Need help planning your vacation to see a Galapagos penguin?

Meet the only penguin species crazy enough to live at the equator! The Galapagos penguin is a cute little fella, and certainly one of the more surprising characters to call Galapagos home. They are also one of the most popular Galapagos birds. Waddling in that cute penguin way on land, or swimming like torpedos underwater. Tourists can't get enough of them. Where else in the world can you snorkel with penguins? That's an impressive opportunity for anyone's bucket list! The Galapagos penguin is endemic to the archipelago, meaning that you can only find them here. So, pack your snorkel gear and camera, and come meet the Galapagos penguin for yourself. One of the most unique and unusual wildlife stories on the planet. 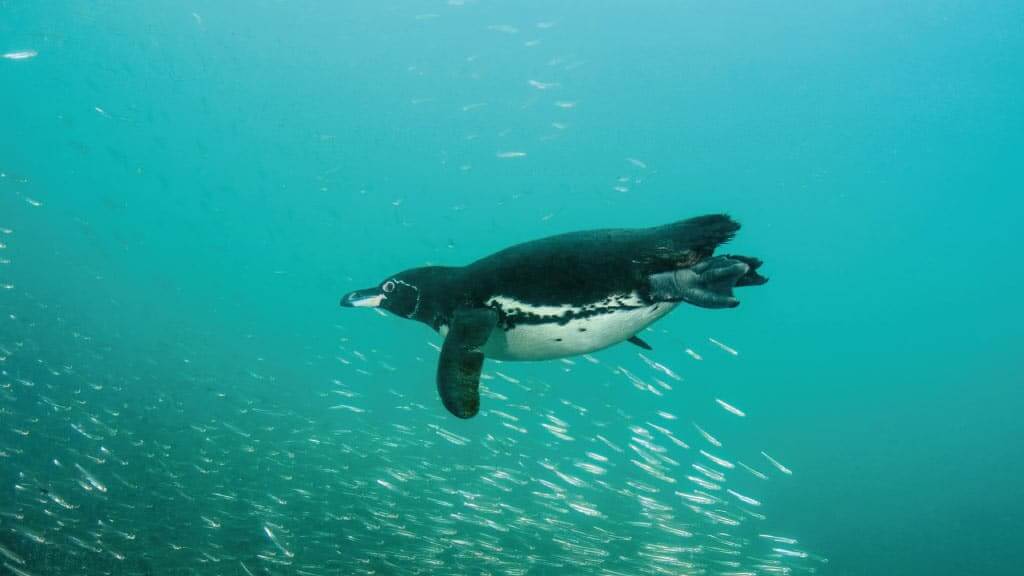 How to See a Galapagos Penguin?

The Galapagos Penguin population totals just 2000 birds. The good news is that they nest and hunt at very specific Galapagos visitor sites. So to a Galapagos penguin you'll need a cruise itinerary to take you there.

WHERE to find a Galapagos penguin?

The largest Galapagos penguin colonies are found on the western side of Isabela island, and at Punta Ezpinosa on Fernandina island. Sightings are very common in this area, but not all cruise itineraries head to the west so be sure to check before booking.

A smaller colony also lives at Bartolome Island. Snorkelers often see them in the water around Pinnacle Rock or close to Santiago island. Sometimes they hunt for fish around Chinese Hat and Rabida too. Bartolome is a common inclusion on cruise itineraries, and can also be visited as a day tour from Santa Cruz. 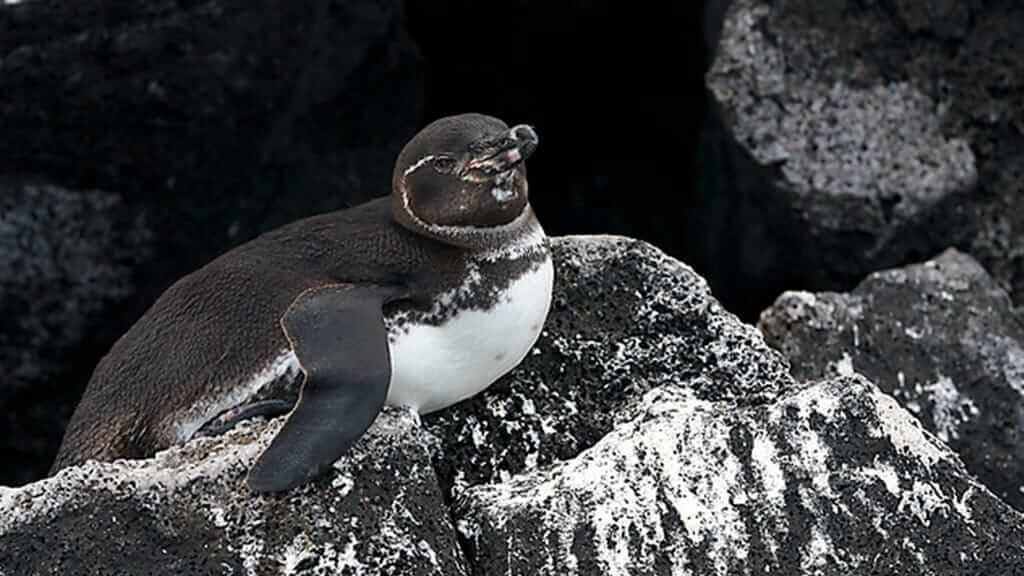 Occasionally Galapagos penguins also hang out close to Puerto Villamil Harbor (Isabela). Keep your eyes peeled as you disembark the ferry. If lucky you might witness penguins zipping around in the clear waters under the boardwalk. They also like to sit out on the black volcanic rocks close to Las Tintoreras visitor site

Galapagos penguins have also been spotted on Floreana island’s northern coast, but this is less common.

WHEN can you see penguins in the Galapagos?

Galapagos penguins can be seen at Galapagos all year round. Their nesting season lasts from May to December. During these months the Humboldt current arrives from Antartica. This is a cold water current, bringing rich nutrients to Galapagos waters. So, the Galapagos penguin takes advantage of the abundant food to produce offspring. This is the best time of year for all Galapagos marine species.

Contact us for a FREE GALAPAGOS TOUR QUOTE with no obligations, or for more information about how to plan your vacation at the Galapagos Islands to snorkel with Galapagos penguins. 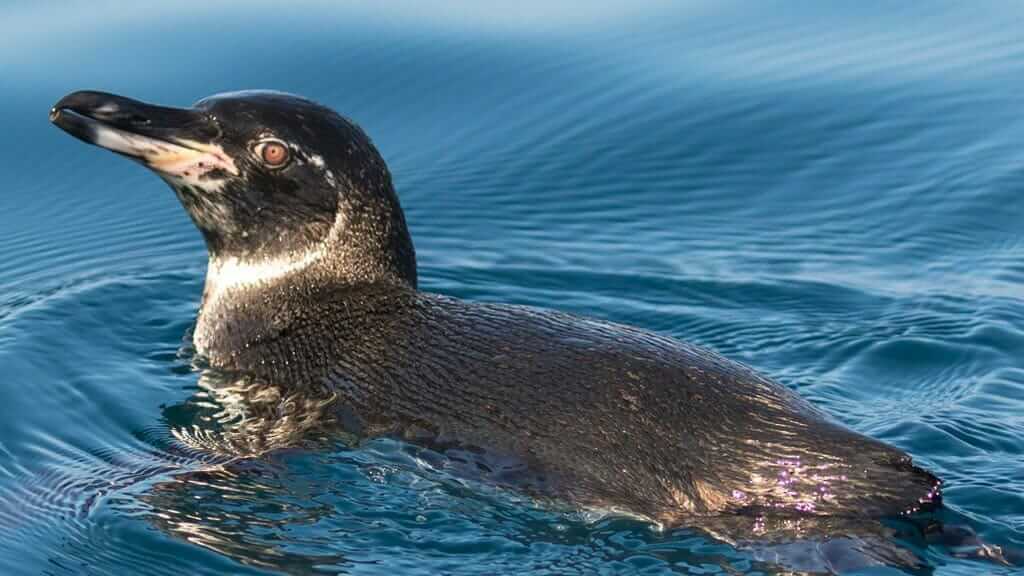 Everything You Need To know About Galapagos Penguins

It's really easy to identifty a Galapagos penguin. For starters they are only penguin species found at Galapagos. In appearance, their bodies are black on the back, with a white underbelly. Their heads are also black, with a white circular border. Their beaks are light pink underneath. They also have a white eye ring surrounding their black eyes.

So, how exactly did a cold water penguin end up living in the tropics? Galapagos penguins are related to the Humboldt Penguin from Chile. They originally washed up on Galapagos shores some 4 million years ago, swimming on the ocean currents. Food sources at the Galapagos islands are plentiful for marine species, so they decided to stay.

Penguin nesting usually takes place between May and January, but varies. Penguins intelligently adapt to their environment, only breeding when natural circumstances allow. They lay one or two eggs per clutch. Both males and females share the work of incubation for 35-40 days to keep eggs cool. After hatching both parents similarly share the toil of rearing chicks and hunting food for them. Dark colored chicks typically fledge after eight to nine weeks.

Similar to other penguin species, The Galapagos penguin is a flightless birds. They are rather clumsy on land, but it's a completely different story in the water. Galapagos penguins swim like streamlined bullets, capable of reaching speeds of up to 35km/h. They are also extremely agile swimmers, making sharp direction changes look easy. 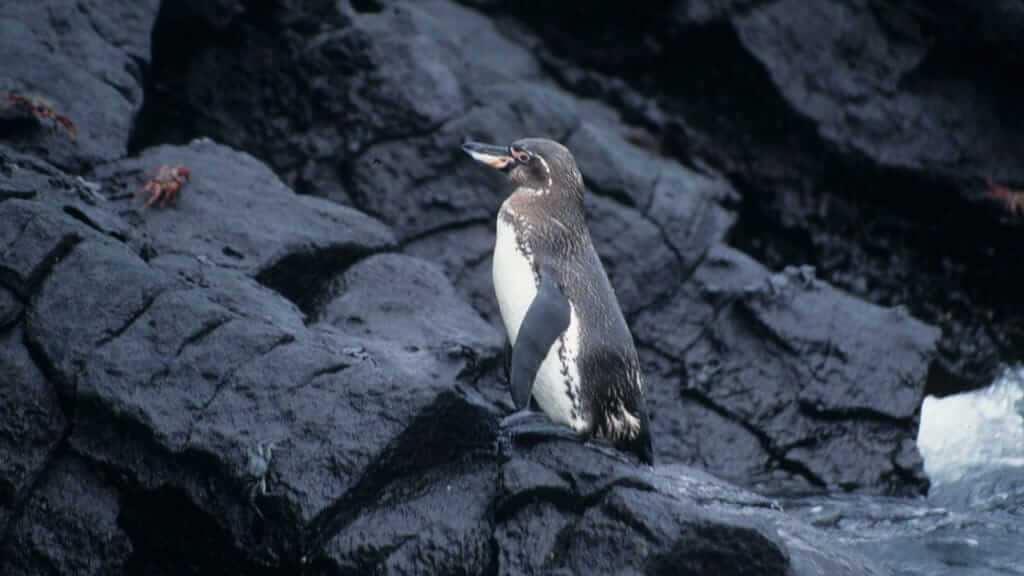 What do Galapagos Penguins eat? Their diet consists mostly of cold water fish such as anchovies, sardines and mullet. On occasion they may also eat molluscs. Hunting is a day time activity, and usually takes place close to penguin nesting sites.

Galapagos Penguins need shade, especially for nesting. They love lava rocks with caves or crevices which provide perfect shelter. Not surprisingly they hang out close to shore with easy access to the sea. At Galapagos they nest close to areas with the coldest water currents.

Why is the Galapagos Penguin endangered?

The Galapagos Penguin is the rarest and most endangered pengiun species in the world. Galapagos penguin predators include Galapagos hawks, short-eared owls, Racer snakes and sharks. But it's not only natural predators that they need to look out for. Invasive species introduced by humans also pose a threat, principally cats, dogs and rats.

What is being done to help the Galapagos penguin?

Help is needed to reverse the decline of the Galapagos Penguin population. An active conservation project is being led by the Galapagos Conservancy. One of the reasons for their endangered status is the lack of suitable nesting sites. Many old nests either no longer exist or are now occupied by Marine Iguanas. So, in 2010, Dr. Dee Boersma of the University of Washington and her team built 120 high quality, artificial nest sites for them to use. Monitoring trips since then indicate that penguins have been putting the nests to good use. The % of juvenile penguins observed in the colony has increased from 45 to 60%.

In September 2020 a research group from the Charles Darwin Foundation reported record numbers of Galapagos penguins nesting at Isabela and Fernandina. The recent La Niña event was believed to have helped, as temporarily cold ocean currents brought more food for marine species. Perhaps also the pause in tourist numbers during the pandemic was also beneficial. 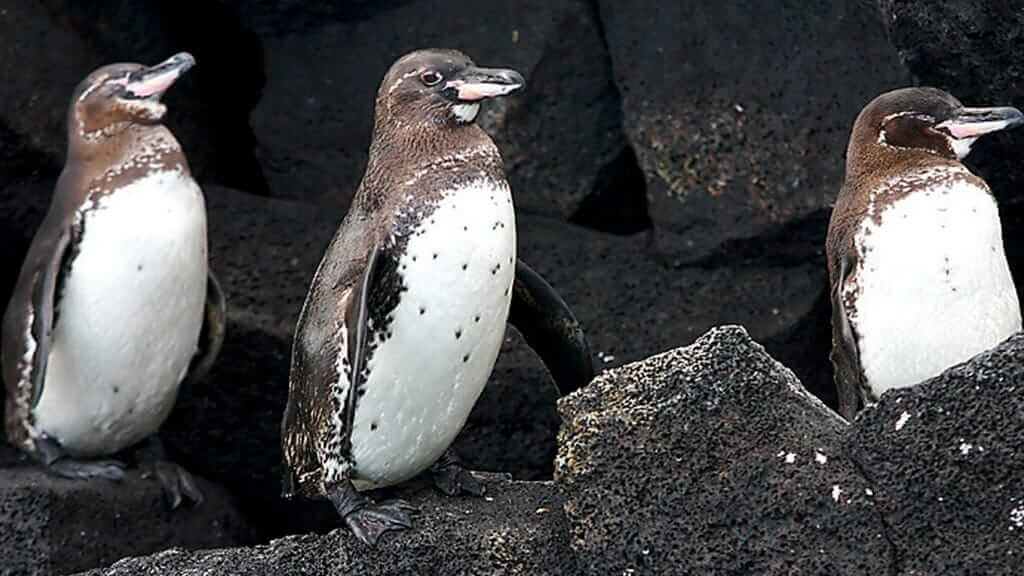 • They are the only penguin species with no set breeding season. They choose to mate when food in abundant, capable of laying eggs up to three times in a good year, or in times of food scarcity they may not mate at all.

• Galapagos penguins are the only species in the world at serious risk of sunburn. In particular their delicate feet are prone to buring. It's for this reason that they walk slighly hunched, leaning forwards to keep their feet in shade.

• Penguins are loyal lovers, mating for life with a single partner. A pair can often be observed preening each other and tapping bills to strenthen their bond and communicate emotions.

Check out our other blog post for more even fun facts about Galapagos Penguins. If you enjoyed this post, then we think you’ll also like our Galapagos Birds orGalapagos Animals blogs.

The Galapagos Penguin is one of the very top Galapagos wildlife highlights. Everyone loves a penguin, but most visitors are left astonished to find them here at the equator. Observing and photographing Galapagos penguins on land is a wonderful experience. But swimming with in the water raises it to a whole new level. Snorkeling with penguins is highly recommended, and for many makes their top vacation memory. So get in touch with us, we'd love to make it happen!