Rabida is known as the red island, and it’s easy to see why. The beach and cliffs of Rabida Island are colored a deep shade of red, like the planet mars. This makes Rabida one of the most photogenic landscape sites at the Galapagos islands. Rabida island has only one visitor site, but what it lacks in size it makes up for in variety. Visitors are given a warm welcome by the resident sea lion colony. Avid bird watchers will love the diversity of sea and land bird species. To top it all off, Rabida island also has fabulous underwater action for snorkelers.

Read on for everything you need to know to plan your visit to Rabida Island. What wildlife to see? Which activities and visitor sites await? Also learn what makes Rabida island red?

• Rabida Island has a resident colony of several hundred Galapagos sea lions. These friendly fellas love to snooze on the red beach, and swim with visiting snorkelers.

• Galapagos Flamingos can often be spotted feeding on shrimp in the brackish pool behind the beach.

• The Palo Santo and cacti forests are home to 9 different species of Darwin’s finches. See if you can identify them by their different beak shapes and sizes.

• Rabida island is one of the best places at Galapagos to see pelicans nesting up close.

• Marine iguanas and lava lizards can be found shading themselves among the red rocks.

• Rabida is a top spot for Galapagos bird watching. On land keep your eyes peeled for Yellow warblers, Galapagos doves, Brown pelicans, Galapagos hawks and Mockingbirds. Waders like pintail ducks and common stilts are common at the lagoon. Sea birds such as blue footed boobies and Nazca boobies frequent the cliffs. 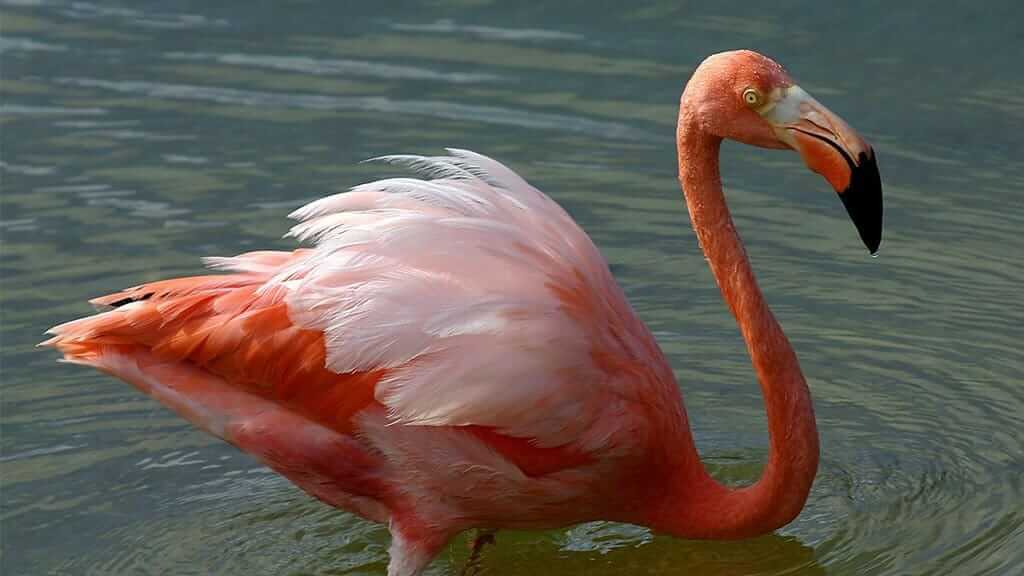 Rabida island is an amazing place for landscape photography. The bizarre red sand beach creates spectacularly unusual images. Good light brings Rabida island to life. Try to catch the scene during the golden hour in early morning or late afternoon. At this time of day the red sand glows bright orange. The bright greens of the opuntia cacti and palo santo trees illuminate. The waters also take on a crystalline turquoise hue. The best view is at the end of the cliff lookout trail.

What makes Rabida island red? The eruptions that originally formed Rabida came from volcanic scoria cones. The lava that poured out was especially rich in iron and magnesium. When exposed to air the iron minerals oxidise (rust), creating a rich red coloring. Over time the lava rocks erode into the red sand that we see today. 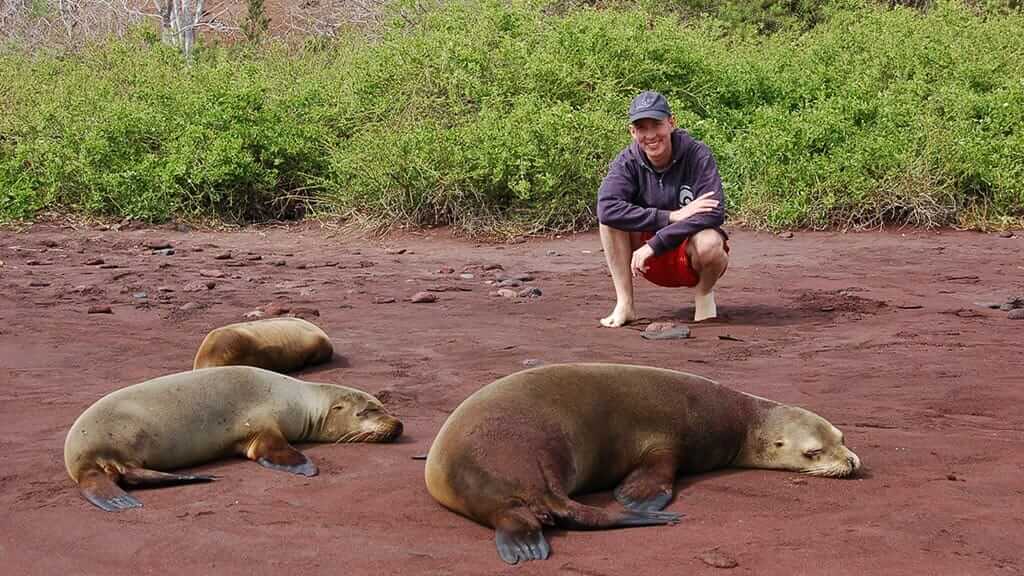 Rabida has a very rocky coastline. The habitat is largely arid and dry. A brackish pool has formed behind the beach, where rain water and sea water have mixed together. This habitat is perfect for flamingos and wader birds. The red cliffs make also make handy perches for fishing sea birds.

Rabida’s original name (Jervis) is in honour of John Jervis. He was an Admiral of the British Royal Navy fleet back in the 18th century. It was later renamed to Rabida island, the name of the convent where Columbus left his son during his voyage to the Americas.

Rabida is a good example of the ongoing challenge caused by introduced invasive species at Galapagos. On two occasions goats have been intorduced on this island, in 1971 and 1975. Goats are a disaster for a small island ecosystem. They will eat literally anthing they see, destroying vegetation, habitat and food sources of native species. Their hooves also stomp unwittingly on iguana eggs. On each occasion the Galapagos National Park Authority was forced to eradicate them.

Rabida island has also suffered rodent problems. Norway rats and possibly black rats arrived at some point over the past half century. Rats prey on iguana eggs, small reptiles, and the smaller native rice rat species. In 2011 the Rabida rat eradication project was successful. It is hoped that native flora and fauna on Rabida will once again be able to thrive.

Where is Rabida Island? 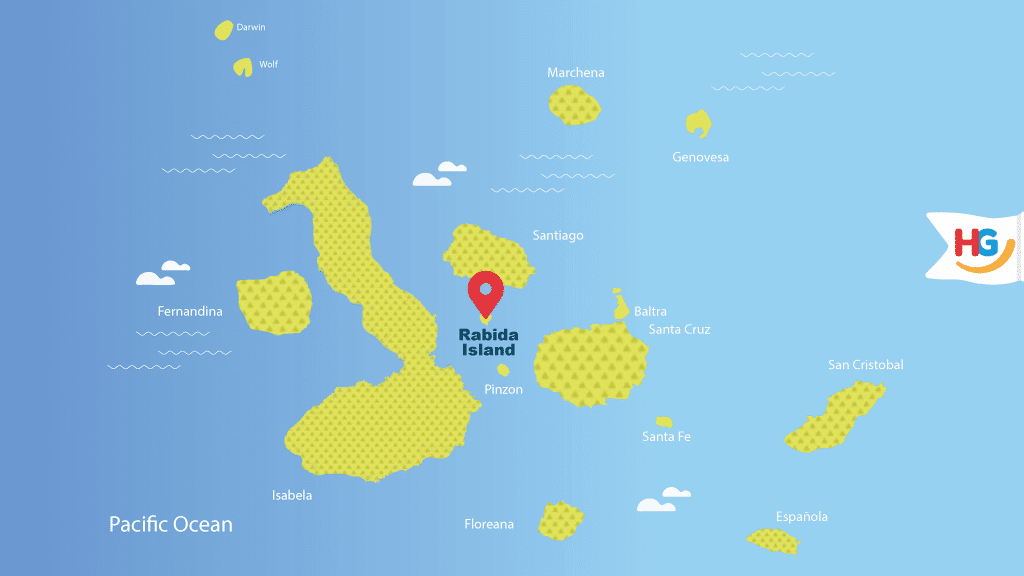 How to get to Rabida Island Galapagos? Unfortunately there are no day tours from Santa Cruz to rabida island. The only way to visit Rabida is therefore aboard a Galapagos cruise. Not all cruise itineraries cover the northern islands, so be sure to check carefully when planning your trip.

Contact us for a FREE TOUR QUOTE, or for more information to plan your Galapagos vacation to visit Rabida Island.

Terrain: An easy trek along the beach, inland, and up to the cliffs. Take care on uneven and rocky volcanic terrain.

Rabida island is small and has just one visitor site. A wet landing drops visitors straight onto the red sand beach, where lazy Galapagos sea lions like to sunbathe. Sea lion photos against the red sand backdrop are specially unique, so don’t be shy with your camera. Also, take a moment to look around at the millenia-old cliffs and lava flows.

Behind the beach there is a brackish lagoon where flamingos often feed. These beautiful birds eat with their head upside down, scooping in mouthfuls of salty water to filter out tasty crustaceans. It is this diet that gives them their distinctive pink coloring, owing to caretenoid pigment. Flamingos are not the only visitors to this lagoon, look out for other wader birds too. Pretty Pintail Ducks and Stilts are also quite common here. 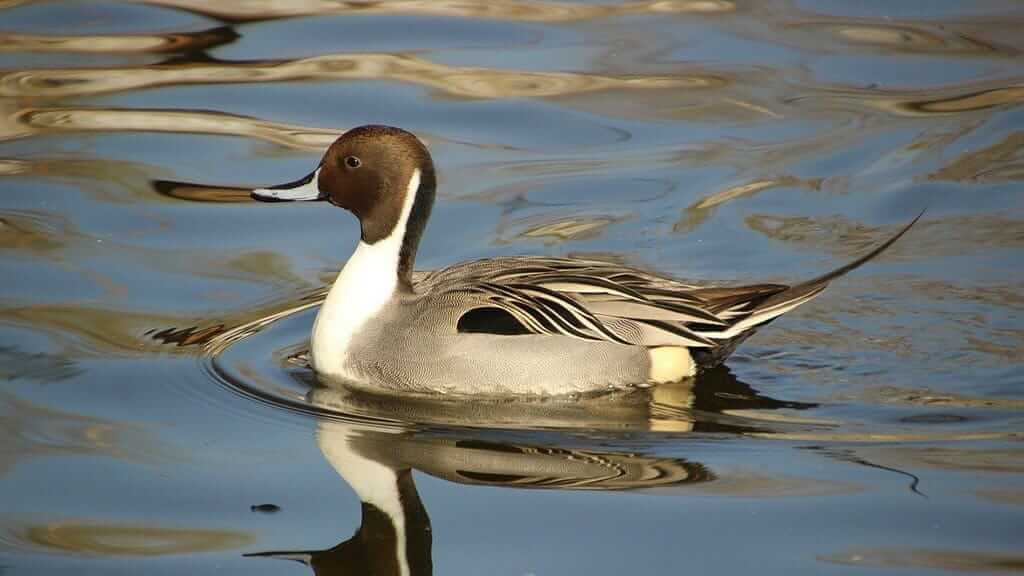 Rabida also has a short visitor trail leading up to the cliffs. The path leads you through a forest of Palo Santo trees and endemic Opuntia cactus (prickly pear). This is ideal habitat for land birds. Incredibly, 9 of the 13 species of Darwin’s Galapagos Finch can be found on Rabida island. Each species can be differentiated by beak shape and size, but this is no easy task. Don’t worry, your naturalist guide will be able to help you make correct identifications. Other land birds to look out for include Galapagos Hawks, Yellow warblers, and large-billed flycatchers. On occasion you might also see a Galapagos snake along the trail. The trail ends up on the clifftop. This is the place for your panoramic photo of Rabida island in all its glory. Booby birds (blue footed and nazca) often perch on the cliff ledge to take a breather from fishing.

That brings an end to your Rabida land visit, but the fun isn’t over yet. Rabida is also an enjoyable snorkeling site. Marine wildlife sightings vary, but reef sharks, sea lions and Galapagos fish are common. 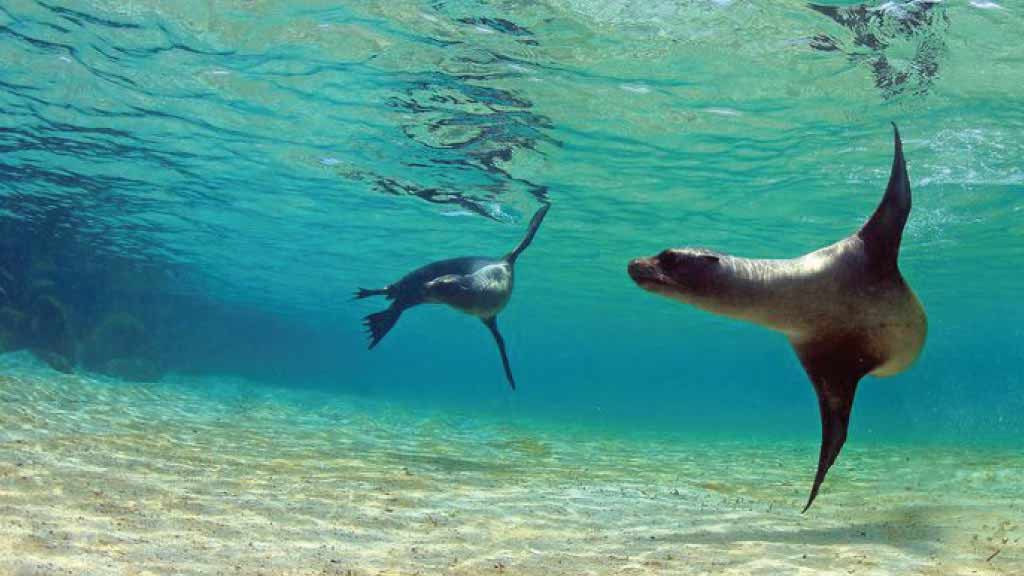 Your guide may also offer to take you around the shoreline in the panga (zodiac boat). This provides a good opportunity to see Galapagos fur seals, pelicans nesting in the salty scrub, as well as boobies up on the cliffs.

In conclusion, Rabida island is unique even by Galapagos standards. The Galapagos islands are home to an array of fabulous beaches, but few are as spectacular as Rabida’s red beach. Activities on this island offer something for everyone. Gentle treking, good snorkeling, top views and sometimes a coastal boat ride. Rabida island’s wildlife is pretty impressive too, especially for bird lovers. Most Galapagos visitors enjoy the variety that Rabida provides, so try to include it into your visit if you can.