One of the more elusive birds to spot at the islands, the Galapagos Short-eared Owl is endemic to the arcipelago. They are a smaller subspecies of the short eared owls that inhabit all continents on the planet. At Galapagos they have adapted some surprising hunting techniques, and are recognised as one of the top land predators. For visitors it can be frustrating to try to spot them, but if you go to the right places with a naturalist guide then Galapagos owl sightings are very possible.

Read on to learn more about the Galapagos Short Eared Owl. Where and when can you see these wonderful birds? How do they behave and what do they eat? Plus lots more fun Galapagos owl facts.

The Short Eared Owl is an ENDEMIC GALAPAGOS SPECIES. 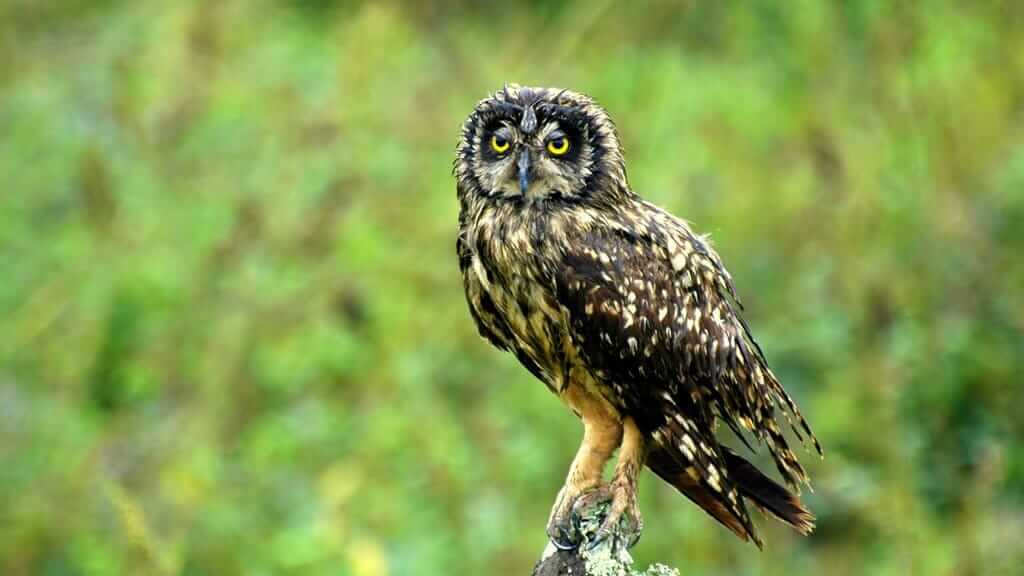 How To See a Short Eared Owl at Galapagos?

The last scientific survey listed Galapagos owl numbers at around 9000 pairs. So they are certainly not a scarce species at Galapagos. The problem is how to spot them – they are notoriously tough little fellas to find. They have highly effective camouflage, and are shy creatures. But don’t despair, follow the tips below to improve your chances of a successful owl observation.

The Galapagos short-eared owl can be found in the highlands of most of the major islands. Perhaps the best place is at Prince Philip Steps (El Barranco) on Genovesa Island. The Genovesa short eared owl lives among lava rocks up on the clifftop, and the visitor trail takes you up close to their habitat. Genovesa also has a large resident Petrel colony, popular prey for hungry owls.

When to see owls at Galapagos?

Galapagos short eared owls can be spotted all year round. On most islands they are most active in early morning and at dusk. The exception is on islands without the presence of Galapagos Hawks. On such islands, without competition, Galapagos owls are happy to hunt right throughout the day.

Contact us for a FREE GALAPAGOS TOUR QUOTE with no obligations, or for more information about how to plan your vacation at the Galapagos Islands. 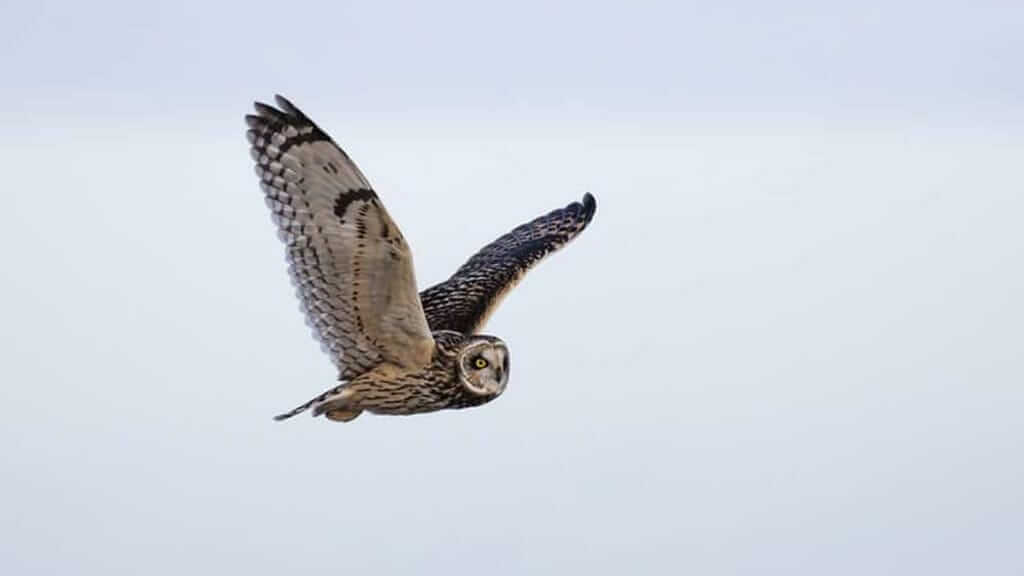 Everything you need to know about the Galapagos Short Eared Owl

The short-eared owl is one of few flying predators at Galapagos. Despite their diminuitive size of just 16inches, they boast an impressive wingspan close to 1 meter. Owl wings are long, broad and powerful. In appearance they have hooked beaks, sharp talons, large yellow/orange eyes, and of course short tufted ears.

Their plumage is a mix of dark and light brown feathers, giving them an edge when hunting. Their coloring is darker than mainland short eared owls, which is is an important Galapagos adaptation. This darker camouflage is highly effective against the backdrop of dark brown lava rocks.

Short eared owls are generally found in open areas of grassland or lava rock flows. They hunt by flying low over these areas, catching prey by surprise. 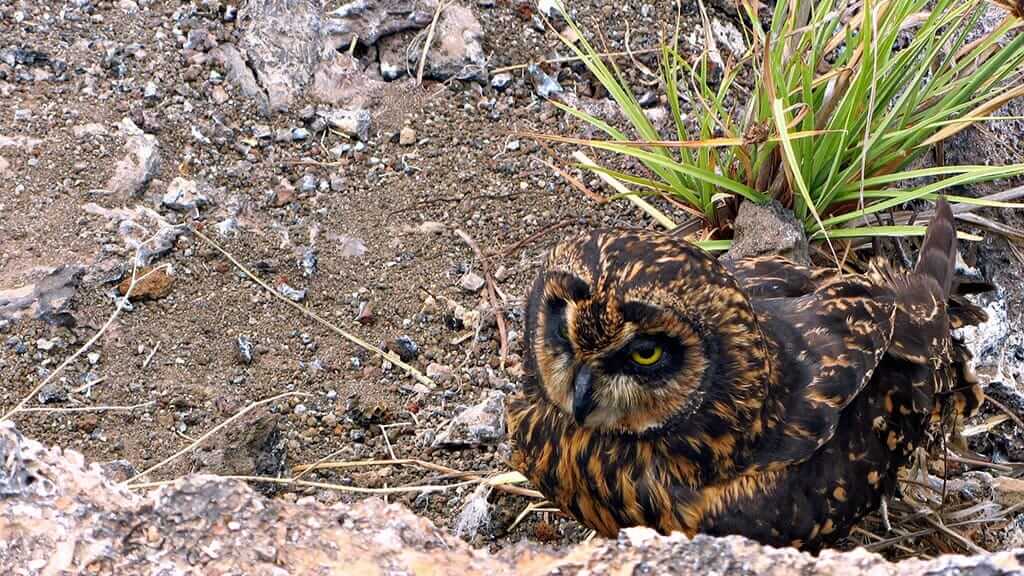 The Galapagos Short Eared Owl has developed some rather interesting behavioral traits at the Galapagos islands.

Firstly, they have learnt to adapt their hunting behavior depending on the presence of the Galapagos Hawk. Hawks are the Apex land predator at Galapagos, significantly larger and more dominant than owls. So the short-eared owl wisely chooses to avoid conflict. On islands shared with hawks the owl will hunt solely at night. Whereas on islands without hawks they will hunt at day or night.

On Genovesa island they have developed an interesting technique to hunt Storm Petrels. The petrels nest in protective tunnels inside the lava where they are well protected. Petrels are also faster and more agile in flight than owls. So the short eared owl needs to be cunning if he wants to fill his stomach. First they stalk their prey carefully, watching and learning where the petrels enter and leave their tunnels. Then they find a place to hide close to the entrance, and catch the petrels unawares as they fly out.

In terms of owl breeding habits, they tend to nest under trees and shrubs, and lay just one clutch of eggs each year. There are usually two to four eggs per clutch, which hatch in 3-6 weeks. Owl chicks are ready to fledge after just one month, and juveniles can already mate one year later. This is a healthy reproductive cycle, and explains why the Galapagos owl populations are not endangered.

Short eared owls are deadly assassins. Their excellent camouflage keeps them hidden from potential prey. Highly tuned eyesight can spot the slightest movement. The owl then takes to flight, swooping in silently before their unexpected prey even realises their mistake.

At Galapagos, the short-eared owl diet is wide and varied. They hunt small rodents, lava lizards, baby marine iguanas, bats and small birds like Storm Petrels. More surprisingly they are also capable of hunting birds that are much larger than themselves. For example blue footed boobies can be hunted by using the element of surprise and striking them at the back of the neck.

Galapagos owls actually play a helpful role to conservation on many islands. Rats and mice are invasive species, and short eared owls help to control their population sizes. This has positive knock-on effects for Galapagos habitats and species. 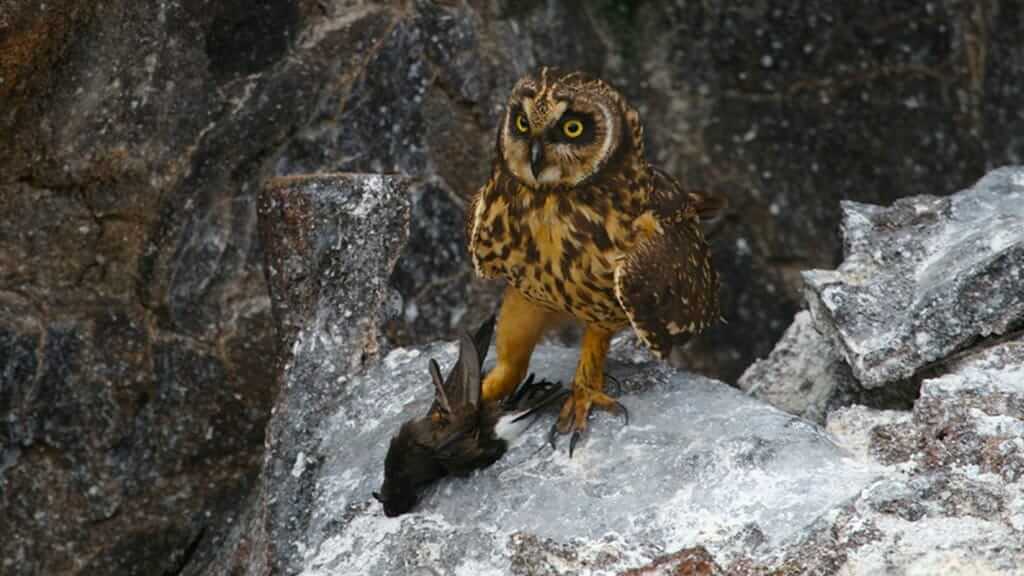 • While most owls hunt at night, the Galapagos Short-eared Owl is diurnal – they have developed the ability to hunt at night or day.

• Genetic population studies of the Galapagos Short-eared Owl shows that these birds are capable of migrating between islands. Curiously though the movements are unpredictable, for example, analyses shows that there has been population movement from Santa Cruz to Floreana Island, but no movements the other way. Why this happens is unknown.

• At Galapagos the short eared owl shares an interesting relationship with rats where both play the role of predator. Adult owls prey on rats, while rats like to eat unprotected owl eggs. 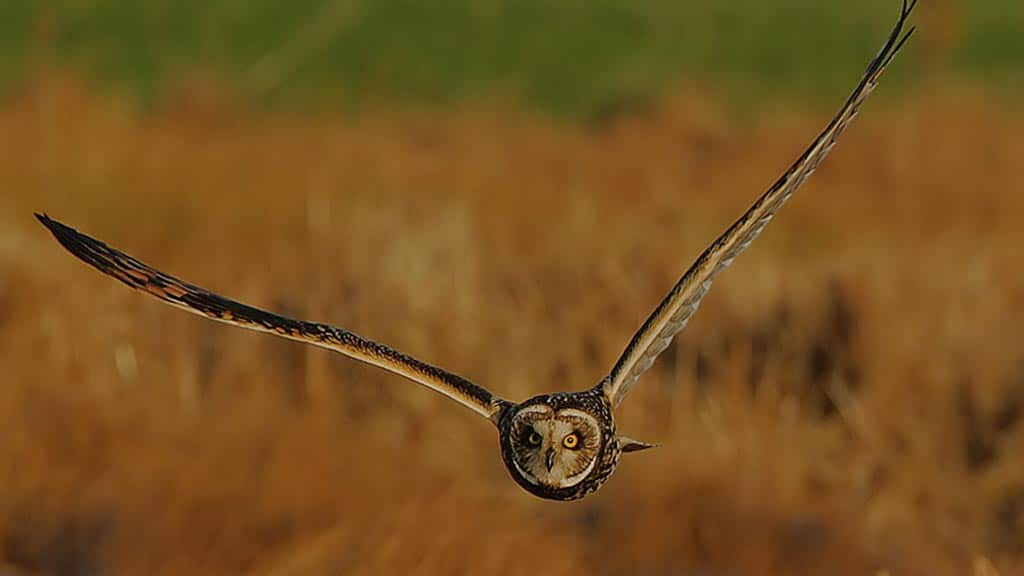 If you enjoyed this post, then why not learn more about Galapagos Bird Species?

In conclusion, the Galapagos Short Eared Owl is a fascinating predator. They have adapted their behavior to hunt diverse prey in Galapagos habitats. They also have an important role to play in the Galapagos food chain. Galapagos owls are beautiful birds, especially in flight. They may not be the easiest Galapagos bird species to spot, but it is definitely worthwhile trying! Lucky visitors will be rewarded with a very special experience.