The Galapagos Racer Snake leapt to instant fame in 2016. BBC Planet Earth footage of them chasing a baby Marine Iguana went viral on the internet, receiving an incredible 13 million views! Everyone was talking about it. Shared relief was felt across the world when the iguana somehow squirmed free of those nasty Galapagos racer snakes.

So let’s see what all the fuss is about (spoiler alert: the iguana manages to escape the snakes by the skin of his teeth).

Terrifying indeed. Not just for the poor iguana, but for most viewers too. Fear of snakes (ophidiophobia) is the most common human phobia, affecting an estimated 1/3 of adults. As a result snakes do tend to get more than their share of bad press.

But let's put our fear aside for 5 minutes. Read on for everything you ever wanted to know about the Galapagos Racer Snake. Which different species of racers live at Galapagos? How and where to see them? Plus lots of fun racer snake facts.

How to See a Galapagos Racer Snake?

Spotting Galapagos Racers is no easy task. Unlike most Galapagos animals they are in fact very shy around humans. They also have wonderful camouflage that keeps them hidden even in plain sight. Our quest is made even harder by the fact that they are diurnal reptiles - most active at dawn and dusk. During the hot hours of sun when most tourists make land visits they are resting in shady hideouts. So Galapagos racer snake sightings are not common.

The best chance is on dry and arid islands. Let your naturalist guide know in advance if you are interested in snakes. He'll be able to help you look for them in the right places. If you are lucky enough to cross paths with a snake during a Galapagos Cruise, then he'll also help with a correct species identification, and tell you much more about them.

Contact us for a FREE GALAPAGOS TOUR QUOTE. We’ll be happy to help you organise your Galapagos vacation to search for Galapagos Racer Snakes, and enjoy the other unique wildlife here. 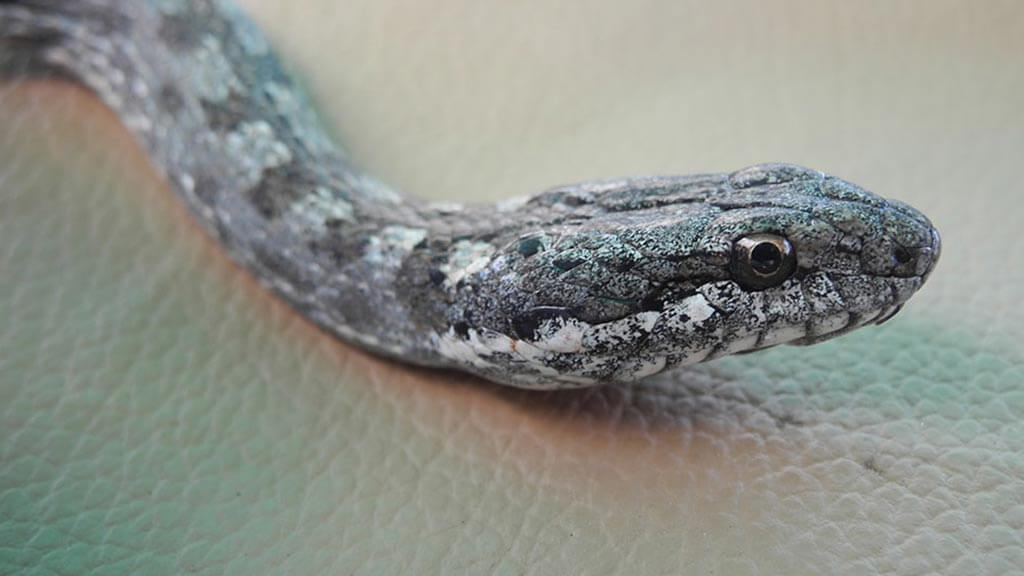 Classification of Galapagos Racer Snake species can be rather confusing. Definitions seem to continually change as more is understood about them. Today, the most common classification is into two broad subspecies: The Western Racer, and the Eastern Racer. Other Racer subspecies do also exist, such as Darwin’s Racer Snake and the Hood (Española) Racer.

Read on to learn more about the two most common Galapagos racer snake species.

Where To See Them: On Fernandina and Isabela islands.

When To See Them: All Year Round.

The Western Galapagos Racer Snake is the largest snake species at the Galapagos Islands. They are longer and darker in appearance than the Eastern Racer. Their range of habitat is limited to the Western islands of the archipelago.

Western Galapagos Racers from Fernandina Island were the stars of the BBC Planet Earth video. Through most of the year they are solitary creatures, making them pretty hard to spot. But all this changes at Punta Espinoza (Fernandina) between May and June, when lucky visitors are in for a treat. This is Marine Iguana hatching season, and Western racers do not want to miss out on an easy meal. They congregate together in groups, and go into a frenzy as newborn iguanas dash for the safety of higher ground.

It is not only Marine Iguanas who need to be on the lookout for Western Racers. Incredibly these snakes have also been observed hunting in groups for sea fish in the rock pools on Fernandina shores at Cape Douglas. This remarkable behavior is unique, and makes them the only species of land snake in the world to have acquired a taste for fish! 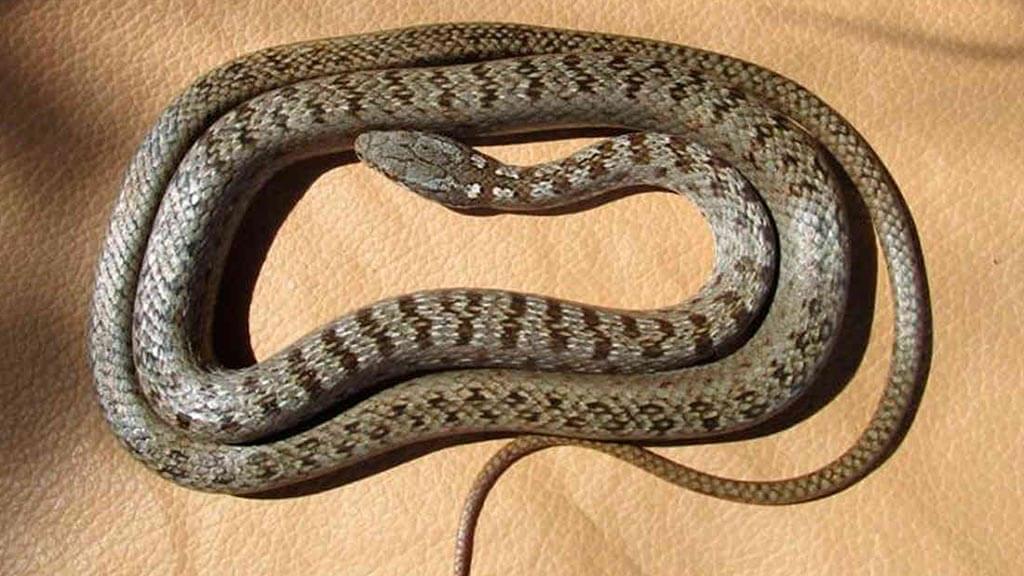 Where To See Them: On San Cristobal island and Champion / Enderby / Gardner islets close to Floreana.

When To See Them: All Year Round.

Eastern Galapagos Racer Snakes can be found on various different islands. On San Cristobal they identified by striped markings, but are uncommon. While on the islets close to Floreana they are more abundant but with spotted markings.

For visitors a good place to look out for them is along the trail running from Baquerizo Moreno town to Punta Carola beach on San Cristobal. This path takes you through their preferred terrain of volcanic rocks and dry shrubland. They are most active during the first hours after sunrise or just before sunset. They have very effective camouflage, so keep your eyes to the ground along the trail.

The Galapagos Racer Snake is small and slim. The average length of an adult is from 0.80 to 1 meter, but they can grow up to 1.25m. Western racers are generally longer and larger than their Eastern counterparts.

Like most snake species, the Galapagos racer prefers a dry and arid habitat. At Galapagos this means dry shrublands & grasslands, and areas around volcanic rocks with hidey holes and shade.

How fast are Galapagos Racer Snakes?

They are capable of racing up to 3.5 miles/hour, making them one of the fastest snakes on the planet. But racer snake speed is not the only concern for their prey. Their camouflage is highly effective for hiding. Their eyesight has evolved to quickly detect the slightest movement. And when they do spot potential prey they are capable of quick bursts of sudden speed.

A writhing mass of snakes might be enough to give you nightmares, but in truth the Galapagos Racer Snake is harmless to humans. They are shy, timid creatures who much prefer to stay out of your way. 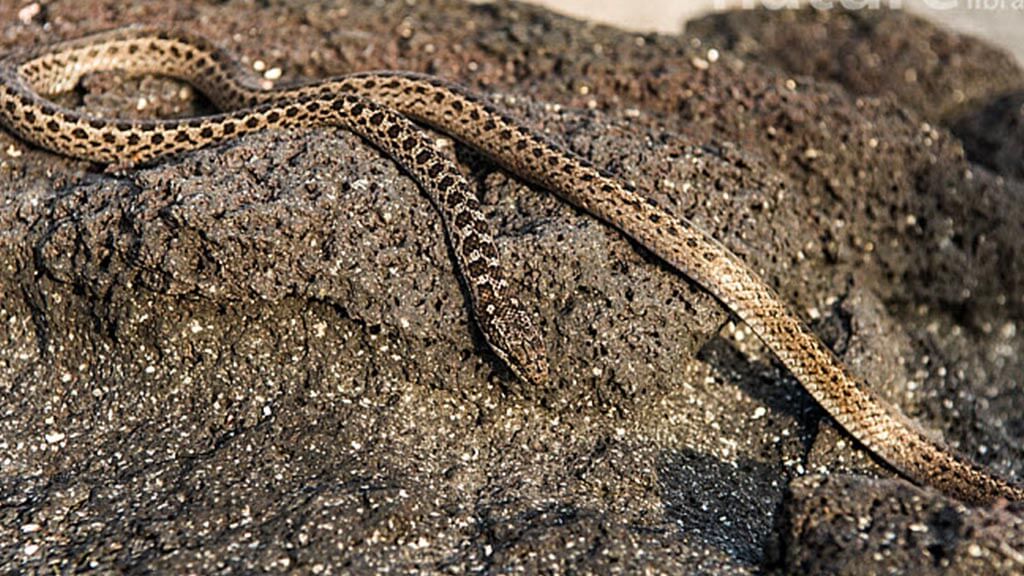 Galapagos Racers are principally constrictors. They wrap themselves around prey and squeeze until suffocation. They can also use small amounts of venom to finish the job if necessary. Their venom is not sufficiently potent to cause harm to humans.

Racers mostly hunt for small mammals and reptiles, such as Lava Lizards, Grasshoppers, Geckos and of course baby Marine Iguanas. Racers will also occasionally raid Darwin’s Finch nests for eggs or small hatchlings. Unlike mammals, snakes don’t chew their food. Instead they to swallow their prey whole, digesting bones and all. They do not have large appetites, and only need to eat once every few weeks.

Is the Galapagos Racer snake endangered?

In truth, little is known about Galapagos racer habits and population numbers. But the Eastern racer is listed as a near threatened species. Their main threat is predation by Galapagos Hawks - the top apex Galapagos land predator. Introduced invasive species also put snakes at risk. Pigs, goats, and cats, for example all enjoy eating snakes eggs.

In conclusion, the Galapagos Racer Snake is a fascinating species. Largely unknown before 2016, they now have a fearsome reputation. Although Galapagos snake sightings are quite unusual, visitors will sometimes cross their path. Don't be afraid, you are truly lucky if you see one. They are afterall now one of the most famous characters at Galapagos!