The Galapagos Dove is one of the most under-rated Galapagos bird species. Few visitors even know of its existence before traveling, but most are quick to snap photos once this attractive-looking bird appears. The Galapagos dove is an endemic species, which means you'll only find them at the Galapagos Islands. They are fairly common birds and extremely tame, perhaps too much so making them an easy meal for early sailors who visited the archipelago. Today visitors will often be able to get up close to tame Galapagos doves, so photo taking opportunities abound.

Read on to learn more about the Galapagos islands dove. Where and when can you see them at Galapagos? How to recognise a them? Plus heaps of other interesting dove facts.

The Galapagos dove is an ENDEMIC SPECIES 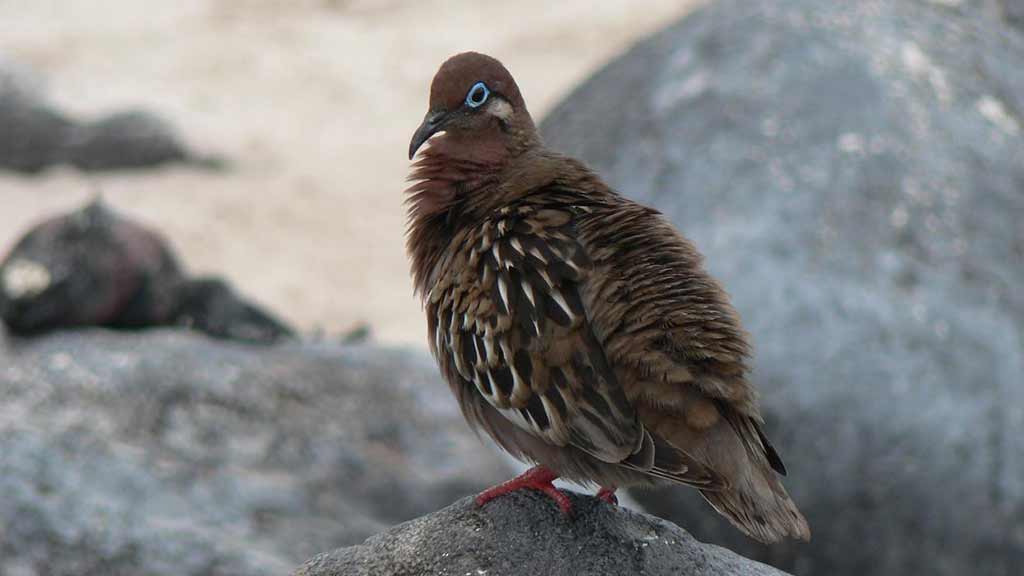 How to See a Galapagos Dove?

Where to see them?: Galapagos doves can be spotted right across the Galapagos archipelago.

When to see them: The Galapagos dove is active all year-round, so tourists can spot them in any month of the year. Their principal breeding season begins a few weeks after the first rains of the Warm and Wet season in January. They can produce up to 3 clutches of eggs each year so watching them nesting or with young hatchlings is a fairly common sight.

Contact us for a FREE GALAPAGOS TOUR QUOTE, or for help planning your Galapagos Islands vacation.

Everything you need to know about Galapagos doves

How to recognise a Galapagos dove?

A Galapagos Dove is quite easy to identify thanks to it’s bold and pretty markings. Adults have a dark red/brown upper body, pink neck, and breast, and streaked brown, white & black wings. Other distinctive features include their sky blue eye ring, salmon pink feet, and downward curved beak. Galapagos doves have strong, thick legs that are adapted to survive on the ground and roam areas with hard lava rocks. Female doves can be distinguished by their slightly smaller size and darker coloring.

In terms of size a Galapagos dove grows to between 18 and 23cm, and can weight up to 88grams.

Doves from Darwin and Wolf islands in the far north west of the archipelago, are larger and darker in color than Galapagos doves found on the other islands. They are in fact a different sub-species named Zenaida Exsul. The Galapagos Dove can be found in open arid and semi-arid areas. They frequent the rocky lowland habitat of scattered trees, bushes and Opuntia cacti. These birds are usually spotted on the ground, and are surprisingly reluctant to fly. If they are in the air it is usually only to cover short distances and only if absolutely necessary.

Behavioral traits of the Galapagos dove

The dove breeding season varies on different islands with no specific month or season, but often begins a few weeks after the first January rains. To attract a mate the male dove calls out to the female and bows in front of her with head lowered, wings dropped and tail raised in the air. Successful dove couples build their nest on the ground, or in abandoned Galapagos mockingbird nests in cacti. Usually two eggs are laid by each nesting couple, and dove chicks fledge quickly in around 2 to 2 and 1/2 weeks after hatching.

They are very protective parents - if the nest is under threat the doves will go out of their way to protect their chicks. They do this via a clever ploy to distract predators away. One adult dove will pretend to be injured, and lure the predator away from the nest with the promise of easy prey, while the other parent guards the chicks.

What do Galapagos doves eat?

As ground feeders the Galapagos dove diet consists mostly of seeds, fruit, caterpillars, and Opuntia cactus pulp. Their downward curving beak is highly adept at picking small opuntia seeds from the ground. Their beak is also strong enough to crack hard seeds that have been cast aside as inedible by Galapagos finches.

• On Genovesa island, due to the absence of bees, the Opuntia cactus plant has had to adapt to different pollinators. The cacti have uniquely evolved to have softer spines which allow the Galapagos Dove to pollinate their flowers while feeding on soft cactus pulp.

• In the past, sailors who visited the Galapagos islands would hunt the Galapagos dove for food. Historic reports observe that whole flocks of doves would come right up to humans, even landing on their heads without fear. So it is no surprise that the Galapagos dove became an easy meal. Today their main threat is caused by feral cats who were introduced by humans. As with most other Galapagos species, they are also affected by habitat loss, especially on inhabited islands.

• The Galapagos Dove is an excellent digger. A single Galapagos dove could remove its own volume of soil in just five minutes, a feat that would take a human over 6 hours to perform!

• Little is known about Galapagos dove population numbers, but the IUCN Red List define this species as Near Threatened with a Declining population trend. The principal threats to Galapagos doves today include predation by invasive species, disease, habitat loss and pollution. Feral cats in particular are a menace on inhabited islands due to the tameness of doves and the fact that they spend most of their time on the ground making an easy target. Whilst there is no active conservation project to directly protect them, they do benefit indirectly from more general anti-pollution and Galapagos habitat recovery projects. In conclusion, the humble Galapagos dove may not be your top highlight of the Galapagos islands, but do spare a moment for them if you happen to cross paths. They are attractive birds, and are not afraid of tourists, so take the opportunity to spend a moment with them. After all, this is the only place on the planet that you will ever see a Galapagos dove!

Our Quito office is temporarily closed for health and safety reasons, but we are still working

. Our dedicated team can help plan and reserve your trip via email / phone / whatsapp - no physical visit to our office is required. Please send new requests to [email protected], or contact our Sales Number + 593 984295830.

We will be back as soon as we feel it is safe for our employees and customers to do so. Thanks for your comprehension.