The Nazca Booby may not have fancy colored feet like other Galapagos booby species, but it is a very attractive bird in its own right. As recently as 2002 the Nazca Booby was scientifically recognised as a unique genetic species. Today, they are a common sight for Galapagos visitors, either nesting on cliffs or flying in search of food.

Read on for everything you ever wanted to know about the Galapagos Nazca Booby. Where and When to see them? How to identify them? Plus lots of interesting Nazca Booby facts and information. 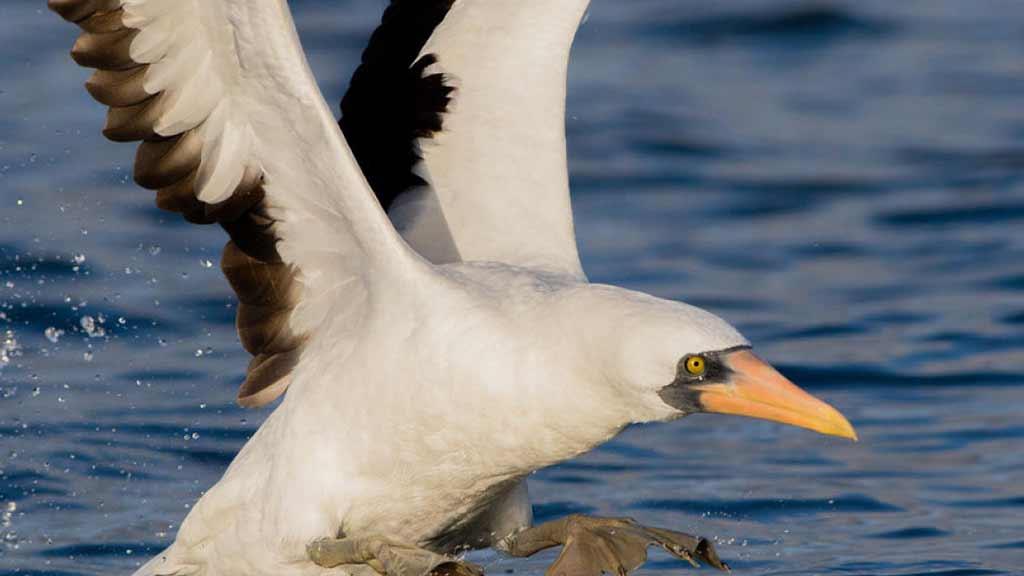 How To See a Nazca Booby bird at Galapagos?

Nazca Boobies are widespread at the Galapagos islands, with around 20,000 breeding pairs. They are globally listed on the IUCN Red List as Least Concern, but with a declining population.

Nazca Boobies can be spotted on Galapagos Land Tour itineraries or on a live-aboard Galapagos Cruise.

Where to see Nazca boobies?

Nazca Boobies are a common sight in Galapagos skies as they search for food. Also look out for them on cliff faces frequented by seabird species. To visit a Nazca Booby nesting colony then try to visit one of the following visitor sites: Genovesa, Española or Floreana islands, or Punta Pitt (San Cristobal).

When is the best time of year to find them?

Nazca boobies are active all year round at Galapagos. To observe their breeding or nesting habits, or see cute Nazca booby chicks then you need to plan your visit around their breeding season. This varies by island, for example on Genovesa from August to November, while on Española island from November to February.

Contact us for a FREE TOUR QUOTE or for help in organising your Galapagos vacation. 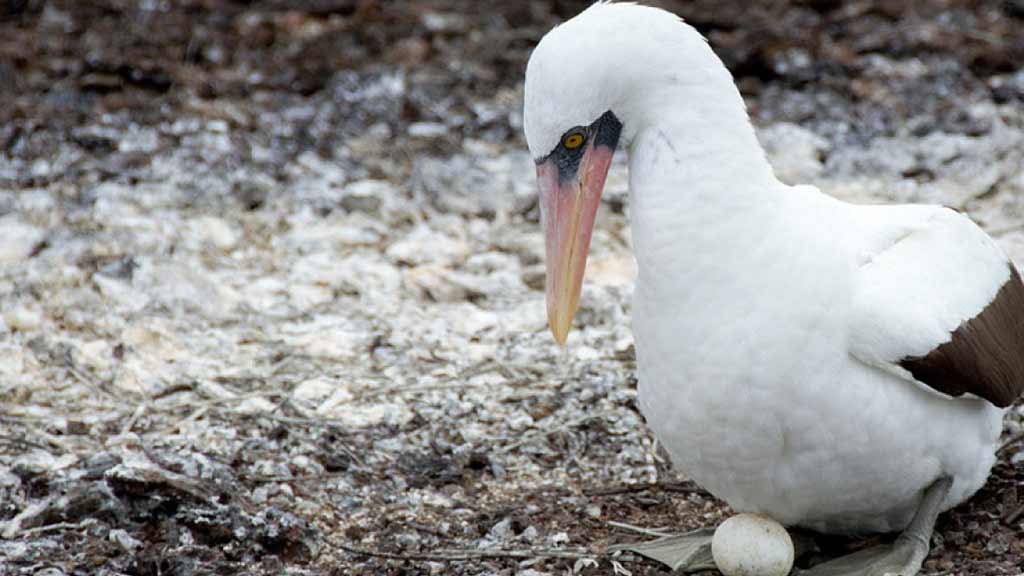 Everything you need to know about Nazca Boobies

How to identify a Nazca Booby

Nazca boobies have a long & sharp yellow/orange colored beak, elegant white plumage, and black markings on their wings, tail and face. Unlike other Galapagos booby species their feet are not brightly colored, but dark grey instead.

The Nazca Booby is the largest of the booby species found at the Galapagos Islands. On average an adult Nazca Booby can grow up to 90cm in height, with an impressive wingspan of 1 and 1/2 meters. Females are slightly larger and heavier than males, allowing them to dive deeper for larger sized fish. Nazca Booby chicks are cute, white and fluffy little things. Their plumage changes grey when fledging.

Nazca Booby range extends right down the eastern Pacific Ocean of Central and South America. Their principal breeding colonies are found at the Galapagos islands as well as Mapelo island in Colombia.

Nazca Boobies prefer to live close to cliffs on rocky ledges, usually nesting on bare ground. Nests are distinguished by a circle of guano, marking out the territory of each individual pair.

During courtship an elaborate mating ritual sets the tone. A male will point its head to the sky (known as sky pointing) to get a potential partner’s attention. If the female is interested she will return the gesture, and they knock their bills together. The male will also give presents to the female, usually sticks or stones. If she accepts these gifts, then the couple pair off successfully to build their nest.

Similar to many seabird species, the Nazca Booby enjoys a long lifespan (20-25 years) but with low reproduction rates and prolonged periods of caring for their chicks. They typically mate just once each year, with one single chick surviving per clutch. The breeding cycle is very tough on a Nazca booby pair, so they will only mate if feeding conditions are optimal. During El Niño years, when warmer oceans mean fewer nutrients and less generous Galapagos fish stocks, a pair will often choose not to breed.

Perhaps the most interesting Nazca Booby behavior is their practise of Siblicide. While some visitors may consider this a gruesome or cruel practise, it is an important part of the reality of natural survival at the islands.

What is siblicide? Put simply it is survival of the fittest among siblings. A Nazca booby pair typically produce two eggs in each nesting season. The first egg hatches around 5 days before the second, giving the first sibling an important advantage in the battle for survival. When the second chick hatches, he finds that the first-born is already larger and stronger. So the dominant Nazca Booby juvenile receives the lion’s share of food, and the parents allow this to happen. Eventually the weaker chick is ejected from the nest by the dominant sibling, and left to die from starvation or predation. 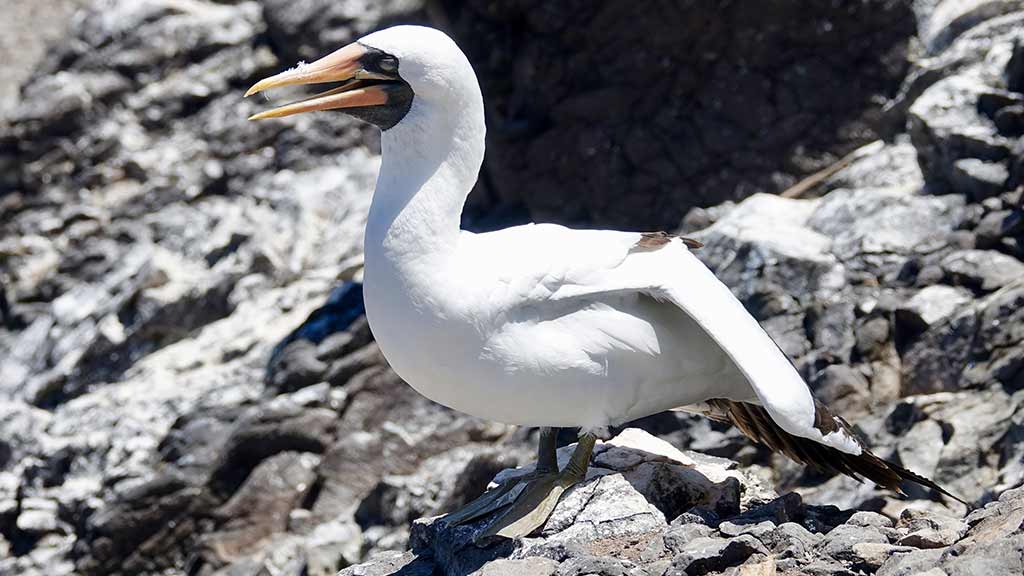 Why do Nazca Boobies practise siblicide?

Scientists believe it to be a strategy to ensure that at least one chick survives. Nazca boobies have a high 25-50% egg failure rate, so the second egg is an insurance policy in case the first one fails to hatch. If both eggs do hatch successfully then the strain on the parents to feed 2 chicks would be too great. So the parents accept the act of siblicide to ensure that one chick (the first born) grows healthy and strong enough to survive.

What do Nazca Boobies eat?

The Nazca Booby diet at Galapagos consists of fish and squid, caught by diving into the water from heights of up to 30 metres. They usually forage in the coastal waters surrounding the islands, and prefer small fish such as sardines, flying fish, or anchovies.

• • The name “booby” comes from the spanish word “bobo”, meaning foolish or clown. This curious nickname originated due to their funny behavior on land when wooing a mate, and their often clumsy take-offs.

• What are the differences between the Nazca and Masked booby? Nazca boobies were in fact originally categorized as Masked Boobies. It was only as recently as 2002 that they were recognised as a unique species with different behavior and genetics. They differ in three principal ways: firstly, Nazca boobies are slightly larger in size. Secondly, Nazca boobies nest on cliff tops, while masked boobies prefer low, flat areas. Thirdly, the beak color of a Nazca booby is more orange than the yellowish bill of a Masked booby.

• The vampire ground finch (Sharp-beaked ground finch) is sometimes known to feed on the blood of Nazca boobies, hence it’s spooky yet rather apt name. 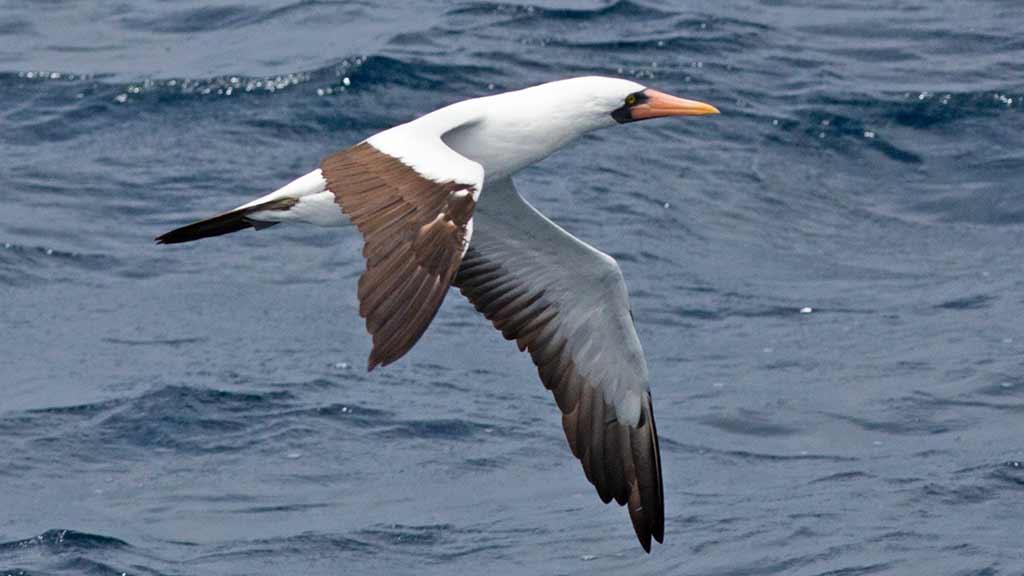 In conclusion, the Nazca booby may not receive the same glory as their blue or red footed cousins, but they are a wonderfully interesting species to spot. They are a fairly common sighting during a Galapagos tour, so keep your eyes pealed for them!