There is a saying in some parts of the world – ‘If you don’t like the weather, wait an hour’, that certainly applies to Quito weather. What is the weather like in Quito Ecuador? Let’s just say the capital experiences an unpredictable pick and mix of climatic conditions, literally four seasons in one day. Most days you’ll need to keep both sun protection and an umbrella handy. The good news though for visitors, is that Quito weather is fresh and spring-like throughout the year – perfect for comfortable exploring.

Keep reading for everything you need to know about Quito weather. What temperatures to expect, differences between the seasons, implications for your packing list, plus lots more Quito climate travel tips. 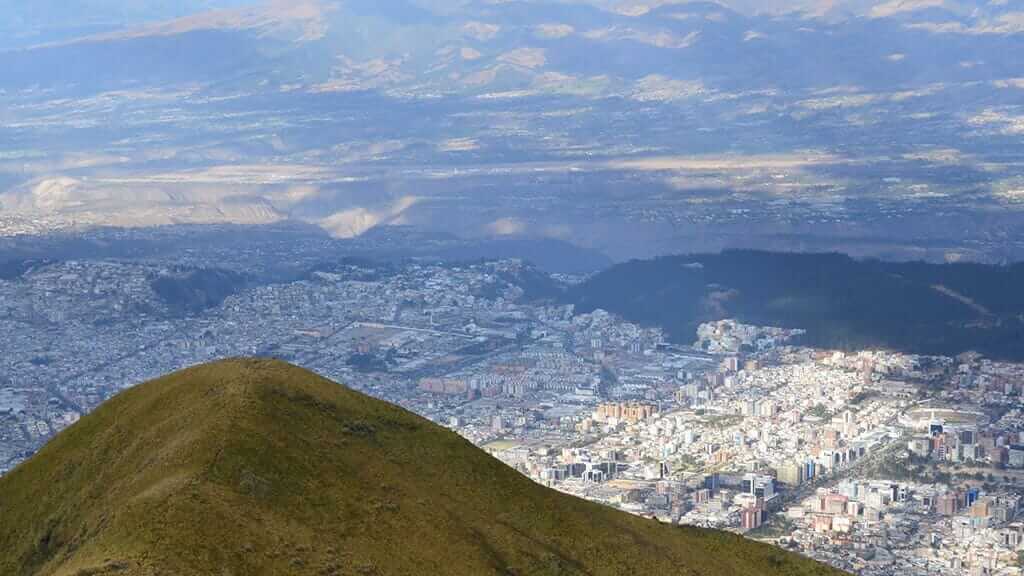 Quito city lies just 26km (16 miles) from the Equator line, so it must be baking hot, right? Wrong! Many visitors are surprised to find that temperatures are in fact pleasantly cool.

Why does Quito have a cool climate? It comes down to the city’s high elevation (2800m or 9252ft) in the mountains. This catches a lot of visitors out. At Quito airport, it’s not uncommon to see new arrivals wearing shorts and sandals, desperately digging warmer clothes out of their suitcase.

Quito’s weather doesn’t adhere to a strict set of standards – many compare it to spring weather in the northern hemisphere. Most tourist visitors enjoy a mix of sun and showers. Temperatures remain relatively consistent - it is usually warm in the day and can be a bit chilly after sunset. Once in a while a mountain storm will blow through with heavy rain or even icy hail.

Perhaps the best word to describe the weather in Quito is “changeable”. Look left for blue skies, right for brewing storms, all happening at the same time in the same city. Locals even go so far as to jokily compare Quito’s climate to the unpredictable mind of a fickle maiden. 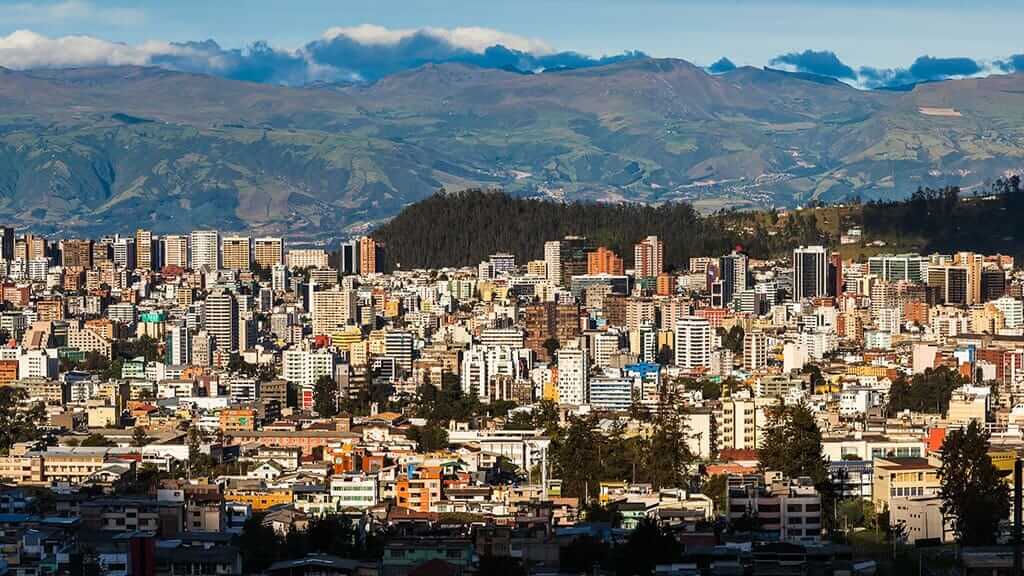 Quito’s next surprise is that the city doesn’t experience the 4 seasons that travelers might be used to elsewhere. Our location right on the Equator means that we have no summer or winter, and the sun rises and sets at the same time right through the year.

What Quito (& Ecuador) does have is a wet and a dry season. Broadly speaking the dry season runs from June and September, with dry skies and strong winds. Quito’s wet season lasts from October through to May, with a higher chance of showers, although not necessarily as a daily occurrence. In truth these two seasons often overlap, and the distinction in weather conditions is not as strictly defined as the season names suggest. 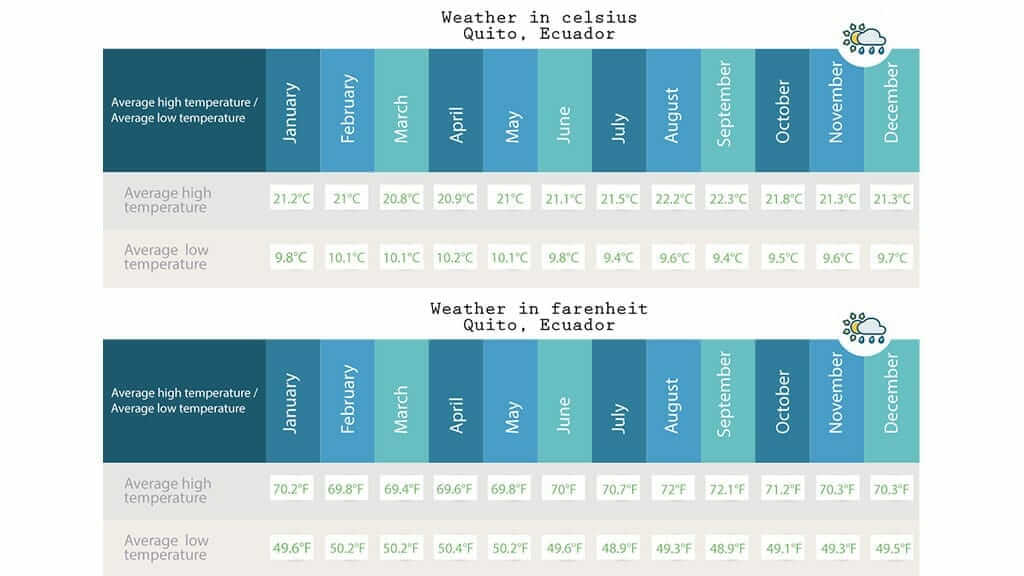 The Quito Ecuador average temperature (low to high) ranges from 49-72 degrees F (or 9-22 degrees Celsius) most of the year. The highs represent midday, the lows are average evening temperatures, highlighting the fact that Quito is not a city of extreme weather.

The consistency of the average temperatures through each month of the year also serves to highlight that Quito does not experience very defined seasons. 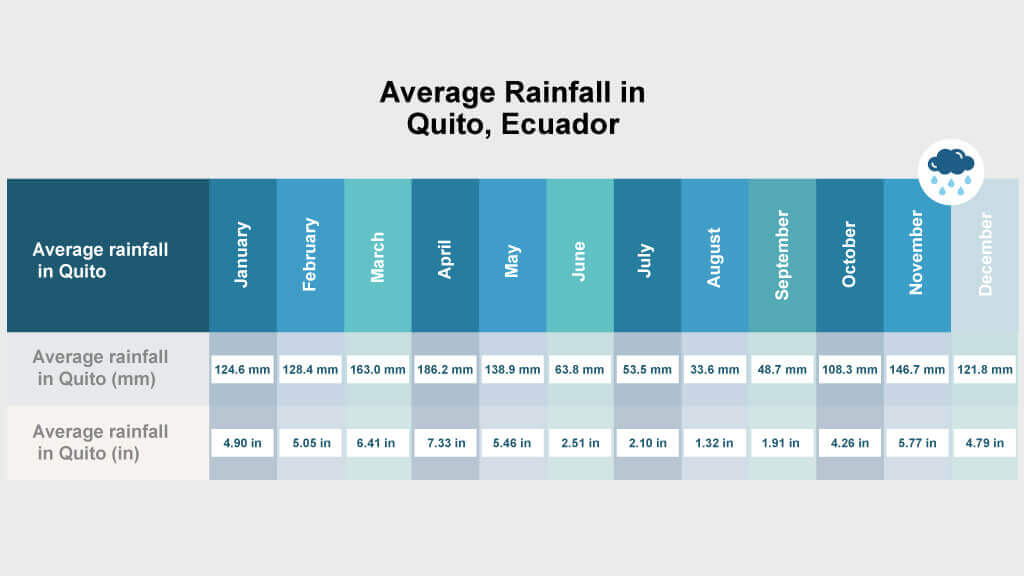 Quito’s rainfall chart shows that wet season months typically receive between 5 and 7 inches of rain, with April the rainiest month. There is even a local saying to back this up: "Abril, aguas mil" (literally: one thousand waters in April). Quito's dry season months only receive on average just 1 to 2 inches of rainfall.

Also, keep in mind that Quito enjoys 12 hours of sunlight each and every day. This is true every month of the year due to our proximity to the equator line. The sun rises around 06:30am, and sets close to 18:30pm. 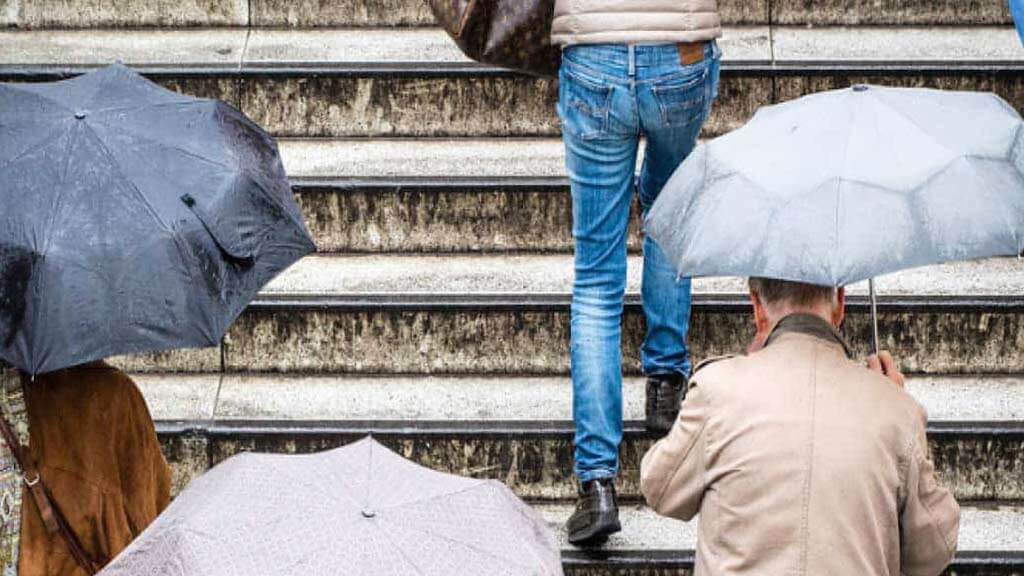 What To Pack for Quito’s Climate?

So, we know that Quito has a year-round spring like climate, give or take a few seasonal variations. What are implications for your packing list?

The good news is that there are no special clothing requirements. You’ll neither need a big winter coat or skimpy shorts for temperature extremes. This makes suitcase packing easy.

The key in Quito though, is to expect unpreditable weather. Just because you enjoy an el-fresco breakfast under glorious sun in the morning, don’t asume that the afternoon skies will look the same.

When you venture out for a day of city exploring, we recommend that your day pack include the following items:

• Extra layers – you might feel great in a T-shirt or shorts in the morning, but Quito’s temperature is known to change at the drop of a hat.

• Rain gear – a light rain jacket or umbrella means you’ll be ready for any showers that pass through.

• Bag cover – an impermeable cover for your day pack will protect cameras or electronics in the case of a heavy shower.

• Sun hat and sunscreen – due to our location at the Equator and at high altitude, Quito´s sun is much stronger than it actually feels. Careful sun protection is a must, even on cloudy days. 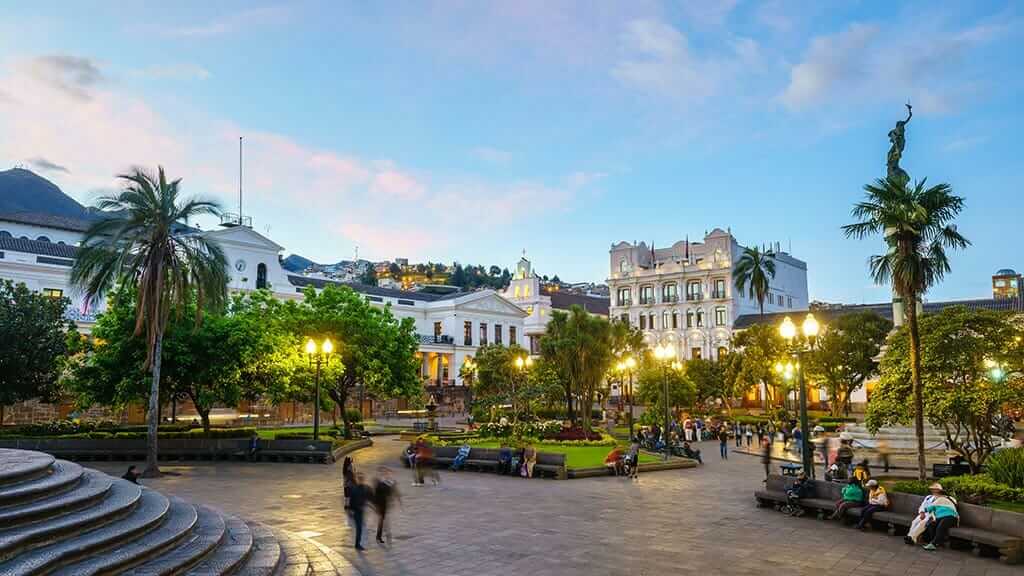 1. The best time of day to explore the capital based on Quito weather patterns is in the morning. Morning´s in Quito have a higher chance of being sunny and clear. So if you´re taking a tour that explores the streets of colonial Quito, or heading up the Teleferico cable car, try to start early.

2. Rainy days don’t mean plans are put on a standstill. Discovering the city’s museums and markets are some options to consider during storms. Quito rain showers are typically more common in mid to late afternoon, but they mostly pass through quickly.

3. Things can change quickly and often at a moment’s notice. If taking a Quito day tour, guides are adept at changing plans when the weather comes in. If exploring on your own, have a few different options in mind instead of a set list, and keep an eye on the skies.

4. During heavy showers the streets of Quito have a tendency to flood as the drainage system struggles to cope. You might have to jump puddles to cross the road, and watch out for cars causing a big splash as they drive through them. Usually within an hour or so the drainage system has recovered, and streets are normal again.

5. Quito is a city full of yellow taxis, sometimes it seems there are as many taxis as people. But the situation changes quickly when the rain starts to fall – finding an empty cab suddenly becomes mission impossible.

6. While Quito weather is often at the top of the list when it comes to making plans for exploring the city, it should not be a big worry for visitors. There can be exceptions to this statement, but the city’s year-round pleasant temperatures make it a fun place to explore during both the wet and dry seasons.

7. Another thing to remember is that each region of Ecuador has its own distinct seasons, so don´t trust Quito weather as being representative of other regions. On the coast & at the Galapagos islands, daily temperatures and humidity is higher. Their wet and warm season starts in December and runs through to May. The jungle’s rainy season, while being a constant, is lightest between November and March. Much of the Andes highlands is similar to Quito, but with temperatures varying based on altitude. The higher you go the colder it becomes.

Contact us for FREE TOUR QUOTE in Quito, Ecuador or the Galapagos Islands. Well be happy to share more information about Ecuador weather conditions to help you plan the perfect vacation.

In conclusion, the comfortable, spring-like Quito weather makes trip planning easy. Quito is a year round travel destination with almost constant average temperature, and just small variations in rainfall. No extreme heat, humidity, snow or cold to contend with. However, what every Quito visitor should prepare for is a daily climate predictable in it´s unpredictability. Expect four seasons in one day, pretty much every day.

John is the original founder of Happy Gringo Travel and a travel veteran of 80+ countries worldwide. Originally hailing from London UK, he's been living in Quito since 2003, and has traveled extensively right across Latin America. Travel has been a life-changing experience for him, and he loves to encourage others to discover new horizons and explore off of beaten tourist paths. Besides travel his other life passions are wildlife & nature, reading, history and sports (as well as writing the occasional blog post).
Dear Customers,