The Galapagos Marine Iguana is one of the more curious creatures found at the Galapagos Islands. It is the only lizard in the world to have learnt how to swim and dive. They can physically shrink in size when times are tough. Marine iguanas are found in contrasting colors and sizes on different islands. Plus they sneeze salt from their nostrils. Curious creatures indeed! Marine iguanas are a common Galapagos sight, and very popular with tourists. So, let's get to know them a little better through some fun marine iguana facts.

Keep Reading to learn the remarkable story of the swimming lizard. We give you 12 fun Galapagos marine iguana facts, plus heaps more information besides about the curious creatures that Charles Darwin described as “Imps of Darkness.” 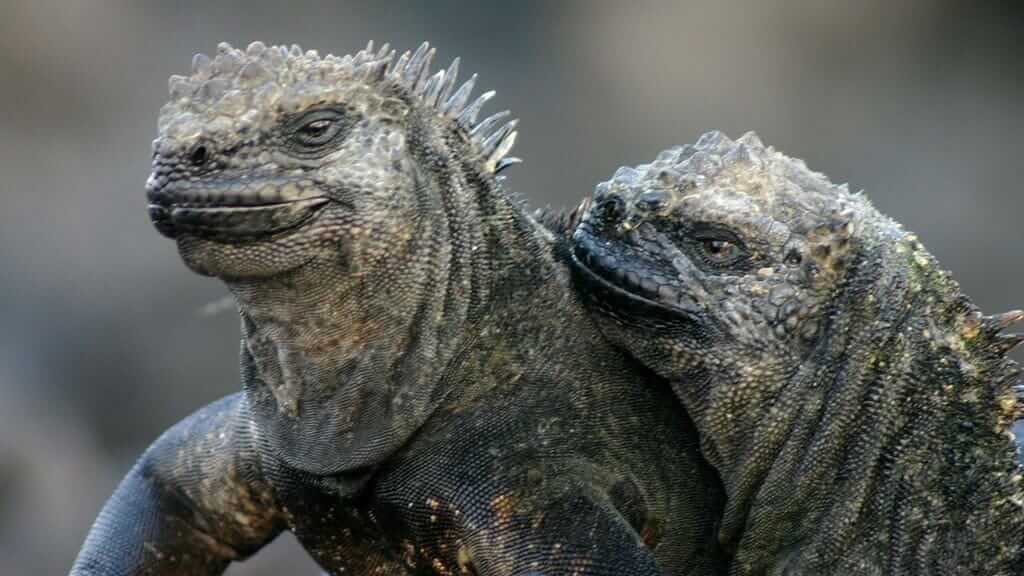 1. What is the difference between land iguanas and marine iguanas?

Land iguanas live only on land, and have a golden / yellow coloring. Marine iguanas nest and live on land, but learnt how to swim in order to forage for food. They tend to be smaller with black / grey coloring.

Both species are likely descended from the same South American mainland iguanas that originally arrived to the Galapagos islands. The first wave of iguana arrivals found few food sources on the barren volcanic islands, so adapted to feed on marine plants. The second wave of iguana arrivals came a long time afterwards when land plants had begun to colonise the islands, so land cacti and other plants provided a more convenient food source for them.

2. Why did marine iguanas learn how to swim?

The first iguanas at Galapagos faced a fierce battle for survival. On land the black volcanic rocks were barren, with plants few and far between. So iguanas needed to adapt and evolve quickly in order to survive.

The main priority was food. At that time the only green food source was found in the sea. So they had to learn to swim and dive to fill their stomachs, evolving into the Galapagos marine iguana species we find today. 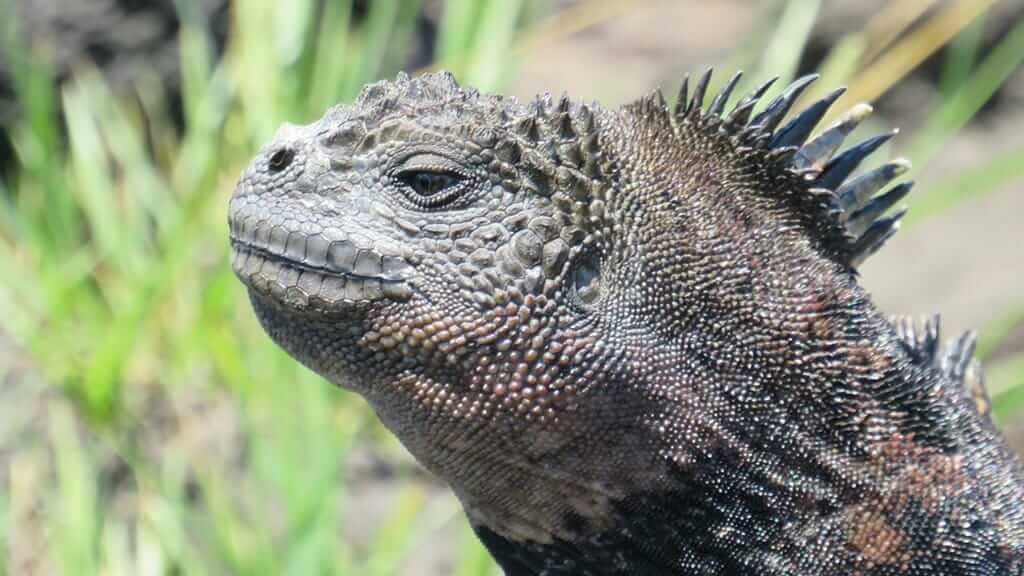 3. Why do marine iguanas have sharp teeth?

Galapagos marine iguanas need sharp teeth to saw off tough seaweed from rocks underwater. But that was not the only adaptation required to survive and thrive at the Galapagos islands.

They also evolved a special blood pigment to hold more oxygen - essential for long dives underwater of up to forty minutes at a time.

Claws became longer to grip onto slippery rocks while eating.

They also developed powerful, streamlined tails to guide them through the water.

4. Where can you see marine iguanas?

Marine iguanas are endemic to the Galapagos islands, meaning that you can only find them here.

Typical Galapagos marine iguana habitat is on sandy shorelines close to black lava rocks. They need sandy terrain to dig their burrows, while the black lava provides protection during the day. Of course they also need to be close to the sea, for daily dives for food. 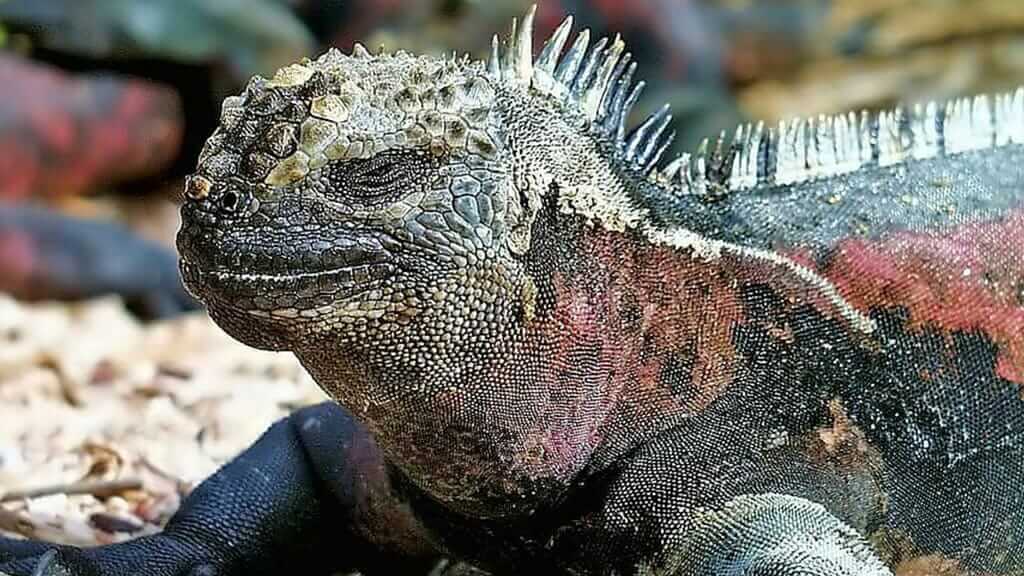 5. Why are marine iguanas black?

Marine iguanas are cold-blooded, so their dark color helps to keep them warm by absorbing more sun. The Galapagos waters can be quite chilly, so they need an effective method of heating up quickly after diving for food. It’s a common sight to find marine iguanas huddled together in large groups for warmth, sunbathing on the black rocks.

Marine iguana colorings do change, however, in mating season (January to March). During this time visitors can enjoy iguanas in bright shades of red, green, turquoise and orange. If visiting Espanola island look out for the Christmas iguana, famous for it’s coloring similar to a Christmas tree.

6. Why do marine iguanas spit salt?

Marine iguanas sneezing salt is a funny sight at Galapagos. After swimming in the sea they need to expel sea salt from their bodies. So marine iguanas have developed special glands in their nose to filter out salt, and literaly sneeze it out. Visitors can often see an accumulation of salt on top of their heads, encrusted in white as a result. 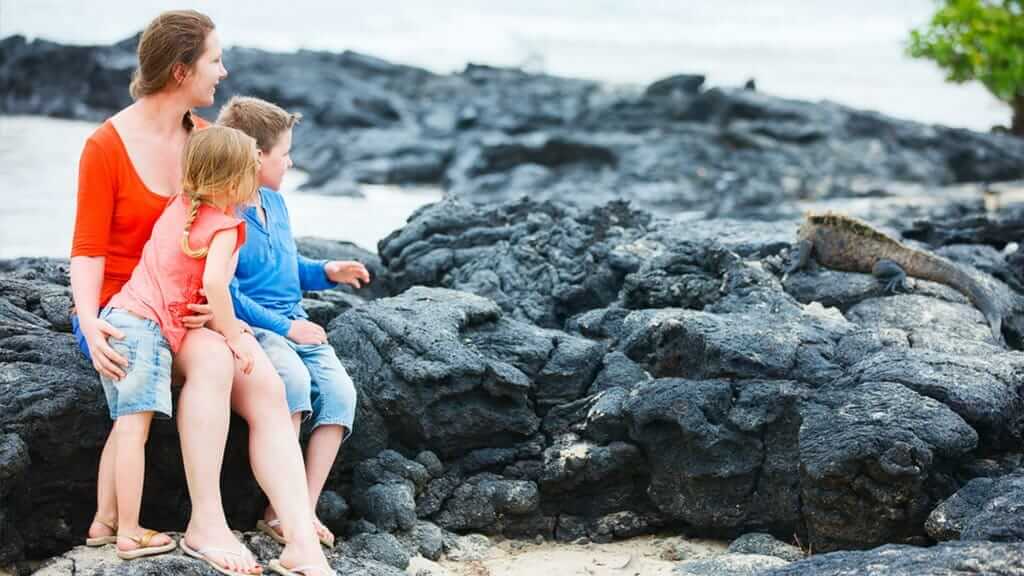 7. Why do marine iguanas shrink in size?

In times of scarce food the Galapagos Marine Iguana has developed an ability that almost no other animal can do - it shrinks! Quite literally, bones become smaller and their skeleton retracts. This means that they can eat less without becoming malnourished. As soon as food returns they then grow back to their original size again.

Remarkably scientists have found that they can shrink by as much as 20% of their body mass. This is quite an amazing adaptation to help them survive in tough times.

8. Why are marine iguanas endangered?

Today the marine iguana population at Galapagos numbers between 200,000 to 300,000 individuals. They are listed as Vulnerable and in decline by the IUCN Red List. But why is this?

Firstly, baby marine iguanas have a long list of predators. Hawks and snakes in particular hunt them in large numbers during hatching season. Invasive species like rats, cats and dogs are also a threat, feeding on marine iguana eggs and young. Galapagos conservation projects are ongoing to eradicate introduced species, and return habitats back to their original state.

The El Niño weather phenomenon is another big risk for Galapagos marine iguanas. El niño occurs every decade or so, affecting the whole coast of South America. It causes a small rise in sea temperatures, which in turn reduces the important nutrients found in the ocean. Fewer algae, plankton and nutrients means fewer fish, which also means hungry marine iguanas. Severe El Niño events mean that no hathlings survive, and also causes a huge dent in adult population numbers (70% loss in El Niño 1982/3). It takes many years afterwards for marine iguana colonies to recover. 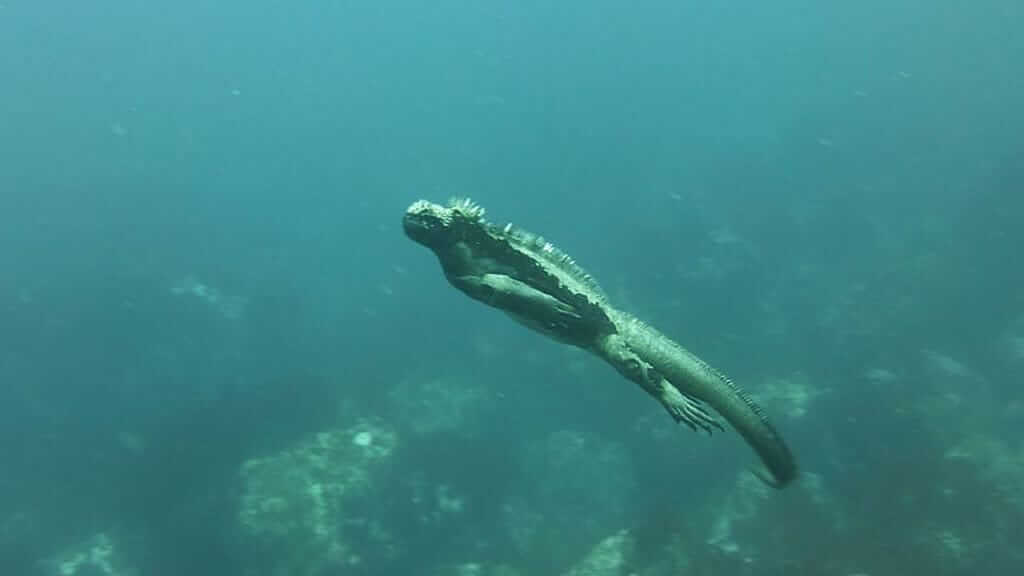 9. Can marine iguanas slow their hearts down?

Incredibly, yes they can. When swimming, marine iguanas heart rates drop to half of that on land. This helps them to stay beneath the sea for extended periods of time. It is also helpful in avoiding one of their main predators – sharks! Galapagos shark species sense movement in the water, even the beating of a heart could give a marine iguana away. So a slower heart rate means less chance of being detected (and eaten) by sharks.

10. How long do marine iguanas live?

Marine Iguanas can live on average for up to 12 years in the wild, and grow up to five feet long.

Suprisingly the answer is yes, but only on one island and in unusual circumstances. South Plaza island is unique in that the territories of land and marine iguanas overlap. This has resulted in some interbreeding between the two species, producing a new Hybrid Iguana.

While the hybrid iguana is not a seperate species in itself, it certainly is a curiosity for visitors. Hybrids are dull grey in color, and limited in numbers because they are sterile and thus unable to reproduce. They are very elusive to spot on South Plaza island, but if you do visit this island keep your eyes open for this fascinating quirk of nature. 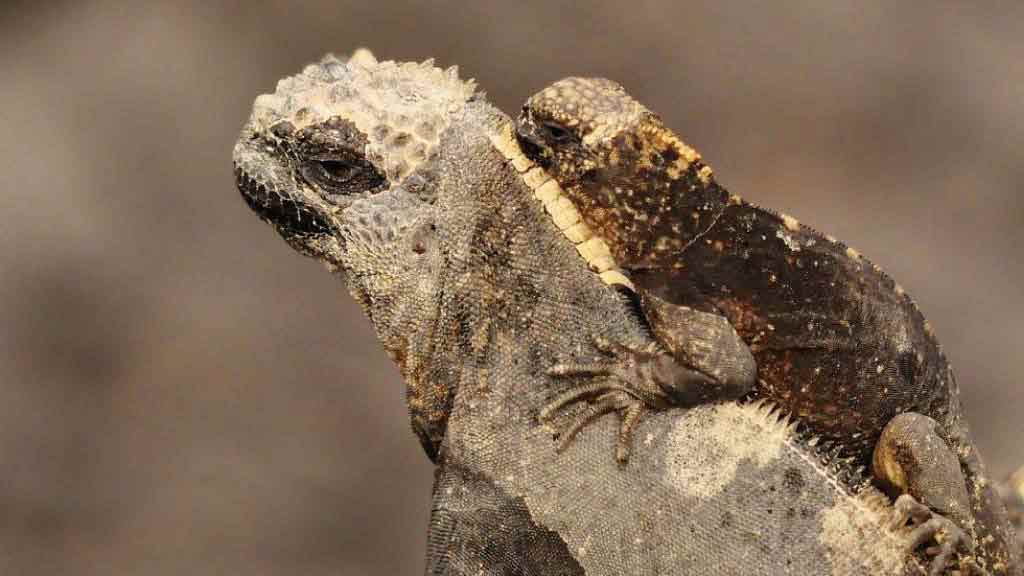 12. What is the story behind the viral marine iguanas on social media?

A baby marine iguana leapt to fame in 2016. BBC Planet Earth footage of a gang of Galapagos racer snakes chasing the poor iguana went viral overnight on the internet, receiving an incredible 13 million views! Literally everybody was talking about it. Shared relief was felt across the world when the iguana somehow managed to squirm free of a writhing mass of nasty snakes, escaping to the safety of rocky ground. If you want to see what all the fuss is about, check out our Galapagos Racer Snake blog to watch the youtube footage.

Baby marine iguana hatchlings face this terrifying challenge every year on Fernandina island. The large snake population sits waiting for iguana hatchlings to emerge, and not all iguana babies are as fortunate to escape as on the BCC video. 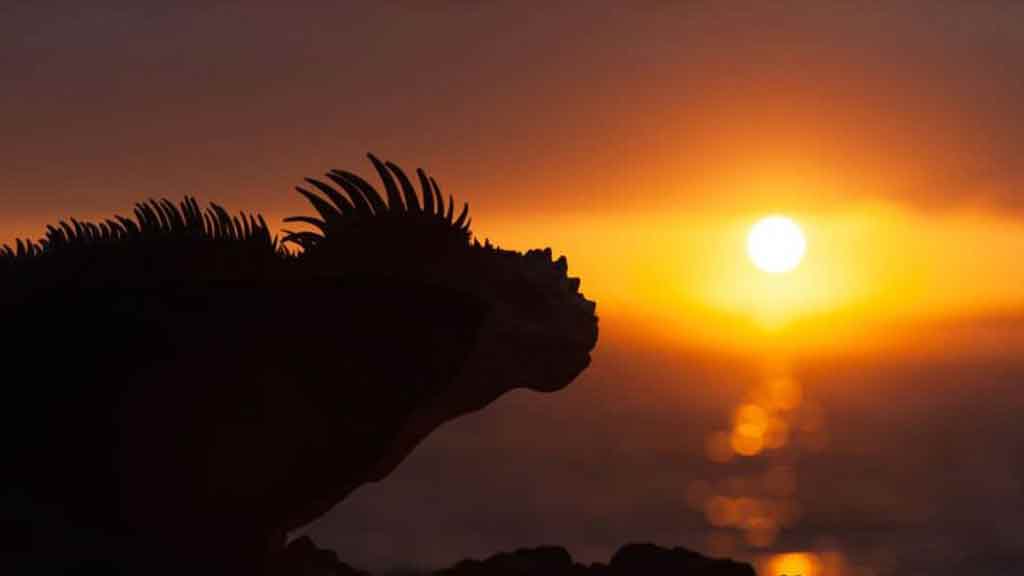 Contact us for a FREE TOUR QUOTE or information to organise your own trip to the Galapagos islands. Cruises and land tours are great ways to see Galapagos marine iguanas in person.

We hope that you enjoyed learning our fun Galapagos Marine Iguana facts. Check out our more detailed blog about the Marine Iguana, including where & how to see them. Even better come see these curious fellas for yourself! It’s surprisingly easy to organise a vacation to Galapagos with our help, and there are lots of other amazing Galapagos animals and birds to see too!

Powered by Convert Plus
Dear Customers,