South Plaza island has impressive wildlife plus good snorkeling, but also offers something a little different to other Galapagos islands. South Plazas is blessed with spectacular vegetation, bringing the island to life with spectacular colors. A dense carpet of vibrant red and purple Sesuvium combines with unusual prickly pear cacti to wow visitors. South Plaza island is also home to a colony of unique hybrid iguanas, and many nesting sea birds. So, come check out South Plaza for yourself!

Read on for everything you need to know to plan your visit to South Plaza island at Galapagos. What wildlife can you see here? Which activities and visitor sites await tourists? Plus learn about the unique and elusive South Plaza hybrid iguana.

• South Plaza is home to a large colony of 1000+ Galapagos sea lions. This is strictly a bachelor pad, where retired, battle scarred male sea lions mingle with young adolescent wannabes.

• South Plaza is the iguana island. This is the only place at Galapagos where Land iguanas share territory with marine iguanas. The result is a third population of interbred hybrid iguanas. 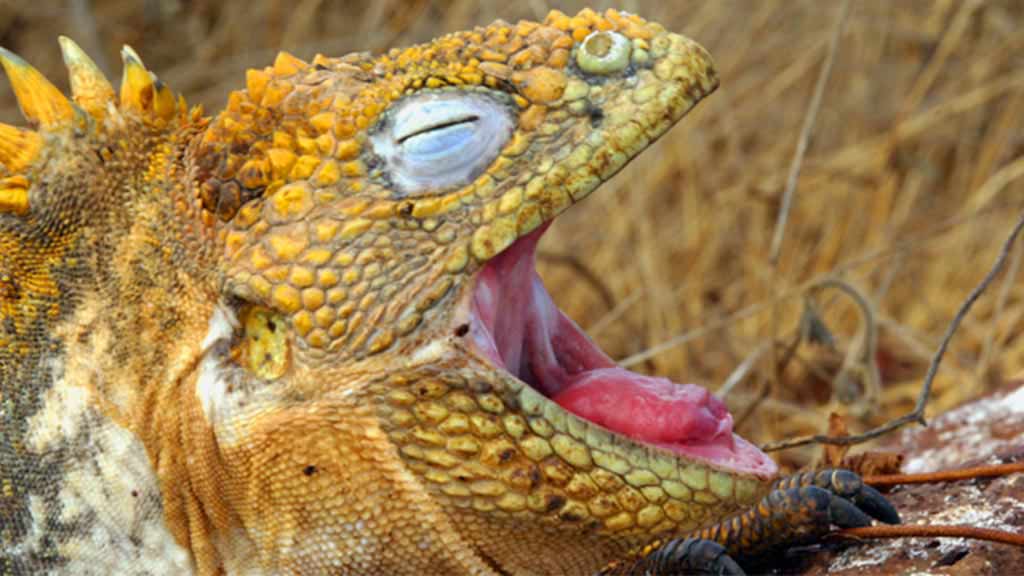 Actually there are two Galapagos Plazas islands, North and South. Both are small crescent shaped land masses off the east coast of Santa Cruz island. Of the two, only South Plaza island can be visited by tourists. North Plaza is reserved for scientific and conservation purposes.

South Plaza island was formed by volcanic uplift of the ocean floor. The cliffs to the south of the island were subject to a greater degree of uplift compared to the northern coastal beaches.

Various different habitats can be found at South Plaza. The shore line is a mix of white sand coral beach and rocks, where sea lions laze away their days.

Steep cliffs form the highest point of the island, where sea birds nest on the plateau and rocky shelves. 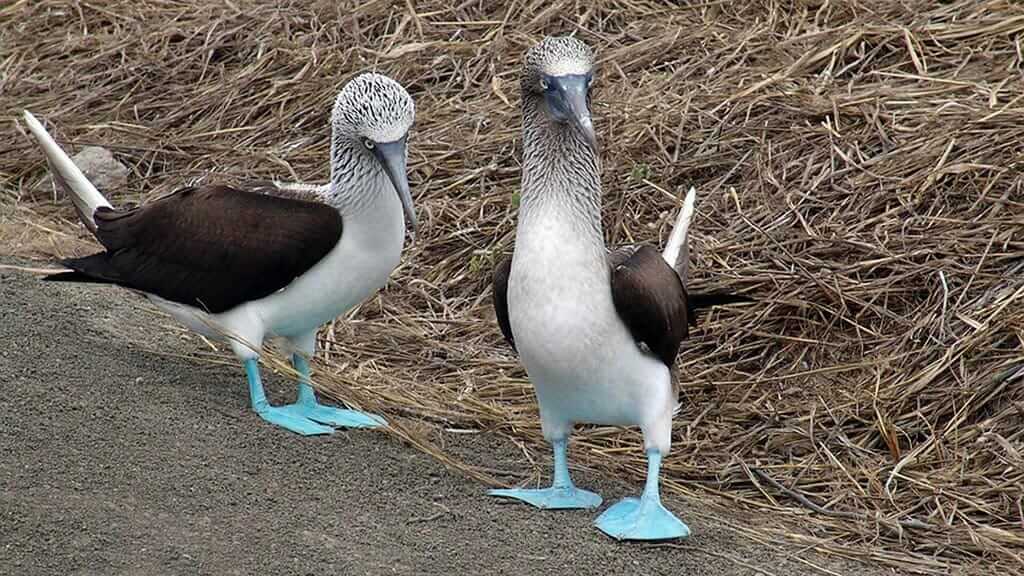 The island floor is covered with Sesuvium, also known as Galapagos Carpetweed. During the rainy season (February to May) the carpet is lush green. But in the dry season (June to January) the colors change to spectacular red, orange and purple tones. This contrasts with green opuntia cacti and white lichen rocks for a wonderfully eye-catching vista. Even more so if a sea lion or land iguana happens to wander across the multi-colored carpet.

Sesuvium is a very clever plant, adapting to its environment with considerable expertise. During the dry season it survives by losing as much Chlorophyll as it can, to the point of starving itself to death. This causes the plant to absorb less light, and lose it’s usual green color. Once the rains begin in January it returns to producing regular levels of chlorophyll, and turns green once again.

The other notable plant on South Plaza island is the Prickly Pear Cactus (Opuntia Cactus). Not only are cactus forests very photogenic for landscape snaps, but they are also a vital food source for many Galapagos wildlife species. On South Plaza, land iguanas rely on fallen cacti fruit and flowers in their diet. Cactus Finches also dine on Opuntia, as well as nesting in their branches.

South Plaza island’s unique claim to Galapagos fame is as the only island where land and marine iguanas live together in overlapping territories. These two species are of course very different in terms of size, coloring and behavior – so it’s easy to tell them apart. Except that interbreeding between the species here has produced a new Hybrid Iguana.

While the hybrid iguana is not a seperate species in itself, it certainly is a curiosity for visitors. Hybrids are dull grey in color, and limited in numbers because they are sterile and thus unable to reproduce. They are very elusive to spot on South Plaza island, so keep your eyes open for this fascinating quirk of nature.

Where is Santa Fe Island? 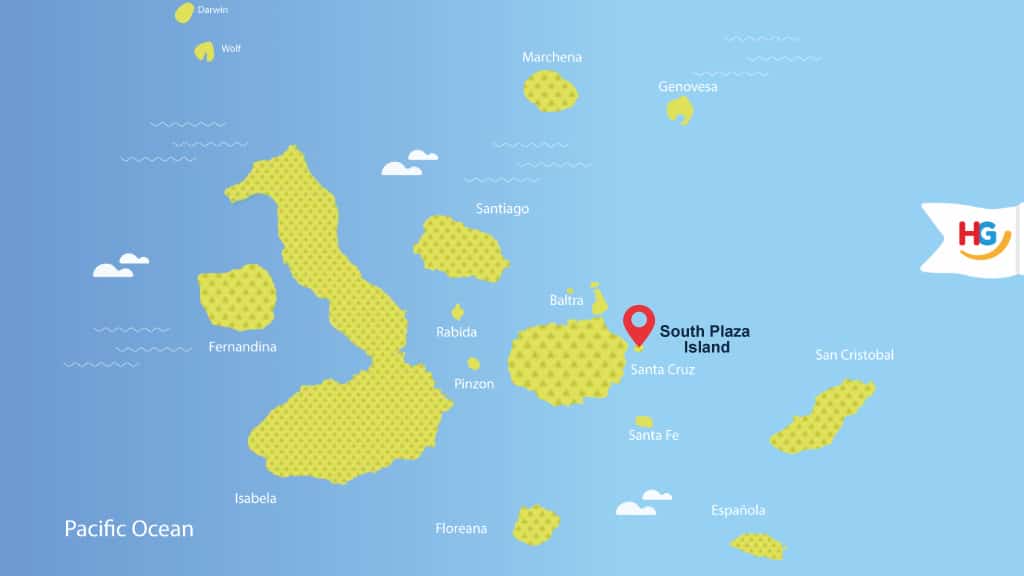 How to get to South Plaza island? There are two ways to visit. The first is to take a South Plaza island day trip from Santa Cruz. It is quite a long day with 2 hour navigation each way, but a rewarding experience that can also be incorporated into a Multiday Land Tour. The other way is to join a Galapagos cruise with an itinerary that includes South Plaza.

Contact us for FREE GALAPAGOS TOUR QUOTE, or for more information to plan your Galapagos vacation.

Being such a small island, South Plaza has only one visitor site.

After a dry dock landing the trail begins. Our first wildlife encounter is with a large and noisy sea lion colony. Marine iguanas also frequent the shoreline, drying off under the sun after diving for algae. You might see them expelling sea salt through their noses by sneezing.

Continue up through an Opuntia cactus forest with colorful Sesuvium carpet. From June to January the plants mix in a vibrant explosion of wonderful colors. Land iguanas hang out under the cacti, waiting for fruit or pads to fall to the ground. They eat them spines and all. The South Plaza land iguana is the largest in population numbers, but they are the smallest Galapagos iguanas in terms of physical size. Cactus Finches also nest in the forest, flitting from tree to tree to feed on the juicy fruits.

The trail continues upwards on a gentle incline to the cliff plateau, with wonderful panoramic views. This is the perfect spot for bird lovers, with significant sea bird colonies. Blue footed and Nazca boobies nest here, fishing in the nutrient rich waters below. Swallow tailed gulls, Tropicbirds and Shearwaters are also common sights. The volume of bird action can be quite overwhelming. Also keep your eyes to the sky for Galapagos Hawks.

Heading back down to the dock takes us to a large colony of bachelor sea lions. Only males are welcome here. Either elder sea lions past their prime, or young adolescent males not yet strong enough to control their own harem of females. 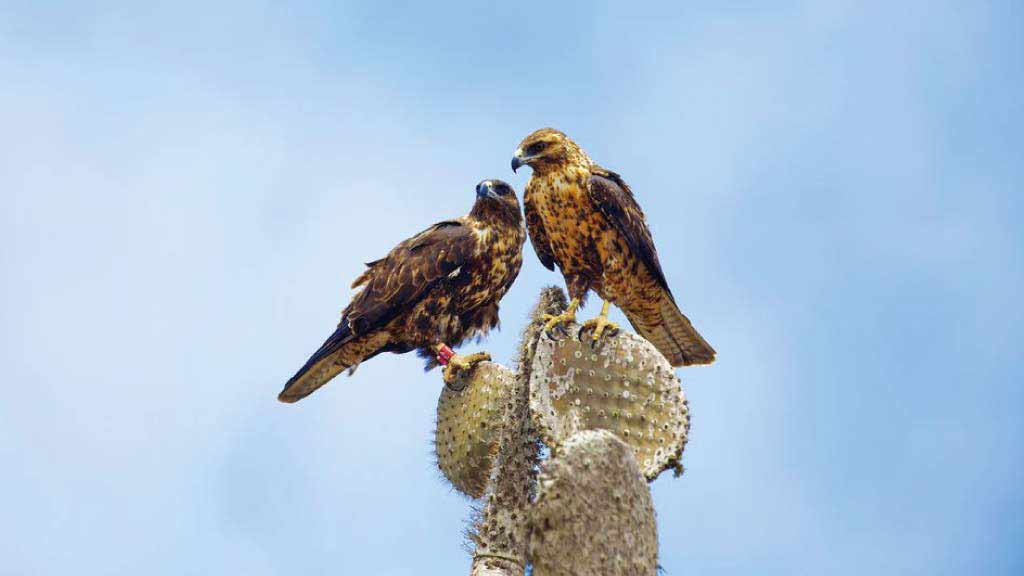 South Plaza has a nice snorkeling site located in the channel between the North and South Islands. There is plenty of interesting marine life to explore around the coral reefs. Reef sharks and sea lions are often active here, and a myriad of colorful fish cruise around the coral. There is also a chance to spot Manta Rays. 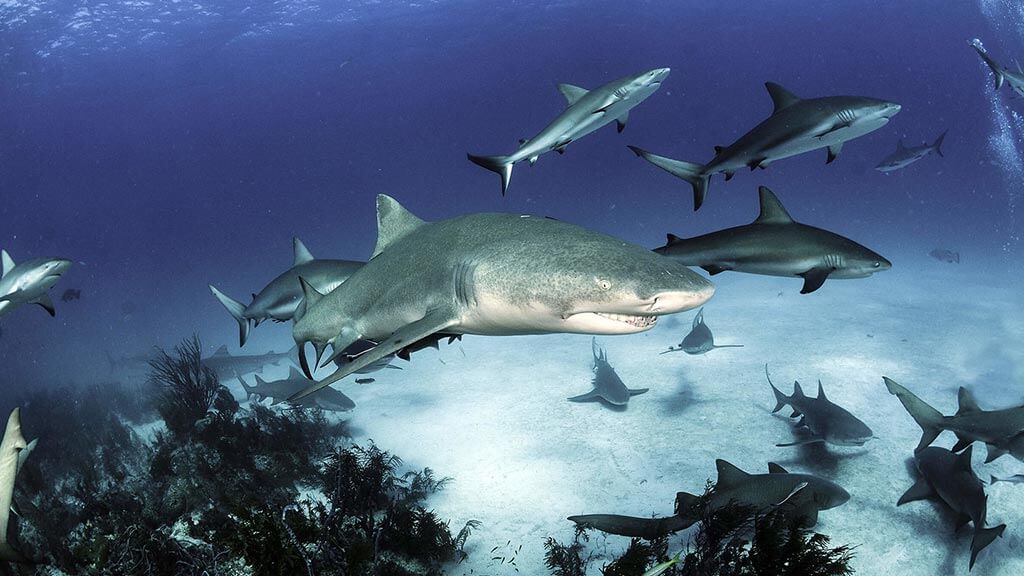 In Conclusion, South Plaza island is a lovely spot to visit, especially during the dry season. The mix of vegetation colors is a wonder to behold. The story of the South Plaza iguanas is fascinating too. See if you can spot all three: land, marine and hybrid. The icing on the cake is for bird lovers to tick off interesting species, and a diversity of underwater action for snorkelers. South Plaza certainly ticks all the boxes.