The beautiful Red-billed Tropicbird amazes Galapagos visitors with it’s spectacular appearance. Their long elegant tail streamers, bright red beak and black eye mask combine beautifully, making the red-billed tropicbird a very photogenic character. Although not always easy to spot at the Galapagos islands, any kean birdwatcher should keep their eyes open during their Galapagos islands cruise. A sighting of the Galapagos red-billed tropicbird in flight is am especially mesmerizing and rewarding experience!

Read on for everything you ever wanted to know about the Galapagos Red-Billed Tropicbird. Where and when to see them? How to recognise them? Plus lots of interesting red-billed tropic bird facts, photos and information. 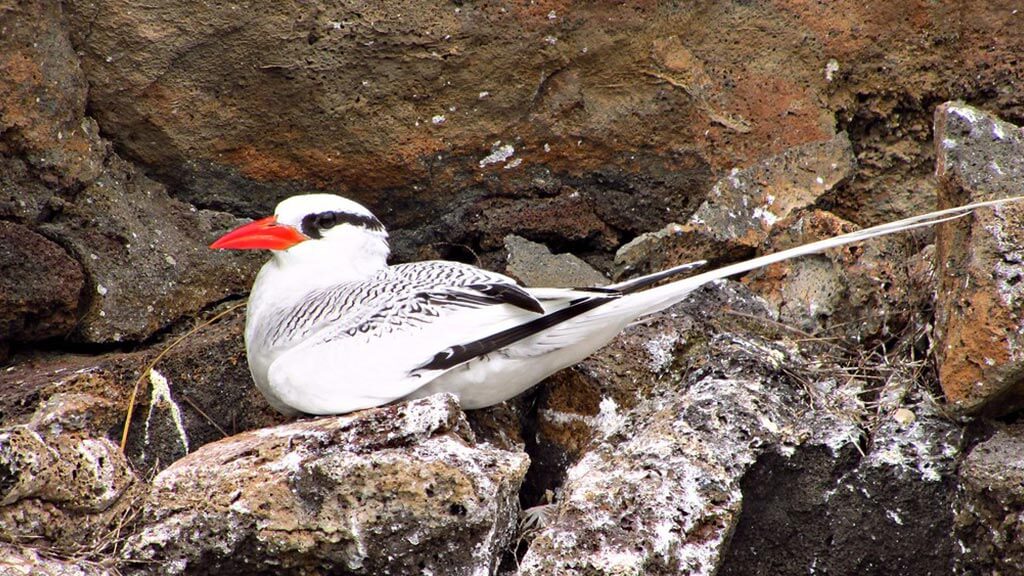 How to See a Red-billed Tropicbird at Galapagos?

There are estimated to be a few thousand Galapagos Red-Billed Tropicbird pairs, spread across 30+ different colonies on different islands. They can be spotted most easily on Galapagos cruising itineraries.

Where to Galapagos red-billed tropic birds?

They are found right across the archipelago, especially in areas with cliffs or rock walls. Some of the best islands to look out for them include South Plaza, Española, Genovesa, North Seymour and Marchena. In truth though they are not one of the easier bird species to spot at the Galapagos islands. They are a pelagic species, spending most of their time out at sea, feeding in open ocean, and only head to land to breed and nest. They tend to nest on inaccessible cliff ledges, so panga rides along coastal cliff areas are the best way to spot them, although it may be at a distance. So visitors need to be in the right place at the right time, and to have a little luck on their side too.

The Galapagos red-billed tropic bird is active all year round, and can breed throughout the year. Marine food at Galapagos is more plentiful during the latter half of the year, so this may be the optimal time to look out for them.

Everything you need to know about Galapagos Red-billed Tropicbirds

How to recognise them?

Fortunately, postive identification of a Galapagos red-billed tropicbird is not difficult. They resemble a tern in appearance, with white bodies, black markings on their wings, a distinctive black mask and bright red beak. But the easiest way to distinguish them from other bird species is by their elegant, long tail streamers which usually measure twice their body length.

The Red-billed Tropicbird is the largest of the world’s Tropicbird species, growing up to 90 - 105 cm long (tailstreamer included), with wingspan a little over 1 meter. Male red billed tropicbirds usually have longer tail streamers than females, while juveniles have yet to grow their impressive tail. 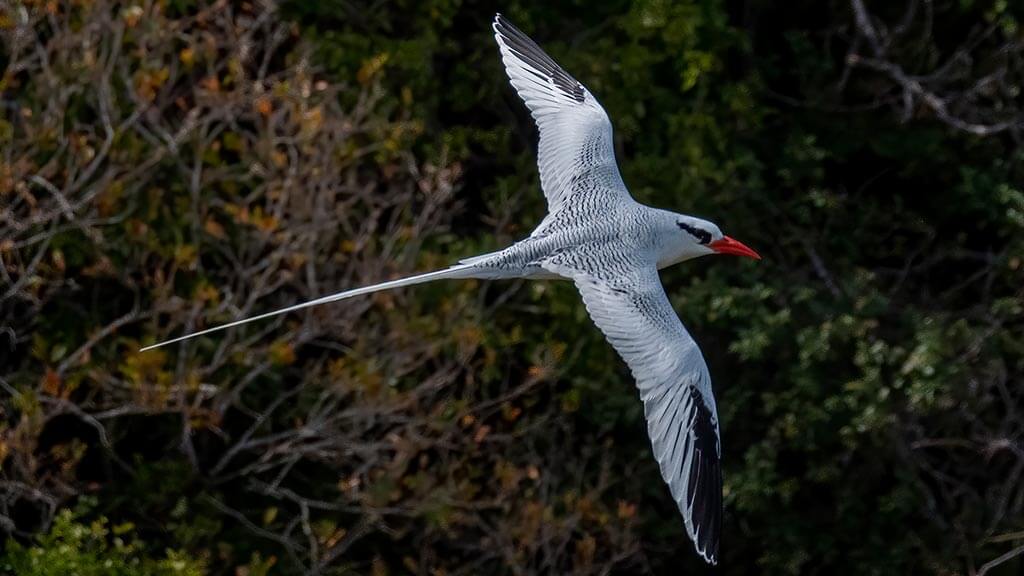 As their name would suggest, Red-Billed Tropicbird range (Phaethon Aethereus Mesonauta) extends across the tropics. They are mostly found along the eastern side of the Pacific Ocean, in the Caribbean, and in tropical areas of the east Atlantic Ocean and Indian Ocean. At the Galapagos Islands they are sturdy seabirds, spending much of their time out to sea, and only coming to land for breeding. Red-billed tropicbirds nest in colonies, preferring rock walls or cliff ledges which offer good shelter and protection from land predators.

The Red-billed Tropicbird courtship ritual is quite beautiful. Couples perform spectacular aerial acrobatics together for up to one month at a time – this can be a particularly spectacular moment for visitors to spot them. At Galapagos they can breed all year-round, laying just one single egg per clutch. The incubation period lasts for 6 weeks, and after fledging the baby tropicbird will typcially fly the nest to fend for itself.

What do Red billed tropicbirds eat?

The Red billed Tropicbird diet consists mostly of squid and small fish which they catch by plunge-diving. This bird often likes to forage for food alone, and has intelligently learnt to follow other predators such as dolphins or tuna, catching small fish that are driven to the surface by them.

Surprisingly though the red-billed tropic bird is a poor swimmer. They will hover above the ocean surface searching for prey, before diving and once more taking to the air. If they do sit in the water they look uncomfortable with their tail streamer pointed upwards to keep it dry. 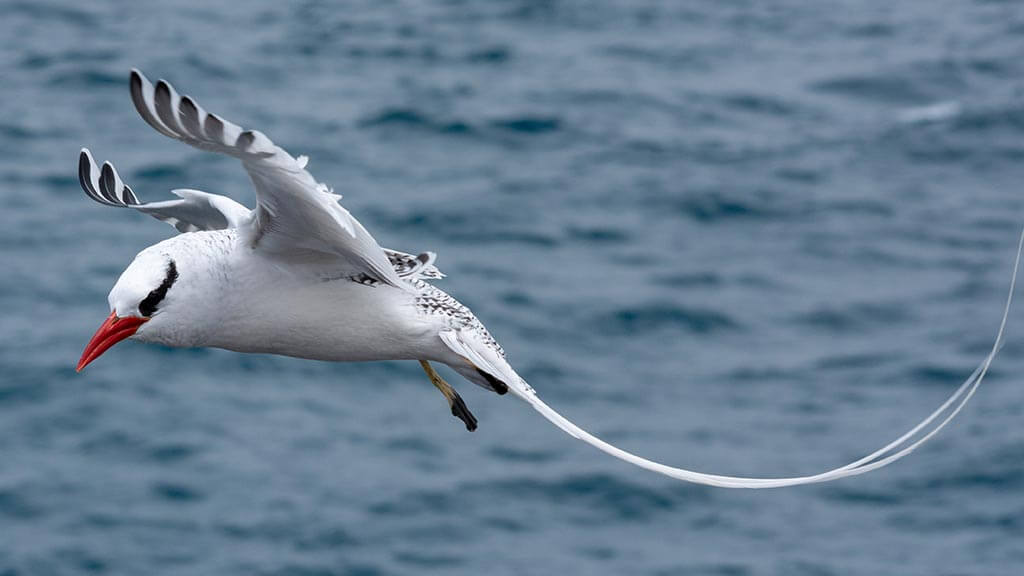 • As graceful as they are in flight, the Red-billed Tropicbird is rather clumsy on land, unable to walk and having to push itself along on it’s belly. For this reason they like to nest on steep cliffs, where walking is largely unnecessary and take-off easy.

• They hate to get their impressive tail streamers wet. It is quite common to see them sitting on the water, with their tail held up in order to keep it dry.

• The Red-billed Tropicbird is nicknamed the Boatswain Bird, due to it’s shrill call that sounds similar to a Boatswain’s whistle (kree-kree-kree).

• Although listed as a species of Least Concern on the IUCN Red List, the Red billed Tropicbird global population trend is in decline. There are thought to be between 16 and 30 thousand mature adults alive today - a considerable percentage of which are found at Galapagos. The fact that they lay just one egg per clutch means that possible population increase is a slow process. Their clumsiness on land can also leave them vulnerable to predation - invasive species such as cats and rats are more than happy to dine on Tropicbird eggs.

In conclusion, few Galapagos birds can claim to be as elegant and graceful as the red-billed tropicbird. Although they are found in large numbers at the Galapagos islands, they are not one of the more commonly sighted birds here. Bird watchers should look along cliff ledges where they nest, or if really lucky you might photograph one in flight over the ocean - a shot that can easily be one of your very best vacation snaps.