The Swallow-tailed gull is one of the most attractive and distinctive looking birds at the Galapagos islands. Not only that, they are also the world’s only nocturnal gull, using highly developed night vision to hunt in the dark. They are a frequent sighting for visitors, and often close-up as these gulls have no fear of humans. The Swallow-tailed gull is a truly unique bird to tick off from your Galapagos bird list.

Read on to learn more about the Galapagos swallow tailed gull. Where and when to see them? Plus lots of other interesting swallow-tailed gull facts and information.

The Swallow-tailed gull is a Galapagos NEAR ENDEMIC BREEDING SPECIES.

How to See a Swallow-tailed Gull at Galapagos?

Where to see swallow tailed gulls?

The Swallow-tailed Gull prefers the warmer waters at the east of Galapagos, but can be spotted in small colonies right across the archipelago. In total there are an estimated 35,000+ individual swallow-tailed gulls at Galapagos, spread across over 50 colonies. The best islands to see them are: Genovesa, Española & South Plaza islands.

Swallow-tailed gulls are active at Galapagos all year round. They have no strictly defined breeding season, so you might spot them nesting or with baby chicks any month of the year. 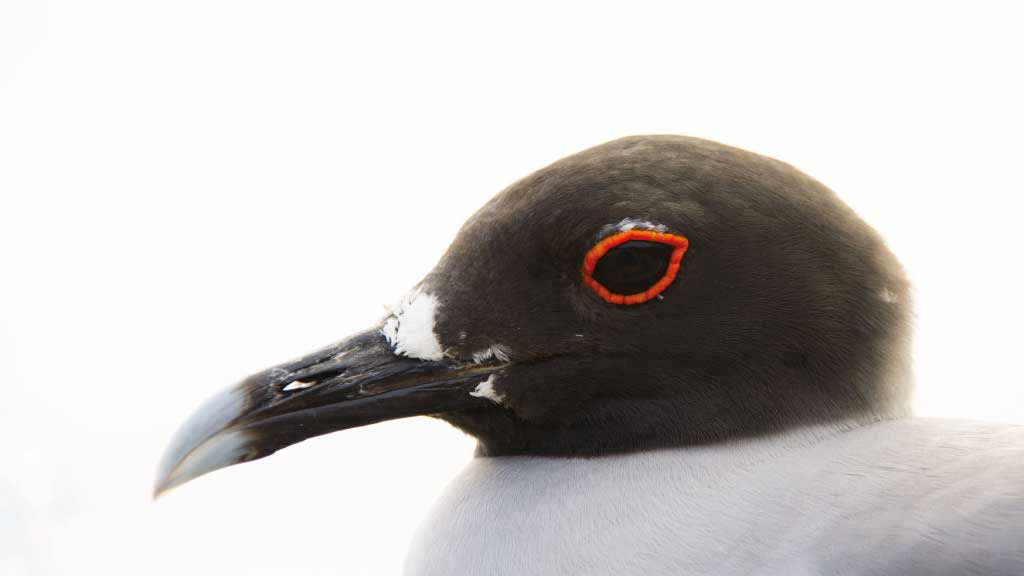 Everything you need to know about the Galapagos Swallow-tailed Gull

How to identify a Swallow-tailed gull?

These are attractive birds with elegant variations of black, white and grey plumage. The defining feature of a swallow-tailed gull is its eye ring, which changes color depending on breeding status. Breeding adults can be recognised by their bright orange/red eye ring, while non-breeding adults have a black eye-ring. Their eyes are also significantly larger than other gull species, which helps them to hunt at night, but can be a disadvantage during the day under a bright tropcial sun.

The swallow tailed gull is a medium to large sized gull (average 51-57cm in height). They boast a distinctive curved black beak with white base and grey point. Breeding adults have a black head, non-breeding a white head. Baby swallow tail gull chicks are cute, fluffy, and white/ grey in color.

Swallow-tailed gulls prefer rocky slopes, lava holes or cliff ledges for nesting. They like to have plenty of personal space between nests, and often prepare their nests withdrawn to the back of ledges for shade and protection from the sun. The male is responsible for nest construction, building from stones, lava fragments, and sea urchin spines. Only once the nest is ready is the male ready to attract a female mate.

The swallow tailed gull range is wide. Whilst they breed and nest only at the Galapagos islands, they spend long periods hunting in open ocean. This can take them as far away as coastal regions of Ecuador, Peru, Chile & Colombia along mainland South America.

Swallow tailed gulls are Asynchronous breeders - that is, they breed year-round with no defined season. So there are always mating pairs to be found, and couples will frequently stay together from year to year. Just one egg is laid per clutch, with parents taking turns to guard the nest during the day. The incubation period lasts typically 31-34 days, before a cute and fluffy chick hatches out. At night, the non-brooding parent flies out to sea to hunt food for the family. This process repeats for up to 3 months until the chick is ready to fly for himself.

What do Swallow-tailed gulls eat?

The swallow tailed gull diet consists mostly of squid and small fish that swim to the surface at night to feed on plankton. Around dusk time Swallow-tailed Gulls head out to sea together as a small flock. Their unique nocturnal vision helps them to locate and catch their prey very effectively.

When swallow tailed gulls are not breeding they can head out for long distances into open ocean in search of rich feeding grounds. Remarkably there are accounts of sightings as far away as the coasts of Southern Peru / Northern Chile on mainland South America. The reasons are clear as squid are more numerous further south of Galapagos, where the cold and nutirent rich Humboldt current dominates. 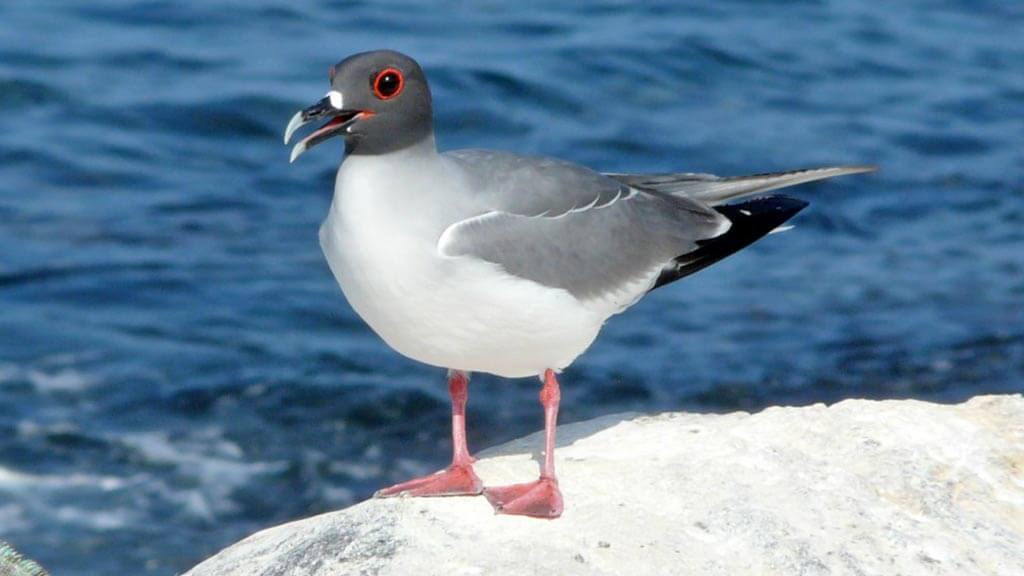 • Swallow-tailed gulls have developed excellent night vision, and are the only gull species on the planet with this ability. One advantage is that they can hunt at night without the risk of Frigate birds stealing their catch. How does a swallow-tailed gull see in the dark? It's all thanks to their large eyes (the largest of all gull species), and a unique tissue layer that reflects light back through the retina.

• They have a handy color-coding technique to identify when an individual is ready to mate. When in season their eye rings will turn a bright orange/red color, while for the rest of the year the eye-ring is black.

• The Swallow tailed gull genus name is Creagrus, deriving from the Latin and Greek terms for butcher and meat. The origin of this name is due to their hooked bill which resembles a meat hook.

• While the Swallow tailed gull is listed as Least Concern on the IUCN Red List, this species does face some threats. Galapagos Hawks will happily make off with unguarded eggs, while plastic pollution and climate change could also impact them in the future. For now their population numbers are estimated to be stable, but like all Galapagos birds and animals their ecosystem needs to be protected to ensure their future survival.

In conclusion, the Swallow-tailed Gull is a lovely bird to cross paths with at the Galapagos islands. Even if bird watching is not your thing, it's hard not to appreciate their handsome appearance. For fun, visitors can quickly learn how to identify the different eye ring coloring to know if an adult can breed or not. These gulls have little fear of humans, so get up close to them for wonderful photography opportunities of this elegant and charming species.