The Lava Gull is the rarest gull species on the planet, making it a real treat for Galapagos bird watchers. Why is the lava gull so rare? Firstly, Lava gulls are endemic to the Galapagos Islands, meaning that this is the only place they can be found on the planet. Secondly, they have very low population numbers and are listed as a vulnerable species. The good news though is that they are a surprisingly common sight for Galapagos visitors, and not hard to find here. Perhaps not the most beautiful bird at the Galapagos islands, but don't be surprised if you see birders become very excited upon spotting a rare lava gull.

Read on to learn more about the unusual Galapagos Lava Gull. How to recognise them? What is their unique behavior? Where and when can visitors spot Lava Gulls at Galapagos? Plus heaps of other fun Lava Gull facts. 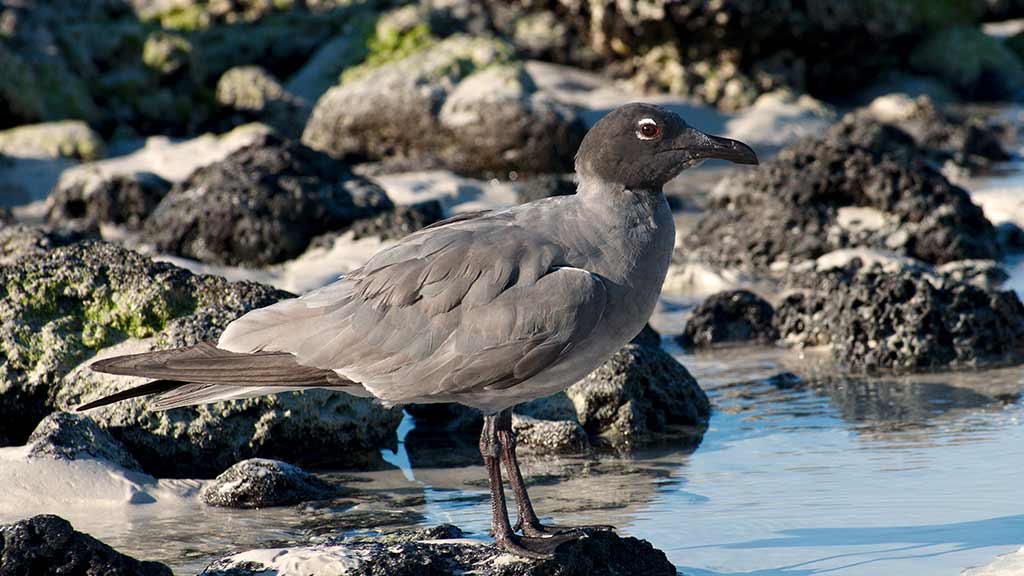 How to See a Lava Gull at Galapagos?

Today at Galapagos there are just 300-400 breeding pairs of lava gull. They are one of two resident gull species, the other being the Swallow tailed Gull. The Lava Gull is also known under the guise of Dusky Gull.

Where to see Lava gulls?

Due to their small population size many visitors expect lava gulls to be hard to find, but fortunately the opposite is true. They hang out on populated islands, often close to human settlements, and they are far from shrinking violets. In fact visitors will often encounter lava gulls around harbours or shipping boats. They are usually perched, keeping an eye on things around them, looking out for an easy meal to scavenge.

The inhabited Galapagos islands are often the best place to spot lava gulls - San Cristobal, Santa Cruz and Isabela. Visitors can also usually cross their path up north at Genovesa - known at Galapagos as the bird island.

The Lava gull is a perennial Galapagos species - they are found at the Galapagos islands right across the year. The can nest in any month of the year, but the most common lava gull nesting season runs from May to October.

Everything You Need To Know About Galapagos Lava Gulls

How to identify a Lava Gull?

Lava gulls are easy to recognise at Galapagos – they are the only gull that is completely dark in color. In fact their name originates from their dark plumage colorings that blend in so effectively against the black lava background. 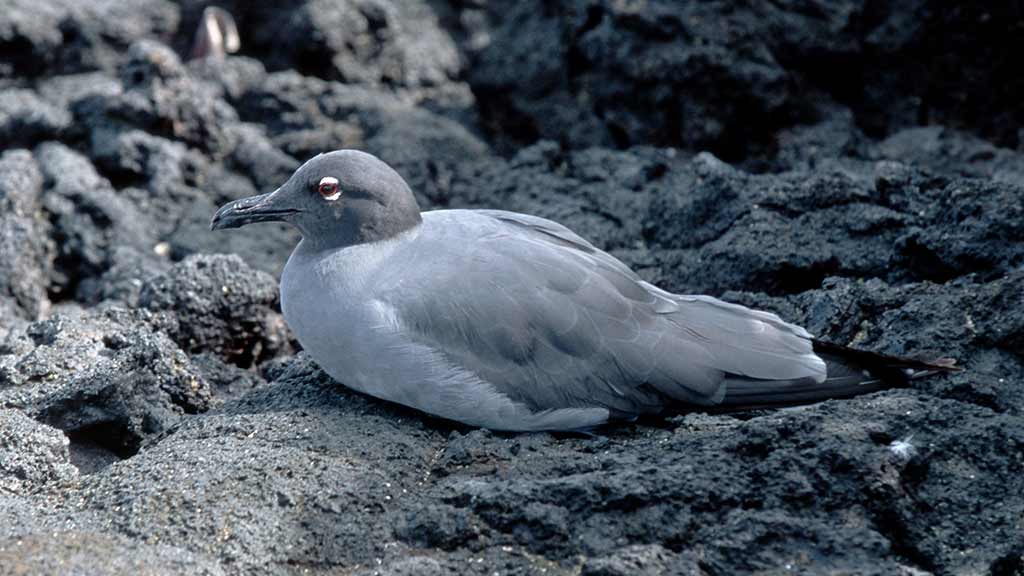 They are a species of hooded gull. Adults (male and female) have sooty brown/black head colors, and dark grey feathers with the exception of a distinctive white line on the leading edge of their wings, light grey bellies and darker tail feathers. Even their feet are dark grey in color, completing their impressive camouflage against the black lava rocks at Galapagos. Their final distinctive feature are white eyelids which stand out against the darker coloring of their head. Adolescent lava gulls are also easy to identify as darker brown in color until they mature after 3 years.

In terms of size they are a medium to large member of the gull family, growing up to 55cm tall with wingspan of 130cm. Lava gulls have a life expectancy of 49 years.

Lava gulls frequent coastal areas, nesting on the ground in sheltered nooks and crannies close to the sea. They are often spotted scavenging for food along beaches or lava outcrops, or close to human activity around boats at harbours.

Lava gulls attract their mate by performing displays of head-bobbing while making sounds rather like human laughter.

While most gull species nest close together in colonies, lava gulls prefer to have their own space. Each nest is usually more than 100meters away from the next, and lava gull couples are fiercely territorial and protective. Galapagos lava gull nests are simple affairs, nothing more than a scrape in the ground without decorative touches.

Lava gulls lay two olive colored eggs in each clutch. This is certainly an unusual egg coloring in the bird world, but provides excellent camouflage on sand and gravel. Both parents share incubation duties for between 30-33 days. Lava gull chicks fledge after 2 months, but still depend on their parents for food for a further 3 weeks until they are able to fend for themselves. 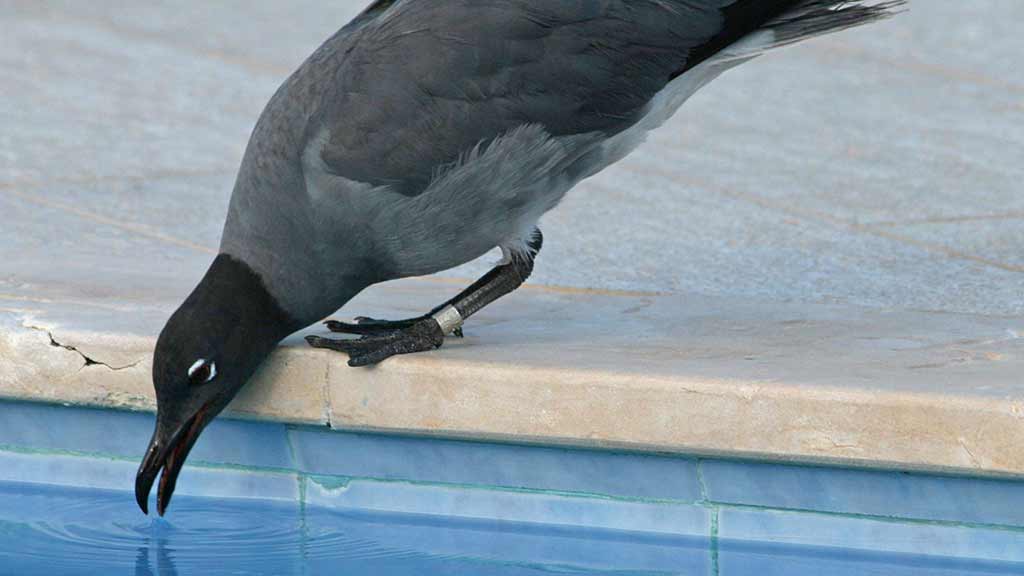 What do Lava Gulls eat?

A better question would be what don’t lava gulls eat? They scavenge pretty much anything edible that crosses their path. They are omnivores who prefer a diet of fish, crustaceans, baby lava lizards, marine iguanas or sea turtles, sea lion placenta or human waste.

Lava gulls are listed as a vulnerable species by the IUCN red list They nest on the ground and often close to human settlements, leaving them defenceless against introduced species like feral cats, dogs and rats. Natural predators such as Short-eared owls and Galapagos Hawks will also happy dine on young gulls or eggs.

While there is no active Galapagos Conservation work underway to specifically protect the Lava gull, they do benefit from general campaigns to control introduced species and limit plastic pollution.

If you enjoyed this post, then check out more information about other Galapagos Bird species.

In conclusion, the Galapagos Lava Gull may not be the most beautiful bird in the world, but it does boast a unique claim to fame as the rarest gull in the world. That alone makes them a worthy tick on any birders bucketlist, and a noteworthy species for visitors to look out for. They are far from shy creatures so tourists are likely to cross paths with them during most Galapagos itineraries. Quite likely they will surprise you with their audacity as they pinch the catch from local fishermen, and tameness around tourists.