The Galapagos Whale Shark is one of the bucket list highlights for divers at the Galapagos islands! Not only that, Galapagos is arguably the very best place in the world to dive with these magnificent giants of the deep. So if you always dreamt of diving with whale sharks, now you know exactly where to come! Whale sharks are the largest species of shark on the planet, they are beautiful creatures, and also very peaceful. But above all they are huge! Here you'll find adult Galapagos whale sharks larger than buses!

Keep reading for everything you need to know about the Galapagos whale shark. Where, when and how to see them? Why are whale sharks endangered, and what is being done to save them? Plus lots more interesting whale shark facts & information. 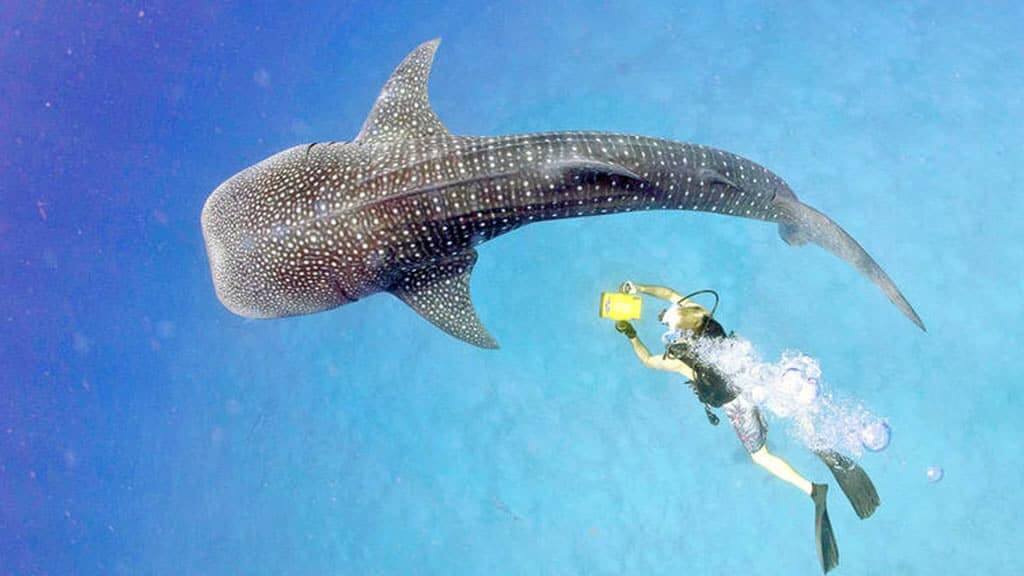 How to see whale sharks at Galapagos?

Whale sharks inhabitat all warm and temperate seas on the planet, yet are an elusive species to find. The Galapagos islands are an important stopping off point on the migratory path of whale sharks, making this one of the most reliable places on the planet for whale shark observation. Come during Galapagos whale shark season for the highest probability of seeing these gentle giants.

Where to see Galapagos whale sharks?

Whale sharks congregate in the far north-west of the archipelago at Darwin and Wolf Islands. The waters around Darwin’s Arch are a particularly popular whale shark feeding ground, where naturally upwelling currents attract plankton.

When can you see whale sharks in the Galapagos?

The principal Galapagos whale shark season is from June to November, with peak viewing usually during August and September. During this time the cold Humboldt current flows into Galapagos waters from the south, cooling the ocean and bringing rich nutrients that are perfect for all marine species. Although many whale shark individuals spend no more than 1 day here before moving on, some do choose to stay for a longer period of feeding. Remember whale shark behavior is highly variable so sightings are also possible at other times of the year.

To see Galapagos Whale Sharks you'll need to take a specialist live-aboard Galapagos cruise - that is the only way to reach the islands of Darwin and Wolf. Dive yachts that cruise this route include the Humbolt Explorer, Aqua Yacht, Aggressor III, Galapagos Sky, Tiburon Explorer and the Calipso. All of these yachts are equipped with the latest in dive equipment, and you'll have naturalist dive guides along with you to bring the experience to life.

For Galapagos divers, whale sharks are found in open water commonly in the area around Darwin’s Arch which seems to serve as a route marker on their migratory path. Galapagos is recognised as one of the few spots on the planet where you can consistently dive with Whale Sharks, and perhaps the only place to dive with large adult specimens of 10-12 metres in length. Not only that, at Galapagos you’ll also find large schools of Scalloped Hammerheads and many other amazing dive treats on a Galapagos Dive Cruise.

Is it dangerous to swim with whale sharks? Not at all, despite their intimidating size these are extremely gentle creatures of the deep. Whale sharks have bever before harmed a human, so you are very safe in the water with them.

Contact us for a FREE GALAPAGOS TOUR QUOTE , or for help organising a Galapagos Dive Vacation to swim with huge Galapagos whale sharks. 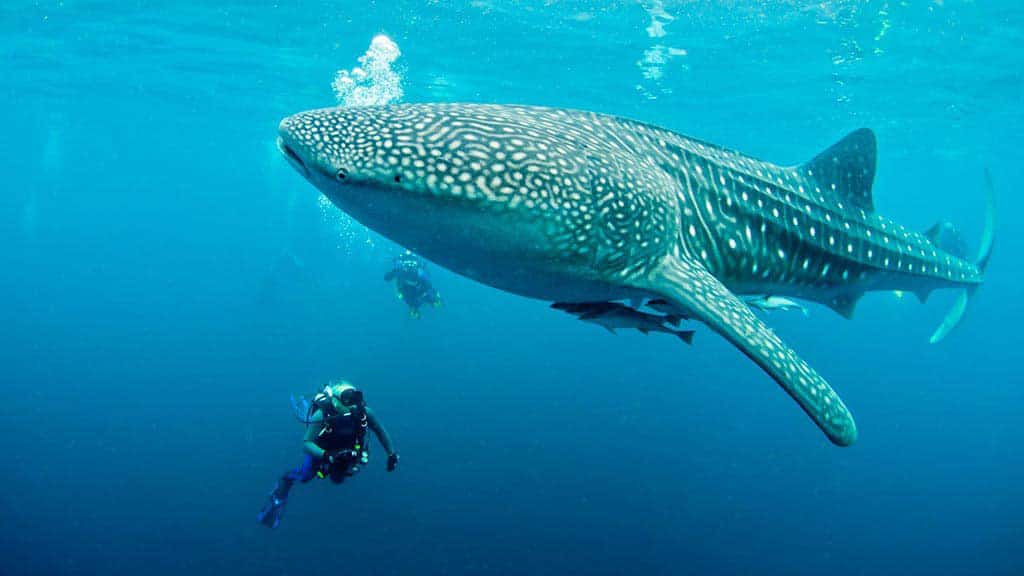 Everything you need to know about Galapagos whale sharks

How to recognise a whale shark?

Whale Sharks are not difficult to identify. For starters, they look like a really huge shark – measuring up to 20 meters long, and weighing as much as 30 metric tons. The other tell-tale sign is their distinctive markings. White spots in between vertical and horizontal white stripes creates a very attractive skin pattern, unique to each individual like a human finger print. A whale shark's head is broad and flat, with a very wide mouth up to 1.5 metres wide, and relatively small eyes just behind the mouth.

What is the origin of the strange name ‘Whale Shark’? Are they a whale, or are they a shark? Scientifically speaking they are classified as a shark species, but they do grow to sizes as large as a whale and eat plankton by filter-feeding similar to many whale species. So their name is rather fitting after all.

In truth whale sharks are mysterious and enigmatic creatures, and little is known about their behavior and habits. At Galapagos, one of the great whale shark mysteries is why are 90% of the whale sharks found here pregnant females? Also why do most individuals visit just one specific site, Darwin Arch, and for such a short period of time? We don’t have all of the answers yet, but scientists are actively studying these fascinating creatures.

Very little is known about global whale shark breeding behavior, but the study of one female back in July 1996 did reveal some of their secrets. She was pregnant at the time with 300 pups in her belly, indicating that they are ovoviviparous – meaning that eggs hatch inside the female body before she gives birth. Baby whale shark pups measure from 40 – 60 cm when born, and grow very quickly – approximately 18 inches per year. They can live for up to 130 years, which explains in part how they become so large.

What do Galapagos whale sharks eat?

The principal whale shark diet consists of plankton, small fish, krill and fish eggs, eating up to 90 pounds each day. Galapagos whale sharks are filter feeders, sucking tons of water into their large mouths by swimming close to the surface with mouth wide open. This practice is known as ram-filter feeding. They filter through 350 rows of tiny teeth, and out again through their gills. If you are lucky enough to observe whale shark feeding at Galapagos then you are in for a real treat.

• A Whale Shark travels many thousands of miles each year, on routes that take them between feeding grounds off of the western coast of Australia, Indonesia, and Belize. The Galapagos Islands seem to be an important stopping off point for them during their migration, although it is not fully understood why.

• Over 90% of the whale sharks that visit the islands are pregnant females, again little is understood about this unusual behavior. Most other feeding grounds around the world are male-dominated. Ongoing studies by Marine Biologists aim to better understand Whale Shark behavior and movements.

• Despite their impressive size, the whale shark is actually a suprisingly inefficient swimmer. Their average swim speed is just over 3 miles per hour, and they need to use their entire body in the act of swimming – something that is very unusual for fish species.

• Like other shark species the whale shark makes use of a sixth sense. Specialized nerve cells in their head are sensitive to electromagnetic fields transmitted by other marine creatures. 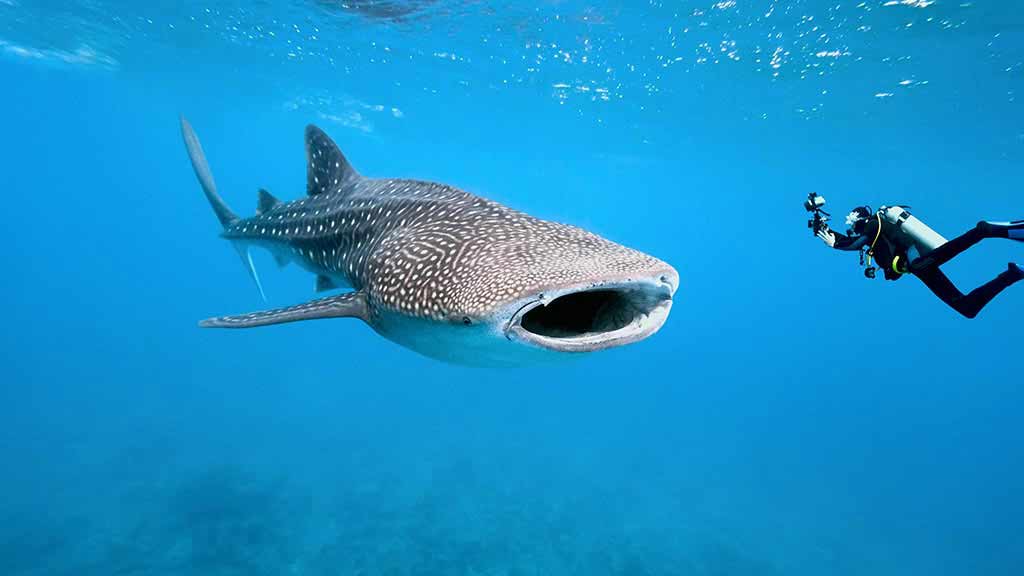 The Galapagos Whale Shark Project is an ongoing collaboration between the Galapagos National Park Service, the Turtle Island Restoration Network, Naturalist Jonathan R. Green, and the Charles Darwin Foundation. Their aim is to improve understanding of Whale Shark mirgratory movements, behaviors and habits in order to better protect this endangered species.

The project team have been able to identifiy individual Whale Sharks by their unique fingerprint of spot markings, and other physical characteristics that make them stand out. They then track these individuals using satellite tags, and take blood samples. Photo identification is also used to create a database that helps determine where and when each individual is spotted around in the world. Divers are actively encouraged to send their photos in to support the work, so if you take clear snaps at Galapagos then do send them in to support the project.

To date, no one has ever seen a whale shark being born. Most juveniles are spotted in open waters when already 4 years old, making their stomping grounds in their early years a mystery as well as their birthing sites. Where are Whale Shark nurseries to be found? Does the Galapagos Islands hold a key role in the birth of baby Whale Shark pups? Results and findings are published on their site, hopefully soon we will understand far more about these stunningly beautiful and gentle giants.

The final goal of the project will be to identify the key migratory routes and nurseries of whale sharks. If we know where and when pregnant whale sharks give birth, and the oceanic regions where pups congregate in their early years, then effective conservation projects can form to better protect them. For now, Galapagos whale sharks have a safe haven within the boundaries of the Galapagos marine reserve, but are often in danger when they leave. In 2020 a large chinese fishing fleet parked themselves on the border of the marine reserve to fish for squid. This practise has long been criticised by international press and polititians. Galapagos shark species including hammerheads and whale sharks have previously been found aboard such vessels, valued for the high price of their fins on the black market.

If you enjoyed this post then check out our blogs about other Galapagos marine species. Whale sharks aren’t the only marine life found here in great numbers – the waters off of Galapagos in fact boast the largest shark biomass in the world. Other species that you can find include: Hammerhead Shark, Whitetip Reef Shark, Blacktip Reef Shark and the Galapagos Shark.

In conclusion, the Galapagos whale shark is one of the most breathtakingly beautiful creatures in the ocean. The fact that so little is known about them just adds to their awe and mystery. The Galapagos oceans are one of the best places on the planet to dive with large adult whale sharks - one of the holy grails for passionate divers. So if you do want to add diving with whale sharks to your bucket list then Galapagos is the place to come!