Galapagos in April: Is it a Good Month for Weather and Wildlife?

Galapagos in April: Weather, Wildlife and What to Expect

Is April a Good Month to Visit the Islands?

One of the most common questions we get asked: when is the best month to travel to Galapagos? Is our vacation to Galapagos in April a good idea, or should we go in March or May? Is it too hot / cold / rainy in April? Are the April seas warm enough for swimming? Our answer is always the same – April is a great month at Galapagos, and so too are all the other months! The Galapagos Islands are an all year round travel destination, with comfortable weather and great wildlife viewing every month of the year. So yes, April is as good a month as any to visit Galapagos.

Read on for everything you need to know about Galapagos in APRIL – weather, temperatures, rainfall as well as wildlife to spot.

What to expect at galapagos in April?

April is in the middle of the WARM & WET Galapagos season, so expect plenty of tropical sun, with occasional heavy showers or drizzle (especially in the highlands), and some humidity. Sunblock, a hat, and sunglasses are a must at all time, even on cloudy days, to ensure that you go home with a nice tan rather than sun burn. A light rain jacket might come in handy too in case you are caught in a shower.

In WARM & WET months like April, the rains and sunshine have transformed the highlands into a lush and green Paradise. April is therefore perfect for land species such as the Giant Tortoise, Land Iguanas, Darwin Finches & other land birds, who find food plentiful.

Don’t worry, the Galapagos marine species are also easily spotted in April, even though the warmer seas mean fewer nutrients for them to feed on. Some species like Hammerhead sharks and Manta Rays actually prefer the warmer seas this time of year to visit Galapagos waters.

April sees REGULAR demand for Galapagos cruises throughout the month. The one exception is Easter week (if it falls within April) when demand from local Ecuadorians is very high and Galapagos flight spaces are often full. April is also a good month for Galapagos Land Tours. In general there are often good last minute deals to be found in the month of April if you are flexible in your travel plans.

April at Galapagos is a month of contrasts - one one hand it is the warmest month, but on the other it is one of the rainier month too. Air temperature averages 31 degrees celcius, and 1.5 inches of rain typically fall thoughout the month. During the day you'll be comfortable in shorts and Tshirt, but it’s a good idea to take a light raincoat on excursions too, just in case of April showers. 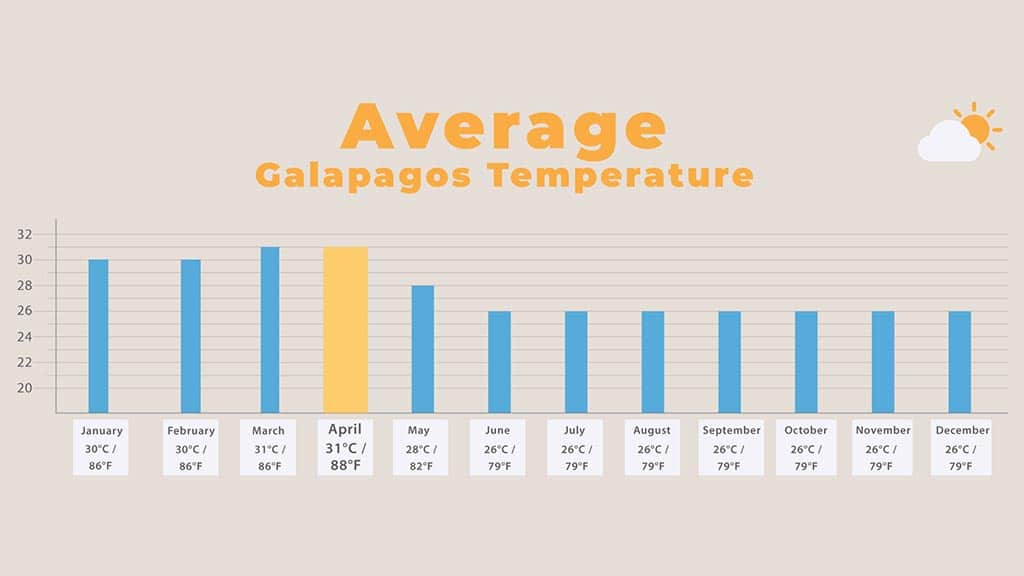 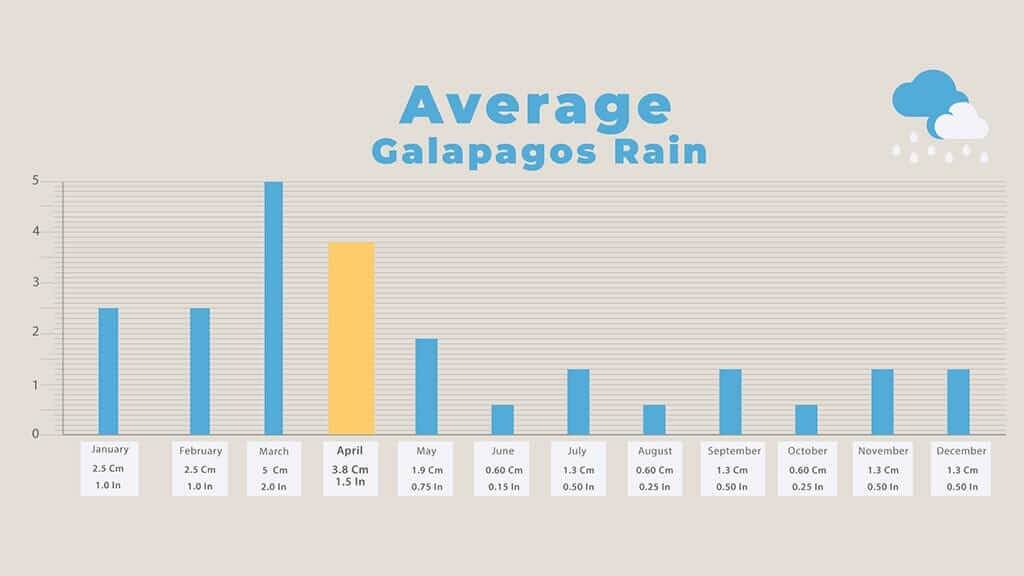 Water Temperature at Galapagos in April 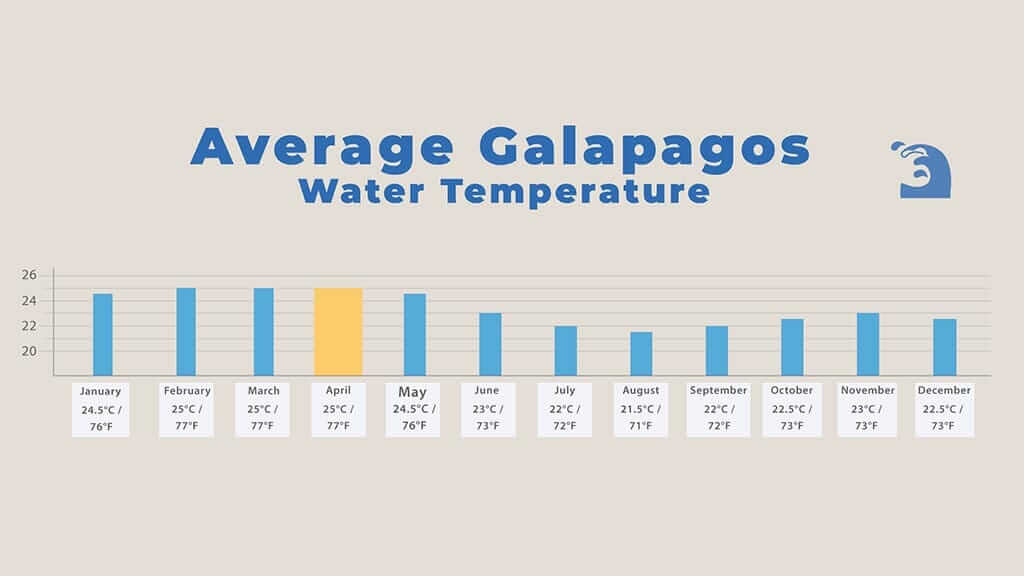 Which animals can I see at Galapagos in April?

Is April in Galapagos a good month for wildlife? Remember, every month at the Galapagos Islands (including April) is amazing for wildlife spotting, and almost all land and marine species can in fact be found all year-round.

Our favorite April highlight is the entertaining courtship dance and rituals of the blue footed boobies. Keep your video camera handy as this is one of the most impressive Galapagos shows of the year. Booby males need to show off those amazing blue feet to impress a potential mate - but are his feet blue enough? The blue coloring of booby feet comes from carotenoid pigments from their favorite food of sardines, so males who are good hunters will catch more sardines and have the most impresssive feet. But how is one to demonstrate that to a picky female booby bird? Easy - perform the famous booby mating dance strut, lifting those blue feet into the air, while pointing your beak to the sky and whisteling to attract attention. If the female likes what she sees then she'll join in the dance too.

A very different courtship is taking place on Espanola island in April. The beautiful waved albatross have recently returned to Galapagos - their only nesting site in the world. Albatross mate for life so they have no need to attract a mate - courtship is more about reconnecting after months out to sea. Albatross couples tenderly clack their beaks together and circle one another in a more romantic ritual than the blue footed boobies. They are also preparing their nests ready to lay their clutch of eggs.

If you plan to visit the town of Puerto Villamil on the south-east coast of Isabela island then look out for Galapagos penguins - April is one of the best months to see them here. They are usually spotted out on the black lava rocks outside the harbor, or sometimes swimming like bullets in the clear water under the dock boardwalk. Lucky visitors might also have the opportunity to snorkel with penguins here!

Some Galapagos species are already further down the road in their breeding cycle. Green sea turtle eggs are hatching on beaches such as Bachas (Santa Cruz) and Cormorant Point (Floreana). It is not an easy battle for survival as predators wait for them on land and at sea - only around 1% of these cute baby turtles are likely to make it to adulthood. Look out for Frigate birds and Galapagos Hawks circling overhead on the lookout for an easy meal. Elsewhere land iguana eggs are also hatching across the arcipelago.

Divers should catch a liveaboard scuba cruise up to Darwins Arch by Wolf and Darwin islands - April is often a good month to observe large schools of Scalloped Hammerhead sharks. This areaa has the largest shark biomass on the planet, so is not to be missed!

Check out the infographic below for some of the special wildlife highlights to expect at Galapagos in April. 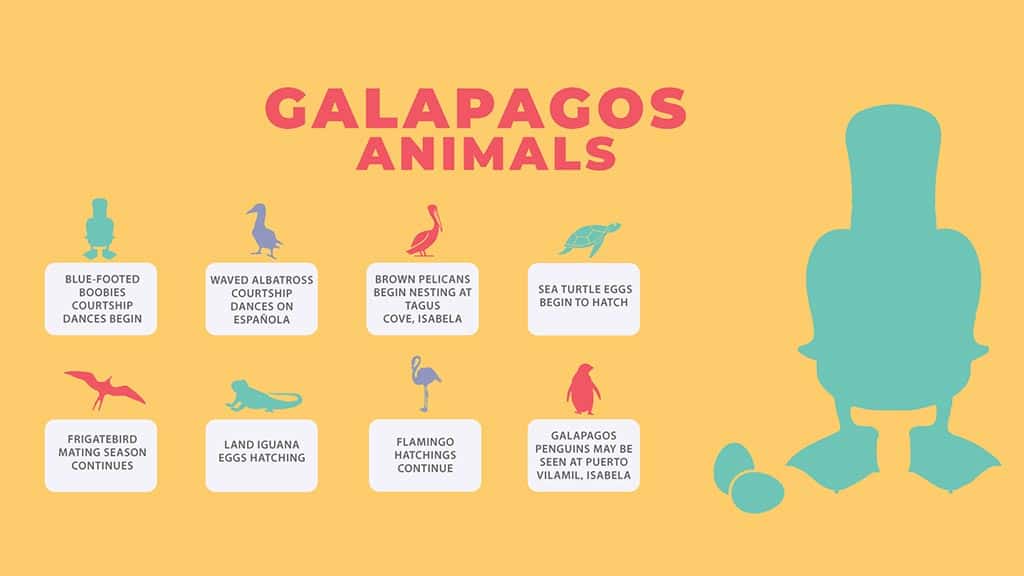 We really hope that this April in Galapagos blog was useful. If you are looking for a complete summary of Galapagos climate across the year, then also check out our general Galapagos Weather blog.

If you need any help planning your Galapagos Vacation (in April or any other month!), then just drop us a line.

In conclusion, April is one of the best months for a Galapagos vacation. The weather is warm and sunny and the sea temperatures are comfortable. April is an off-season month so there are usually lots of tour options available and at good rates. Plus there are some truly exceptional wildlife moments to enjoy.