Read on to learn more about the Flightless Cormorant story. How to recognise one? What is their unique behavior? Where and when can you see cormorants at Galapagos? Plus heaps of other fun cormorant facts. 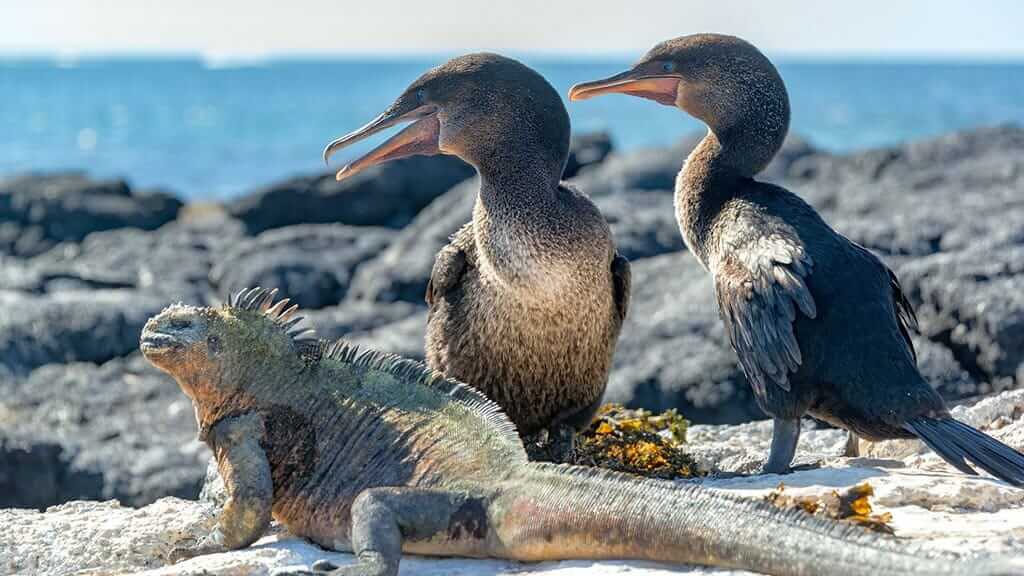 How To See A Flightless Cormorant?

Today at Galapagos there are aproximately 1,000 breeding Cormorant pairs. They all live and nest on 2 specific islands to the west of the archipelago. So, to see them, Galapagos visitors need to take a cruise, and to plan the itinerary accordingly to visit the correct islands.

Where To See A Galapagos Flightless Cormorant?

In order to spot a Galapagos Cormorant, visitors need to head around to Fernandina island, and the western coast of Isabela. The only way to do this is aboard a live-aboard Galapagos Cruise, and not all cruise itineraries include these visits, so be sure to check.

It's no accident that Galapagos flightless cormorants choose to hang out at this spot. The waters here are among the coldest at Galapagos. This makes them very nutrient rich thanks to the Humboldt current arriving from Antartic waters, and makes for the perfect cormorant feeding grounds. Incidentally, the largest Galapagos penguin colonies are found here too, for the same reason.

When to see Cormorants at Galapagos?

Flightless cormorants live year round at the Galapagos islands, so visitors can enjoy seeing them anytime. Their nesting season lasts from May to October. During these months the Humboldt current arrives from Antartica. This is a cold water current, bringing rich nutrients to Galapagos waters. So, the Flightless Cormorant takes advantage of the abundant food to produce offspring. This gives their chicks the best possible chance of survival.

Contact us for a FREE GALAPAGOS TOUR QUOTE with no obligations, or for more information about how to plan your vacation at the Galapagos Islands. 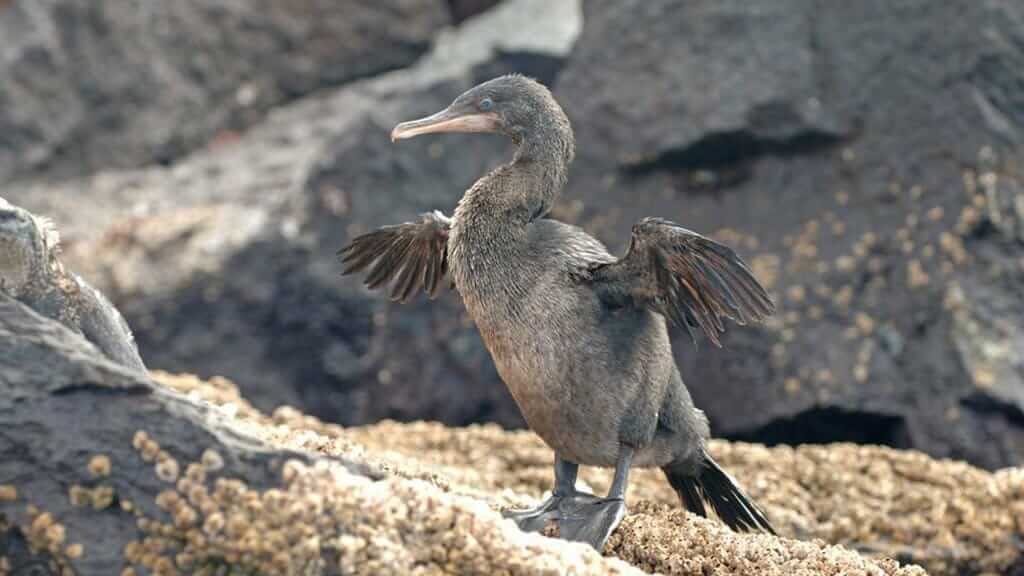 Everything You Need To Know About Flightless Cormorants

The distinguishing feature of a Flightless Cormorant is the wings. They are much shorter than they should be, and appear stunted. Most visitors are surprised at first sight, it is certainly unusual to see a bird with such tiny wings. Their eyes are a striking turquoise color. Adult cormorants have black plumage on top, and dark brown underneath. Male are typically 35% larger than females. Adolescent flightless cormorants can be recognised by their darker colored eyes.

How did the flightless cormorant get to Galapagos? Remember, the islands are 1000km away from the South American mainland. The flightless cormorant we see today is unable to fly any distance. So how could they originally arrive to Galapagos? Curiously their ancestors were in fact perfectly good flyers. So, they originally flew to the Galapagos Islands from the mainland. This was even before Isabela and Fernandina islands existed. They must therefore have settled on older islands first. Eventually they migrated west in search of richer food sources.

So at some point in history the cormorant finds itself living on Fernandina and Isabela islands. They were no land predators to threaten them, so flight became unnecessary. Their food sources were in the ocean, often in quite deep waters. So the cormorant adapted to catch food by diving. The result is an unusual bird with powerful hind legs but tiny wings. A highly skilled swimmer and diver, but unable to fly.

The prefered cormorant diet consist of eel and octopus. They hunt by deep diving to the ocean floor using their powerful hind legs. They can reach into rocky crevasses with their long necks to spear their prey. Regular dives go as deep as 10-15 metres, but they have been known to dive up to 5 or 6 times deeper in search of tasty morsels. 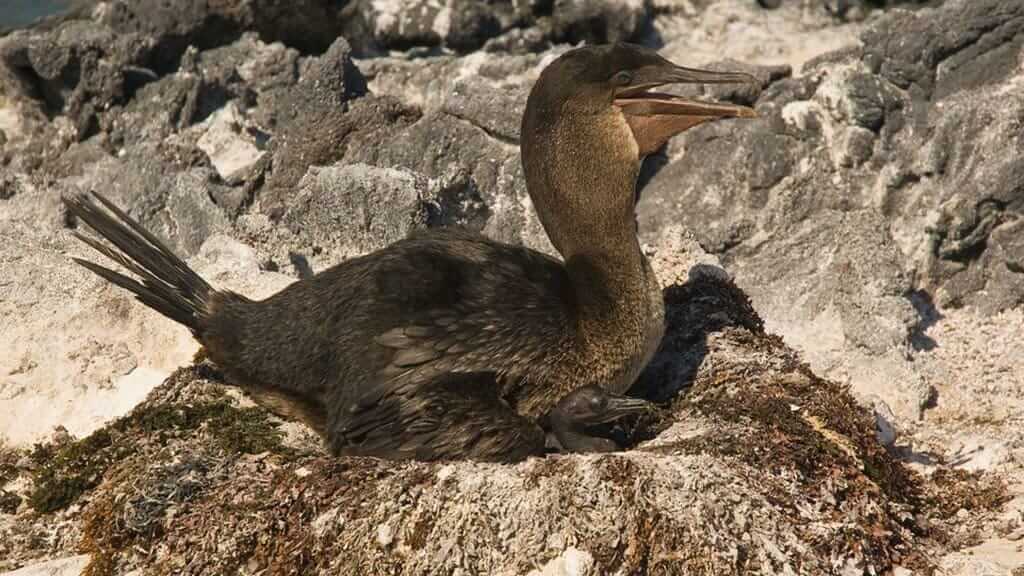 They choose to nest on flat lava rocks. Not surprisingly they hang out close to shore with easy access to the sea. At Galapagos they nest close to areas with the coldest water currents.

Flightless Cormorant couples perform an interesting courtship ritual. They begin in the water by intertwining their necks, and swimming around one another in a tight circle. Once the flirting is over they take to land. It's time to build a home together. Flightless Cormorant nests are made of seaweed and other ocean debris. The male will often present gifts (stones, tiwgs or washed up waste) to the female, to make the nest more homely.

An average of 3 eggs is laid per clutch. The proud parents take turns incubating the eggs for 35 days. Similarly they share the responsibility of protecting, feeding and raising their chicks. Hatchlings need to be cared for over 70 days before they can fend for themselves.

An interesting quirk also sometimes occurs. If seafood is abundant while raising the chicks, then the female may leave the dirty work to the male. Worse still, she pairs up with another male to produce another family.

Flightless Cormorants have few natural predators. Their main natural threats are Galapagos snakes and birds of prey on land, and sharks in the sea. But it's not only natural predators that they need to look out for. Invasive species introduced by humans also pose a threat, principally cats and rats.

Another major threat to the Galapagos Flightless Cormorant is the El Niño weather phenomenon. El niño occurs every decade or so, affecting the whole coast of South America. It causes a small rise in sea temperatures, which in turn reduces the important nutrients found in the ocean. Fewer algae, plankton and nutrients means fewer fish, which also means hungry cormorants. The last major El Niño event ocurred back in 1982/3 and wiped out around half of the Galapagos cormorant population. Not only were adults starving to death, but they were also unable to breed that year. Fortunately cormorants are fast breeders, but even so a severe El Niño causes devastation.

The Galapagos Conservation Trust & Charles Darwin Foundation perform ongoing surveys of Flightless Cormorants to monitor population size. In September 2020 they were delighted to report record numbers of Galapagos penguins nesting at Isabela and Fernandina. The recent La Niña event was believed to have helped, as temporarily cold ocean currents brought more food for marine species. Perhaps also the pause in tourist numbers during the pandemic was also beneficial. 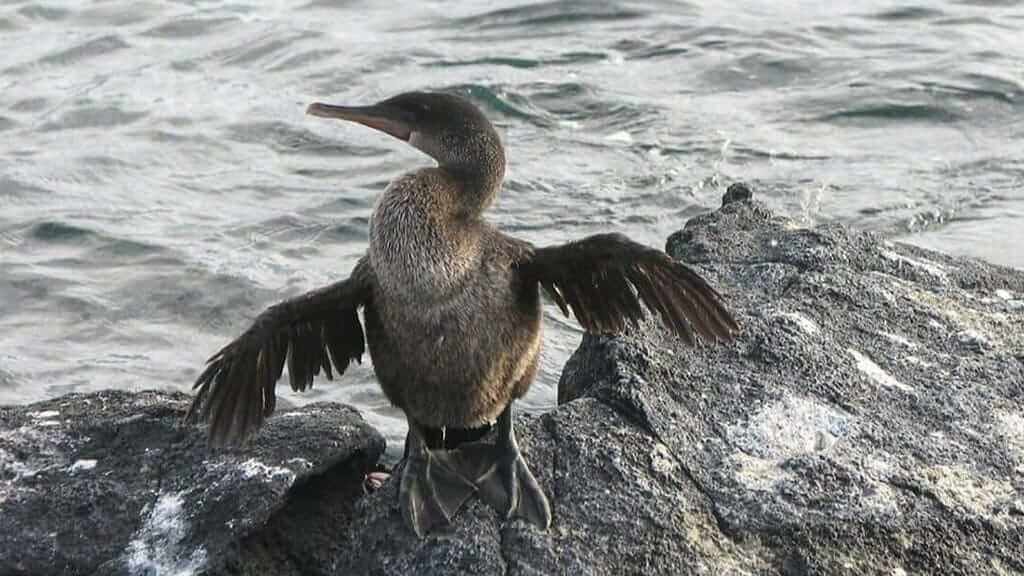 • In order to regain their ability to fly, the Flightless Cormorant would need wings at least two thirds larger than the ones they currently have.

• The wings of a Flightless Cormorant are surprisingly not waterproof. As a result it is common to observe this bird spreading it’s wings in the sun to dry them out after diving.

In conclusion, few birds in the world boast a story as interesting as the Flightless Cormorant at Galapagos. They are one of the best examples today of species evolution. The evidence is clearly visible in their puny wings. But don't feel too sorry for them. What they have lost in flight, they gain in the water. By transforming themselves into strong divers they enjoy plentiful food, and have learnt to thrive here.