How To Visit The Galapagos Charles Darwin Research Station

A visit to the Charles Darwin Research Station is an opportunity to learn about Galapagos conservation in action. Over 200 scientists and volunteers are involved with research and conservation efforts here. Their work is vitally important to protect the pristine Galapagos national park habitat. Today the principal attraction for visitors to the Charles Darwin Research Station are the baby tortoises that they raise in captivity. You can also see giant tortoises & land iguanas, as well as checking out interesting exhibits.

Read on for everything you need to know to plan your visit to the Charles Darwin Research Station at Galapagos. How to get there? What wildlife can you see? Plus lots more information about the tortoise breeding program, and other wonderful conservation projects.

How to Visit the Charles Darwin Research Station

The Charles Darwin Research Station (CDRS) is a biological research station operated by the Charles Darwin Foundation. This educational visitor site is often included into Galapagos cruise or island hopping itineraries, and is also easy to visit by yourself. 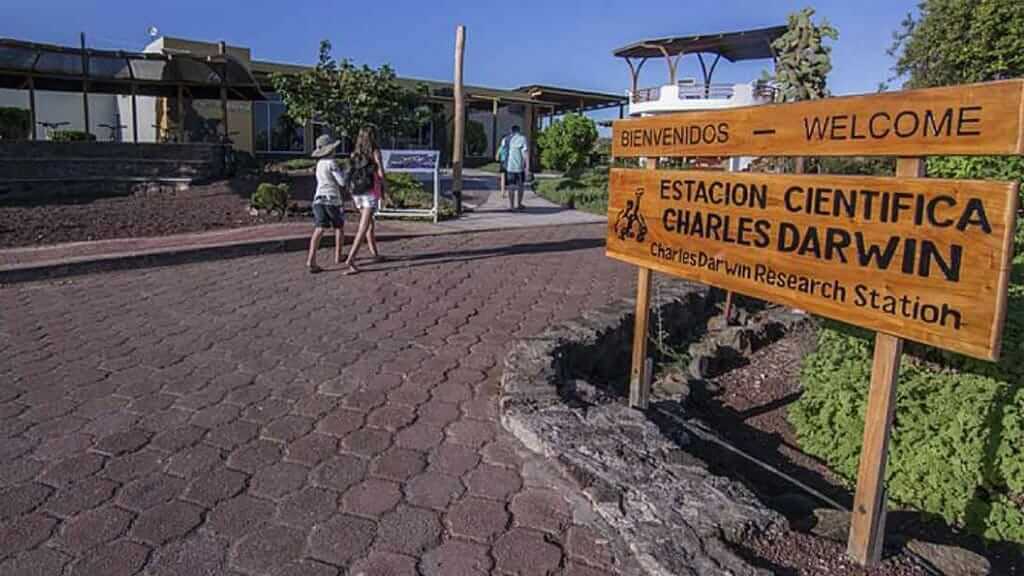 What can visitors see at the CDRS?

The main attraction at the Charles Darwin station is the Fausto Llerena Breeding Center. Here the stars of the show are the giant tortoises, reared in captivity until they reach an age where they can be introduced into the wild. Adult tortoises from various subspecies roam in large corrals. Try to notice the difference in shell-shape and neck length between the species. The dome-shaped shell tortoises are from islands with abudant ground food. While the saddle back tortoise species are shaped to allow greater neck extension to reach higher food sources.

There’s also a baby-tortoise house with special incubators. Baby Galapagos tortoises are adorably cute, and here they enjoy a happy start to their lives, protected from predators. When the tortoises weigh about 1.5kg or are about four years old, they’re repatriated to their home islands. This breeding program is highly respected in the scientific world as one of the most successful conservation programs on the planet. To date more than 7,000 tortoises have been released and are now living in the wild.

Other wildlife attractions include a small enclosure containing several land iguanas, and trails through the typical arid vegetation zone. Plants such as saltbush, mangrove and prickly pear cactus (Opuntia) grow here, and attract a variety of land birds including the famous Darwin finches.

There are also educational exhibits about Galapagos conservation and the birds and animals of Galapagos to enjoy.

The rock star of Charles Darwin Research Station used to be Lonesome George, but those hoping to see him today will be disappointed. George was the last of the Pinta island giant tortoises and lived at the Darwin Station from 1972 until he passed away in 2012. Decades of effort went into encouraging George to breed with females from genetically close Galapagos tortoise subspecies, but it all ended in vain. Today visitors can see poor George in a taxidermied state, together with a special exhibit about his life. 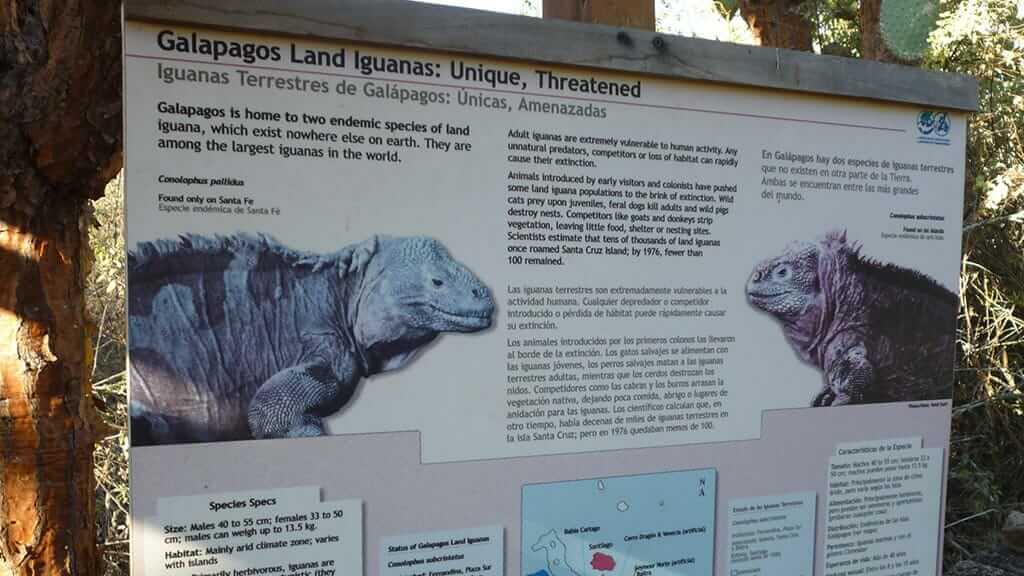 Where is the Charles Darwin Research Station?

The Charles Darwin station is in the town of Puerto Ayora on Santa Cruz island. Getting there is easy, just follow Charles Darwin Avenue (the main street) east for twenty minutes to get to the well-marked, expansive grounds of the property.

Things to take with you: drinking water, money for the cafe or gift shop & sun protection.

Show your National Park entry ticket for free entry to the station.

Before you visit it is important to manage your expectations. Some tourists unfairly compare the Charles Darwin Station to a zoo and are disappointed with their visit. So remember that all of the important conservation work and research is taking place behind the scenes. Visitors will not get to see this directly, but can get a small taste from the various Research Station exhibits. A little perspective is also needed – the giant tortoises here are for educationl purposes. For some it is a shame to see them kept in corrals, but the flipside is that many thousands of wild Galapagos tortoises exist today thanks to the breeding efforts that take place here. 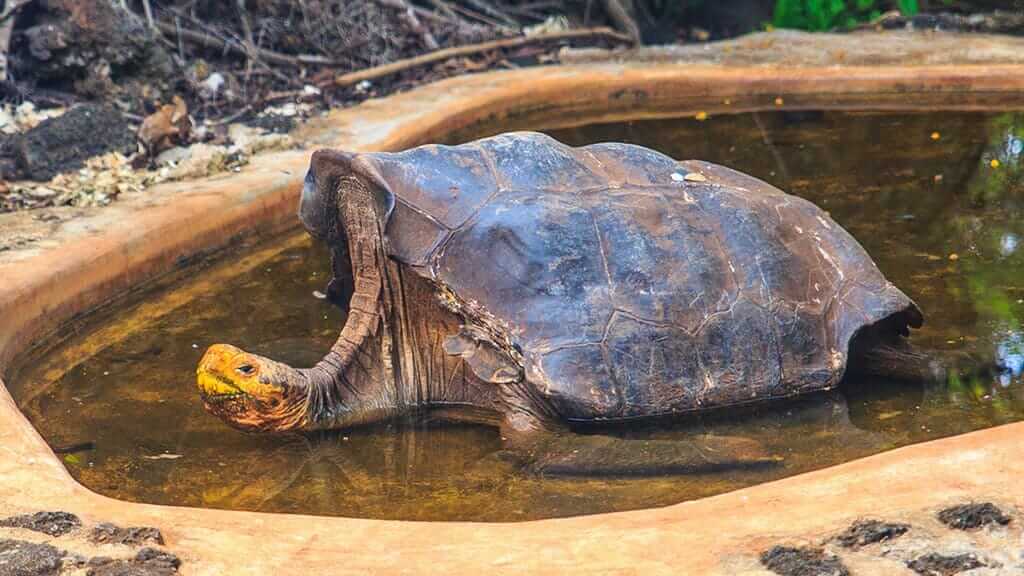 The facilities of the research station were inaugurated in 1964. Using the name of Charles Darwin was a logical choice given his importance to the Galapagos islands and natural history.

What role does the Charles Darwin Research Station play? It is a base for scientists to perform important research on the Galapagos Islands, and provide advice to the Galapagos Park Authority for the successful operation of the park. It is also a base for conservation projects that help to protect and restore the flora, fauna and habitats of Galapagos.

So while you appreciate all of the wonderful wildlife and landscapes during your Galapagos tour, spare a thought for the work of the dedicated conservation team of the Charles Darwin Research Station. 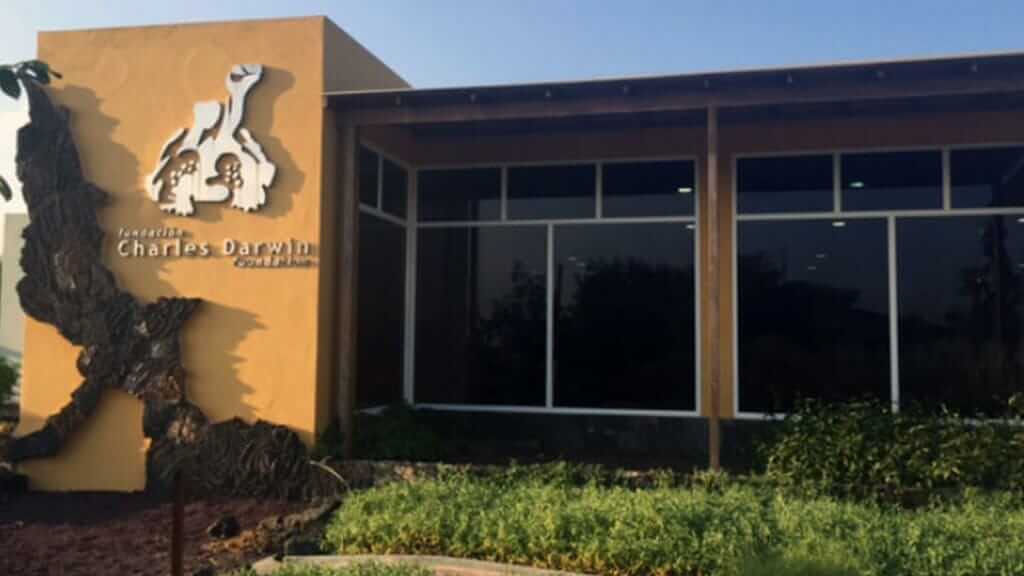 What projects does the Charles Darwin Foundation perform?

The project work of the Charles Darwin Foundation is multi-focused. Conservation of endangered or threatened species is obviously at the core, but equally important is habitat protection and control of invasive species. Species population and behavioral studies also compliment conservation work. So the role of the Charles Darwin Foundation is very diverse.

The most publicized conservation project is undoubtedly the captive breeding program for giant tortoises, which visitors can see in action at the Charles Darwin Station.

The Mangrove finch found on Isabela Island is close to extinction due to the Philornis Downsi fly. Today there are as few as 100 individuals, and 20 or so breeding pairs. The Charles Darwin Foundation together with San Diego zoo have formed a special project team to take care of finch chicks until they are old enough to survive the threat of the fly larvae. They are then released back into the Isabela mangrove forests and fitted with a tracking device to monitor their progress. It is hoped that the Mangrove Finch population size will eventually recover with this help. Land iguanas on Santa Cruz island are protecting in captivity as young reptiles to avoid predation by feral dogs, cats and pigs.

Invasive plant species like the blackberry bush cause damage to native plant habitat. For example at Los Gemelos Twin Craters on Santa Cruz Highlands, native Scalesia forest has been impacted, so the Charles Darwin Foundation work to remove invasive plants. 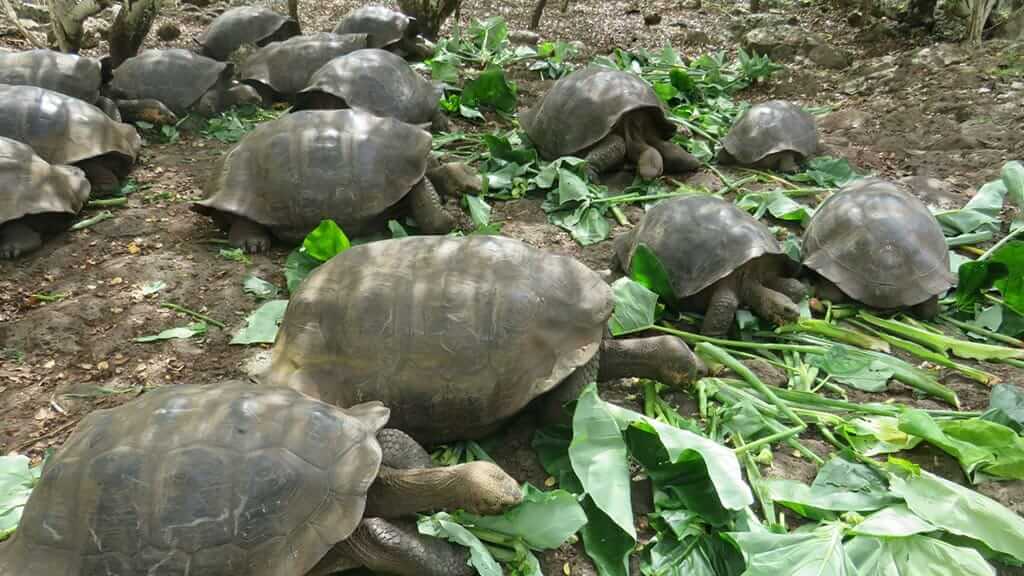 Education of Galapagos locals is also important. Creating awareness among the populace helps to get buy-in for nature preservation. Fishermen are educated to return accidental catch back into the ocean and use eco-friendly fishing techniques. School kids learn the importance of recycling to reduce plastic waste at Galapagos. All of this work helps to raise environmental awareness in the next generation.

These are but a few examples of the excellent work carried out at the Charles Darwin Research Station. The foundation is a nonprofit organization, whose work depends entirely on generous donations. If you would like to support their work directly, donations are gratefully recieved – a little goes a long way, and this is a great way for tourists to give back to the Galapagos Islands.

Contact us for a FREE GALAPAGOS VACATION QUOTE, or for help in planning your Galapagos trip. We will be happy to include a visit to the Charles Darwin Research Center into your trip itinerary.

In conclusion, The Charles Darwin Research Station carries out hugely important work to ensure that the Galapagos islands are here for future generations to enjoy. Galapagos tourists have the opportunity to learn about active conservation projects, and even contribute financially to their success. We highly recommend a visit to the Charles Darwin station to compliment your nature experience with some interesting education about the islands. Of course you are going to want to see those cute baby tortoises too! r was able to return the favour to Baltra, repopulating this important species. Today, both islands have healthy land iguana populations.