North Seymour is a highly recommended and popular Galapagos visitor site. This small island is often a favorite among travelers, thanks to its wonderful diversity of land and marine life, and fun activities. A short visit to North Seymour island can easily tick off a good handful of iconic Galapagos islands animals from your list. North Seymour is also known for Galapagos birds, where bird watchers can observe large sea bird colonies.

Read on for everything you need to know to plan your visit to North Seymour island. What wildlife can you find? Which activities and visitor sites await? And learn about the history and geology of the island.

• A large resident colony of blue footed boobies make it a great spot to see their famous mating dance (usually from June to August).

• Magnificent & Great frigate birds nest in the bushes, inflating their red pouches to attract a female mate (best month for this spectacle is June). See if you can spot the difference between the two different species.

• North Seymour is home to one of the largest sea lion colonies at Galapagos.

• Keep a lookout for Galapagos Land Iguanas, camouflaged against the arid scrub. 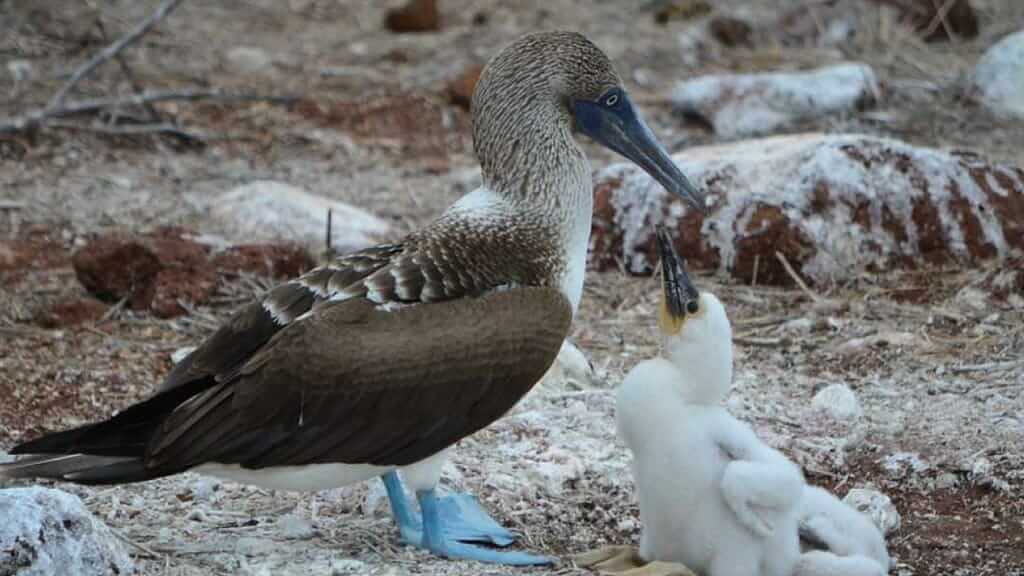 At first sight North Seymour may not look beautiful to the eye, it is very flat and dry, and may give you a choppy landing. But don’t be fooled by first impressions. The island's arid habitat makes the perfect home for reptiles, and an interesting land visit. The surrounding seas are also richer in nutrients than many other regions of the archipelago, so it's a top spot for snorkeling, with frequent shark sightings. It is also an important sea bird nesting area, perfect for keen bird-watchers.

Unusually for the Galapagos islands, North Seymour island is not a volcano. Instead the island was formed by the tectonic uplift of seismically shifting plates underneath the ocean. Imagine the flat sea bed being pushed upwards and emerging above the sea. Even today visitors can see evidence of shells and large rocks that used to be underneath the ocean.

The North Seymour ecosystem is a good example of the Galapagos arid vegetation zone. It is a very dry island, with low bushes and sparse Palo Santo and Opuntia Cactus forest. 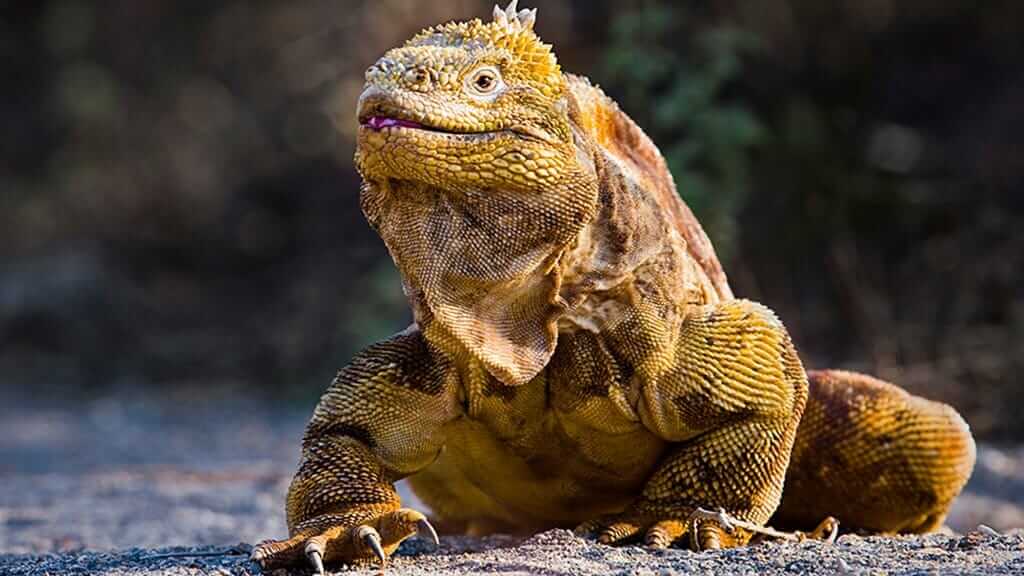 As with most Galapagos Islands, there is a history behind the name. In North Seymour’s case the name originates from famed English gentleman and couragous Royal Navy officer, Lord Hugh Seymour. He was a wealthy land owner at the time the British were exploring the world, and giving names to each island.

Originally North Seymour had no land iguanas. So, back in the 1930s, visiting naturalist Allan Hancock decided to move 70 iguanas here from nearby Baltra island. North Seymour is perfect habitat for the land iguana, with abundant food of Opuntia cactus pads and fruit. So, the new arrivals thrived and multiplied, eventually forming a large population in the thousands. Meanwhile, back on Baltra island, the Land Iguanas were unfortunately not faring so well. Baltra was used as a second world war US airbase, and GI’s wiped out the native iguana population after using them for target practise. So, in the 1950’s, North Seymour was able to return the favour to Baltra, repopulating this important species. Today, both islands have healthy land iguana populations.

Where is North Seymour Island? 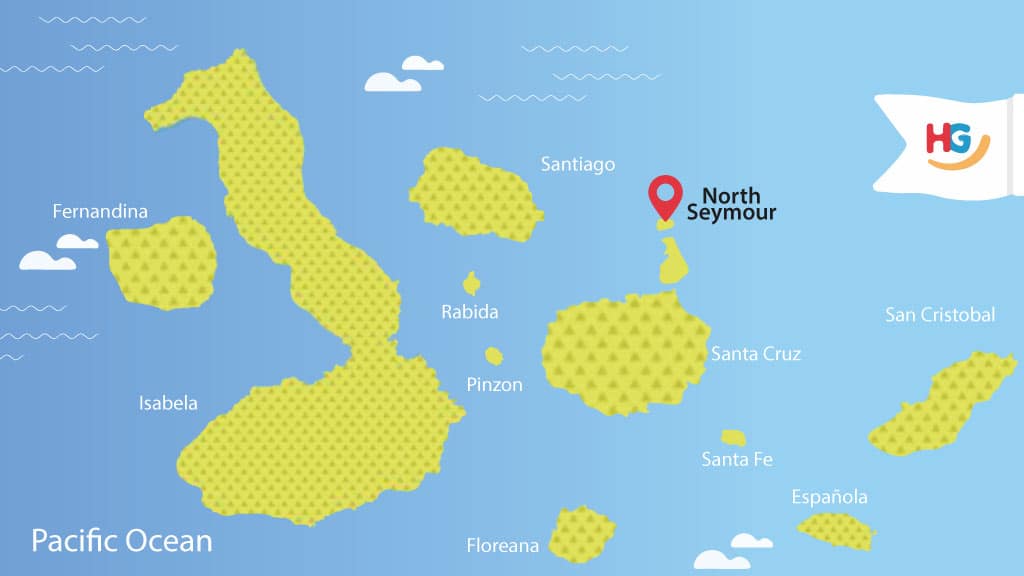 How to visit North Seymour? This small island is just an hour or so navigation from the Itabaca Channel, making it an ideal day tour destination from Puerto Ayora (Santa Cruz). It is a highly recommended inclusion to a Galapagos Land Tour itinerary, and is also often visited during Galapagos Cruises.

Visitors to North Seymour can enjoy gentle treking to explore the island by land, with observation of sea bird nesting sites. It is also one of the best marine areas at Galapagos, with wonderful snorkeling opportunities. Read on for more details about each activity.

The dry dock landing at North Seymour can sometimes be quite choppy, so take care disembarking the panga (zodiac). The visitor trail is circular, exploring the both the coastal region and interior of the Island. The trail is flat and easy, following a circular loop over rocky terrain, through palo santo & opuntia cactus forest.

The picturesque coastal trail follows the surf past a noisy sea lion colony. Sea lion pups like to play in the surf, while mothers snooze on the beach. Marine Iguanas and Sally Lightfoot crabs can also be spotted along this route.

Turning inland, the habitat changes to arid scrubland, leading visitors into the heart of the largest Frigate Bird colony at the Galapagos Islands. Here you can spot both Magnificent and Great Frigates. June is a great month to see the wonderful spectacle of male frigates trying to attract a female to their nest. They inflate their impressive red throat pouches like balloons, and spread their wings to attract attention. Females fly overhead, sizing up their options, before choosing their mate.

This stretch of trail also passes close to a blue-footed booby nestsing site. Their breeding season runs from June to August, when lucky visitors can witness their groovy mating dance. July to September are the best months to see their cute, fluffy chicks. Also keep your eyes peeled for land iguanas resting in the shade of opuntia cactus. They blend surprisingly well into the scrubland, with perfect camouflage. The trail winds back to the dry dock where your boat will be waiting. 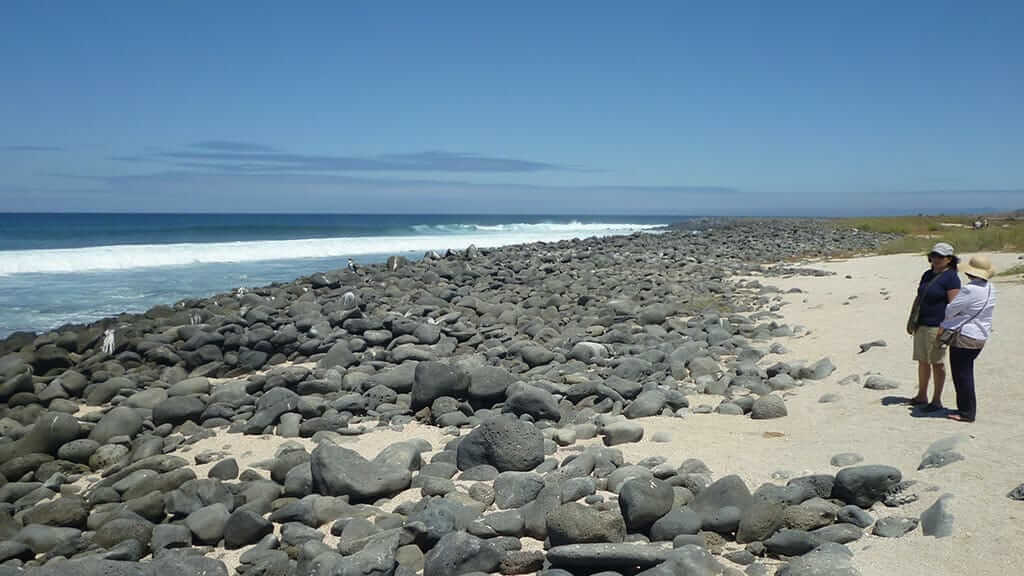 The area around North Seymour Island is one of the very best snorkel and dive sites at the Galapagos islands. The upwelling phenomenom in the sea here means the water is cold, and full of rich nutrients, making perfect conditions for marine species.

There are several different snorkel sites available. Your naturalist guide will choose the most suitable one based on local conditions on the day. Currents are not usually strong here.

Some of North Seymour's underwater highlights include: Green Sea Turtles, Sea lions, Whitetip reef sharks, and and array of colorful reef fish such as King Angelfish, Parrotfish, Hogfish and Rays. Sometimes lucky snorkelers might even spot Hammerhead or Tiger sharks cruising through. 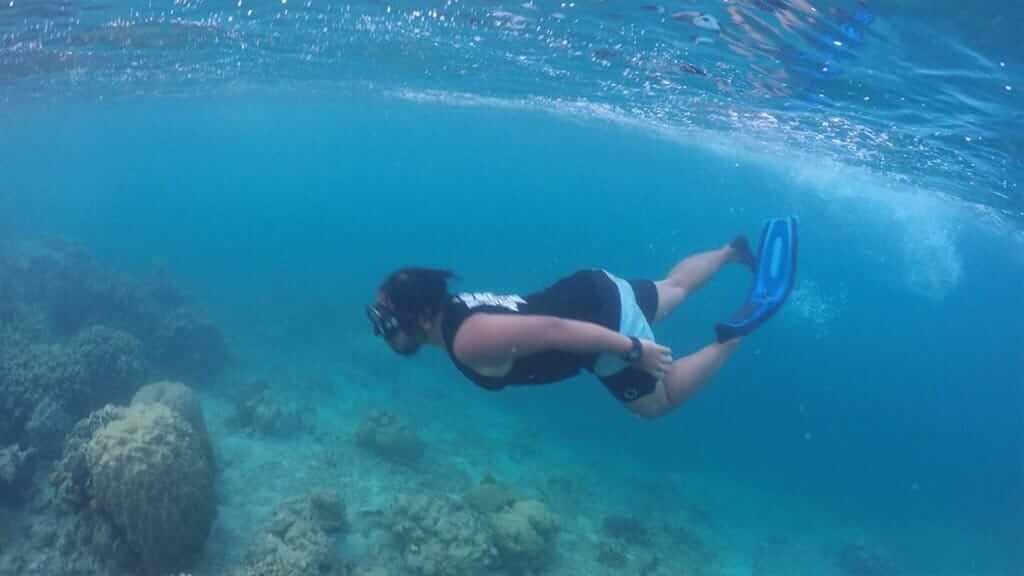 In conclusion, North Seymour island should definitely be on your radar when planning your trip to Galapagos. This small island has something for literally everyone, on land and in the sea. Not only is it one of the very best islands to observe large colonies of sea bird, but it tops it all off with an unforgettable snorkeling experience. What's not to love?