The Sally Lightfoot Crab is an unmistakably vibrant Galapagos character. Their striking colors make them extremely photogenic against the black lava rocks they call home, and popular with visitors. Sally Lightfoot crabs boast a wonderful ability to walk on water – with just a quick hop, skip and jump to escape from danger. They are also one of the most frequently spotted creatures on Galapagos shores. Crabs may not sound especially exciting, but check out the photos below in this blog and we think you'll change your mind!

Read on for everything you ever wanted to know about the Galapagos Sally Lightfoor crab. Where and When to see them? How to recognise them? Plus lots of fun Sally lightfoot crab facts and information. 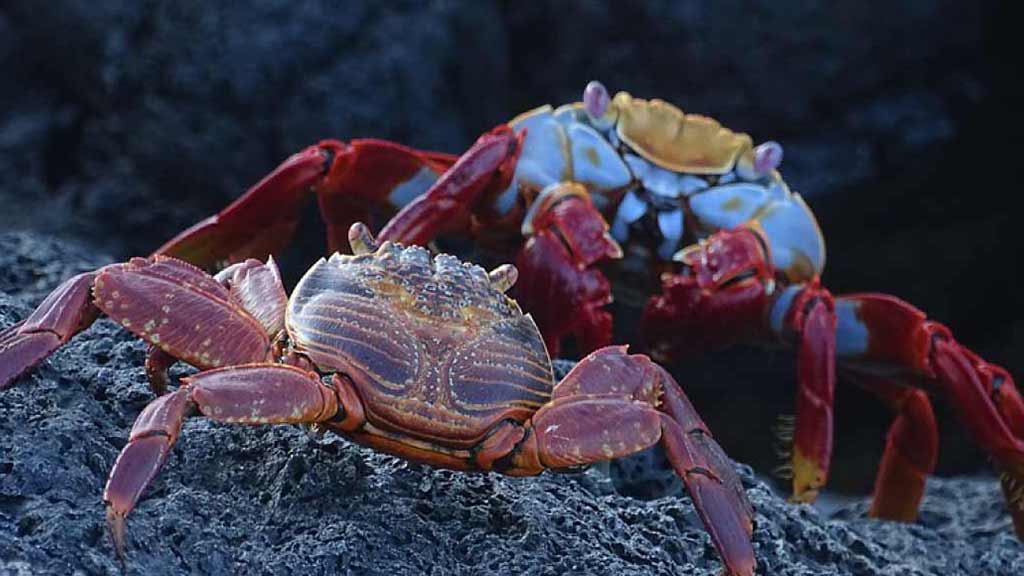 How to See a Sally Lightfoot Crab at Galapagos?

The Sally Lightfoot Crab is a very easy species to tick off your Galapagos wildlife list. They are visible on any Galapagos beach shoreline, usually hanging out close to black lava rocks with tidal pools. They are rather timid creatures, often scurrying off when humans approach, but thanks to their bright coloring they are easy to spot even when hiding in between tight cracks in the rocks.

Where to see Galapagos Sally Lightfoots?

Sally Lightfoot crabs inhabit every Galapagos island, so you will not need a special itinerary to see them. Keep your eyes peeled around rock pools, lava crevasses & shallow waters. Adult Sally Lightfoots in particular are easy to spot thanks to their bright colors, while adolescents blend in better against the rocks.

When to See Them?

Sally lightfoot crabs are active all year round at the Galapagos islands. They have no defined breeding season, mating often and continuously throughout the year. 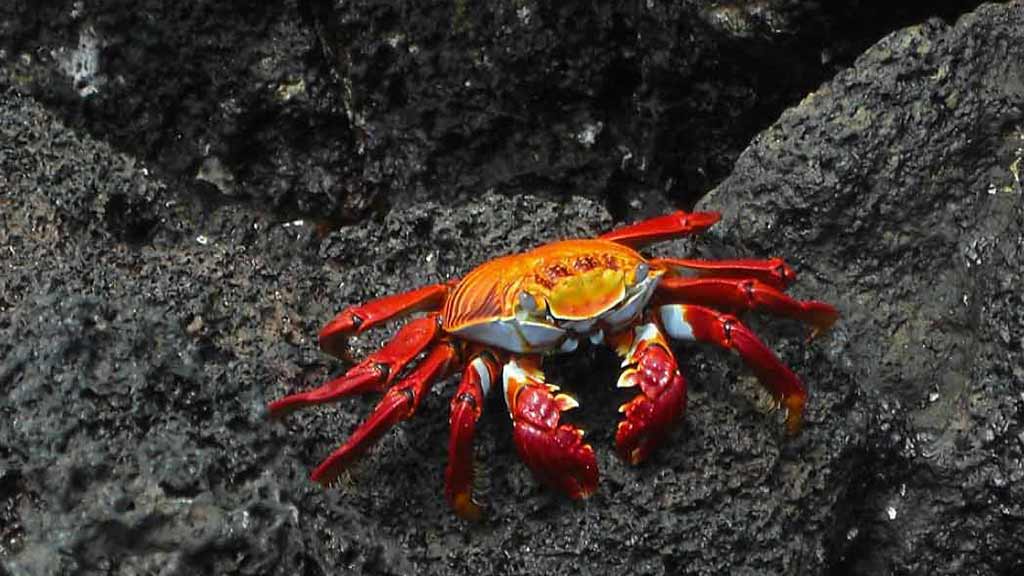 Everything you need to know about Sally Lightfoot Crabs

How to recognise a Sally Lightfoot Crab?

Adult Sally Lightfoot crabs have a very distinctive appearance. They are brightly colored with red/orange shells, a sky blue belly, yellow face and pink eyes. In terms of size a Galapagos sally lightfoot crab can grow to between 8 and 12cm, which is slightly larger than their continental counterparts.

Young Sally lightfoot crabs have a much darker colouration providing a higher degree of camouflage against black lava. Young crabs have a long list of Galapagos predators so effective camouflage is essential for their survival. Each time an adolescent sally lightfoot moults his shell, their red spots become gradually larger until they obtain full adult red colourings.

Why do adult sally lightfoot crabs no longer require such camouflage? Firstly, they are no longer such easy prey as their shells have become much harder. Secondly, adult crabs need their bright colors to successfully attract a mate.

Where do Sally Lightfoot crabs live? Their range covers western coastlines of south and central america, and of course the Galapagos islands.

Sally lightfoot crabs are land dwellers, spending their time on dark lava rocks of intertidal zones. Their strong claws help them to cling to rocks when waves hit, allowing them to inhabit this zone where other animals find life more challenging. 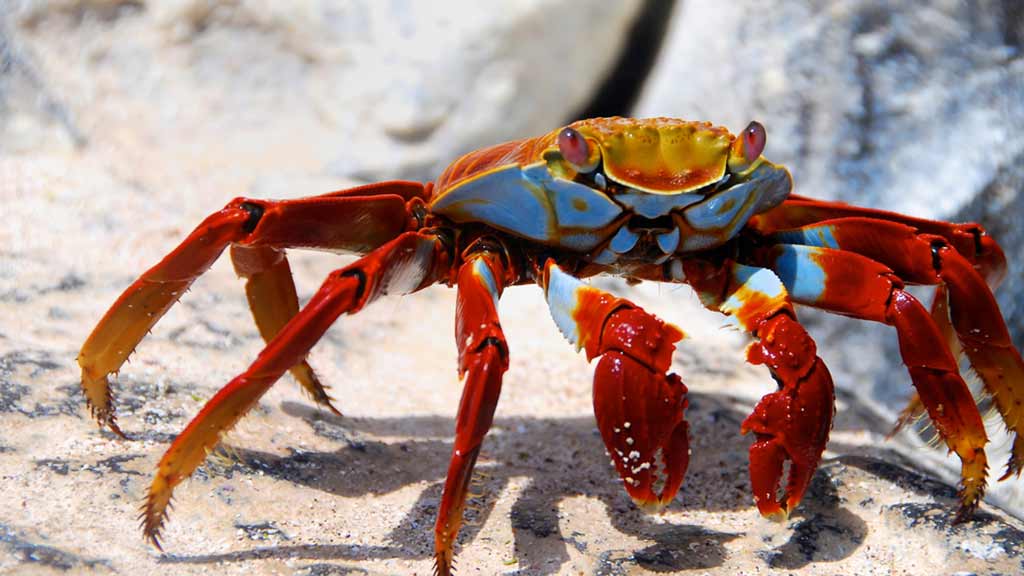 These colorful crabs are extremely quick and agile, helping them to survive the wide range of predators that include sally lightfoots in their diet. Their predators include octopus, fish, lava heron, moray eel, lava lizards and introduced species like rats, cats and dogs. Young crabs are easier prey with their soft shells, while adults have a harder shell for protection. Adult crabs are particularly impossible to catch, as many tourists can attest to. They have 10 legs, can run in all four directions, and seem to always be ten steps ahead of you.

Sally lightfoot crabs breed all year round. Females carry eggs on their stomachs until they are ready to hatch in the water. The small larvae swim to deep waters in large groups, surviving on phytoplankton. They moult various times before transforming into baby crabs and swimming back ashore.

What do Sally Lightfoot Crabs eat?

The Sally Lightfoot crab diet consists mostly of green and red algae and seaweed from lava rocks. They are also opportunistic predators, which means they eat just about anything else that they find. This can include other crabs, barnacles, dead fish, eggs, bird droppings, baby sea turtles, and much more besides. They are beach scavengers, and play an important role in the Galapagos coastal ecosystem, keeping beaches clean of organic matter.

• Unusually for crustaceans, the Sally Lightfoot crab can run in all four directions as well as climb up vertical slopes. This extreme agility, as well as their ability to hide in tight cracks in the lava, is vital for their survival.

• Where does the sally lightfoot crab name come from? In truth there are various different stories about the origin of their name. Some say it comes from the name of a light-footed Caribbean dancer, others from their skill at skipping over salt water (Sal is spanish for salt).

• Sally Lightfoot Crabs enjoy a special symbiotic relationship with Marine Iguanas. These two species are often to be seen together at Galapagos, with crabs eating parasites and ticks from the skin of iguanas. The crab gets an easy meal, while the iguana has these pests removed for free.

• When on land, Sally lightfoot crabs hold water in their shell in order to breathe, releasing drops onto their gills whenever required. The same water can also be used in defence, to be squirted at enemies if under threat. Check out our other blog post to learn more about other Galapagos Retiles, Crustaceans & Animals. 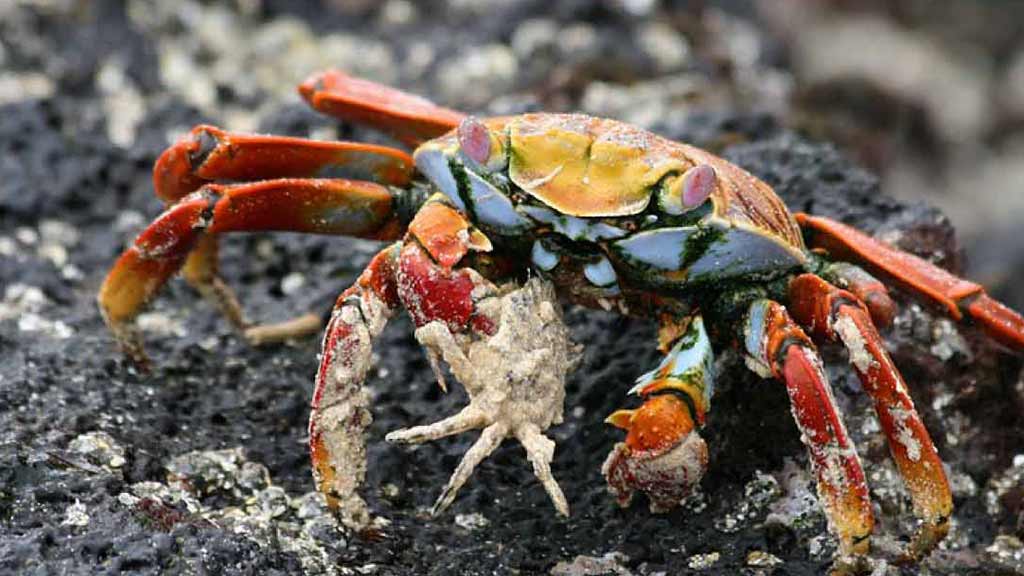 In conclusion, the Sally Lightfoot Crab is one of the most colorful and attractive Galapagos animal species. Adult crabs contrast spectacularly against black lava rocks & white Galapagos sand – an easy opportunity for wonderful wildlife photos. You’ll spot them just about everywhere along Galapagos shorelines. Just don’t get too close or they’ll use their famous lightfeet to skip quickly away.