Galapagos in December: What to expect | Happy Gringo Travel Blog

Galapagos in December: Weather, Wildlife and What to Expect

Is December a Good Month to Visit the Islands?

One of the most common questions we get asked: when is the best month to travel to Galapagos? Is our vacation to Galapagos in December a good idea, or should we go in November or January? Is it too hot / cold / rainy in December? Are the December seas warm enough for swimming? Our answer is always the same – December is a great month at Galapagos, and so too are all the other months! The Galapagos Islands are an all year round travel destination, with comfortable weather and great wildlife viewing every month of the year. So yes, December is as good a month as any to visit Galapagos.

Read on to discover what a trip to Galapagos in DECEMBER entails – everything you need to know, from weather to wildlife.

What to expect at galapagos in December?

December is a TRANSITION month, changing from the COOL & DRY  Galapagos season, into the WARM & WET. Visitors should expect changeable and variable weather conditions through the month, starting off cooler, and ending with a strong tropical sun over Christmas and New Years. Sun protection is important even if skies are cloudy - on the equator it is easy to burn your skin if proper care is not taken.

At the end of the COOL & DRY months, December still sees cooler seas, rich in nutrients, perfect for marine species like Sealions, Sea Turtles, and species of Seabird, who find food plentiful.

The first rains of the WARM & WET season may come in late December, a ray of hope that will bring the greenery back into life on the highlands, so land Galapagos species are easily spotted in December, even though their food sources are still scarce. Land birds in particular are happy with the arrival of the first rains, a sign for them to start nest building ready for their breeding seasons.

December sees HIGH demand for Galapagos cruises, especially over the Christmas & New Years period - during this time cruise spaces are often sold out many months beforehand. We therefore strongly recommend booking well in advance, and consider that cruise prices may increase for this very popular travel date. December is also a good time for a Land Tour, but again try to book in advance to avoid disappointment of missing out on hotel or day tour spaces.

December at Galapagos is the end of the cool and dry Galapagos season - the skies are still cloudy but the sun will soon be back. Average temperatures in December hit 26 degrees celcius, with just 0.5 inches of rainfall across the month. Even on a cloudy day the sun behind the clouds at the equator is extremely strongm so don't forget to use sunscreen and a hat to avoid burning. 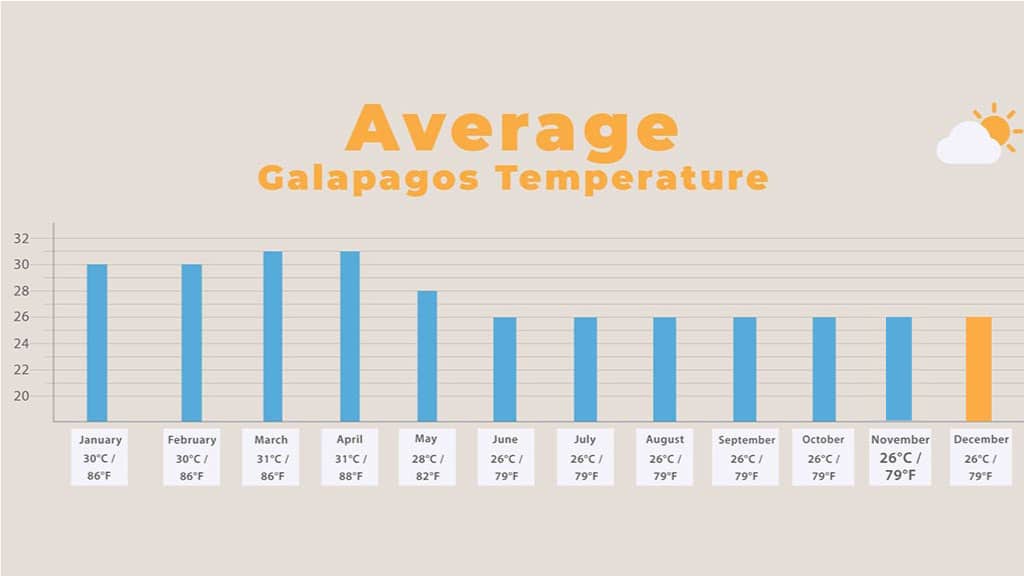 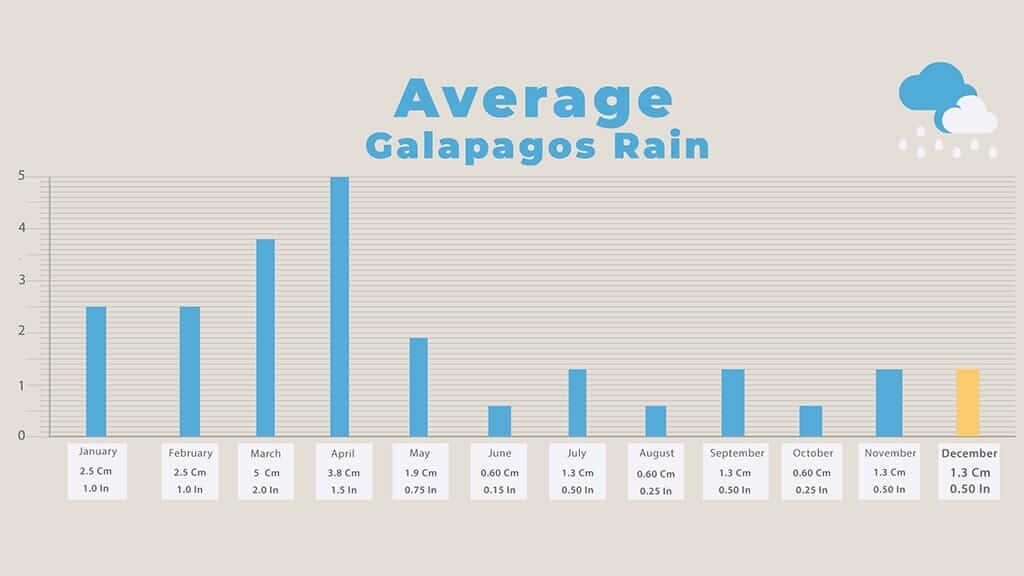 Water Temperature at Galapagos in December

December Galapagos water temperatures average at 22.5 degrees celcius, but tend to be higher in the latter week as seasons change. A wetsuit is recommended for snorkelers, and marine species are still very active throughout the month. 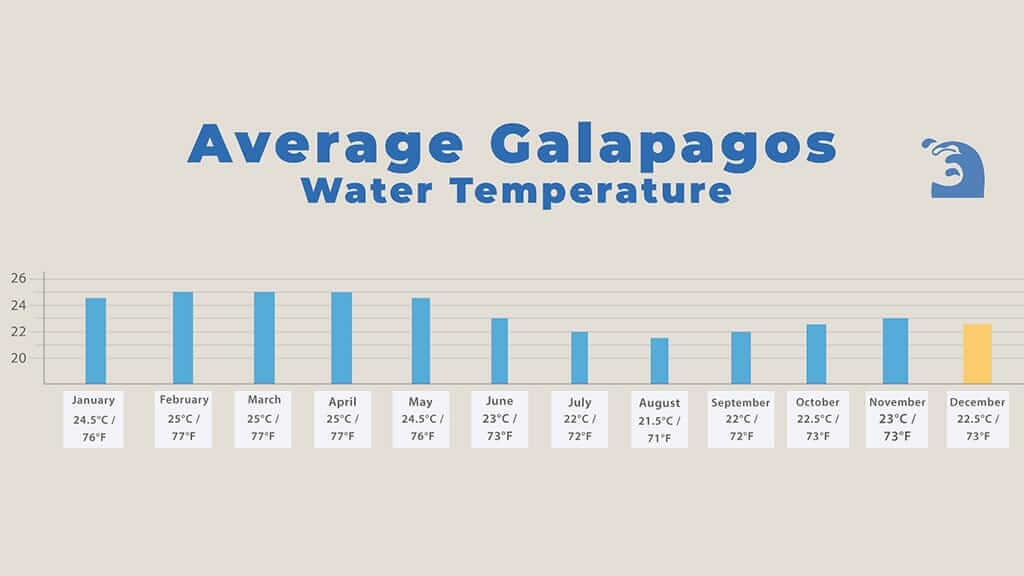 Which animals can I see at Galapagos in December?

Is December in Galapagos a good month for wildlife? Remember, every month at the Galapagos Islands (including December) is amazing for wildlife spotting, and almost all land and marine species can in fact be found all year-round.

That said, each month does bring something different to the archipelago. Subtle changes in animal behavior such as breeding, nesting, hatching, feeding, growing, migrating. The Galapagos natural world is in constant change. December is a Galapagos transition month, so both land and marine species are active.

We wave goodbye to the waved Albatross colony on Espanola island. Like clockwork, every December they head out to the open ocean in search of for better feeding grounds for the coming months. This is the first time their fledglings leave the nesting grounds - an emotional moment - they won't return again until mature enough to mate. Any Galapagos Albatross that has not flow the nest by the end of December will likely be stranded here as the winds die down making cliff-top take-offs impossible.

Bird watchers should head to the highlands of Santa Cruz or other islands. With the arrival of the first rains we see increased activity from the Galapagos land birds like Darwin's Finches, Short eared Owls and Flycatchers, all preparing nests for their breeding season. This activity continues into January as rain becomes a more common occurance.

Whilst all this is happening, other Galapagos species are beginning their mating season. Green sea turtles couple-up, and Marine Iguanas change color to attract a mate and dig nests. This is particularly special on Espanola island where Marine Iguanas change their skin into green and red combinations, earning them the nickname of Christmas Iguanas.

Check out the infographic below for some of the special wildlife highlights to expect at Galapagos in December. 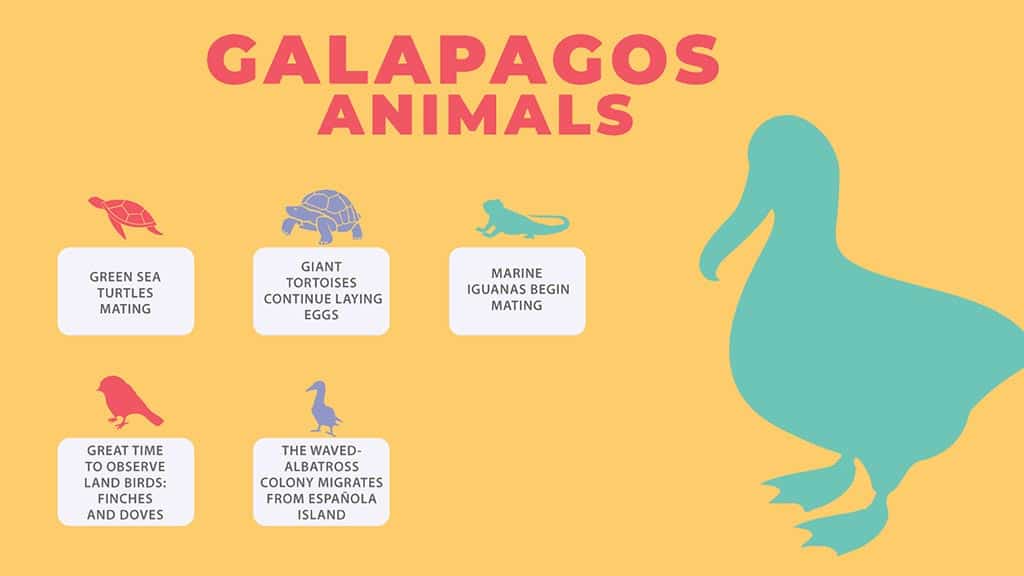 We really hope that this December in Galapagos blog was useful. If you are looking for a complete summary of Galapagos climate across the year, then also check out our general Galapagos Weather blog.

If you need any help planning your Galapagos Vacation (in December or any other month!), then just drop us a line.

In conclusion, December is a transition month making it an attractive time to travel. The weather is mostly still dry and cool - perfect for active excursions. Wildlife is interesting too, especially if you visit Española island to watch the waved albatross colony depart. If you do plan to travel in December, especially over Christmas of New Years, then the best advice is to plan well in advance - these dates are often completely booked out up to 6 months ahead!