The Lava Heron is an endemic Galapagos bird, meaning that you’ll only find it here at the Galapagos islands. Perhaps the most impressive attribute of the lava heron is its wonderful camouflage making them blend in perfectly with their surroundings. Galapagos lava herons are usually seen stalking prey on black lava rocks or island shorelines. They are a common sight at the Galapagos islands, so visitors have a great chance to tick them off of their bird list.

Read on to learn more about the Lava Heron. Where and when to see them. Plus lots of other interesting Galapagos heron facts and information.

The Lava Heron is a Galapagos ENDEMIC SPECIES. 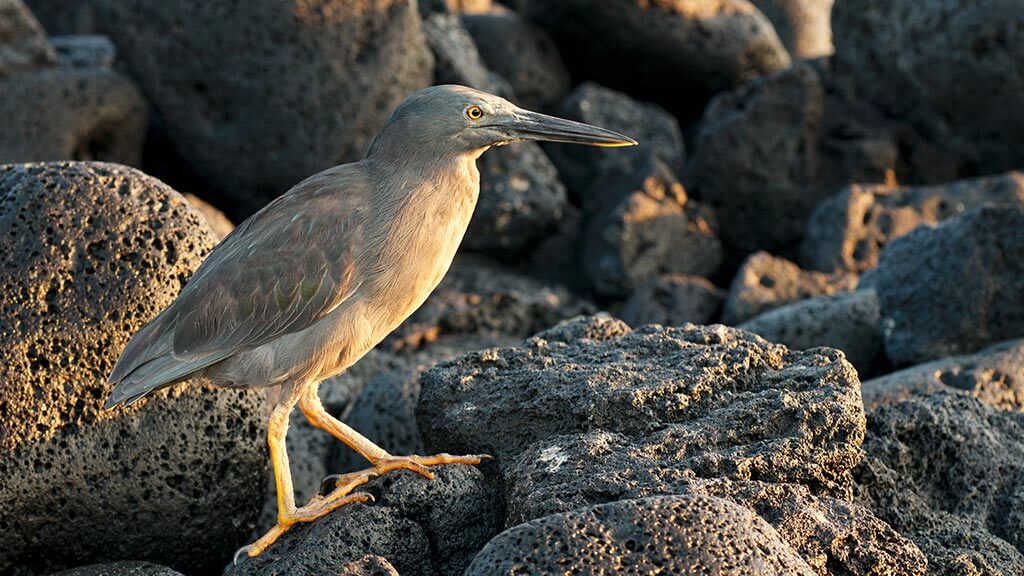 How to See a Lava Heron at Galapagos?

Where to see Galapagos Lava Herons?

Lava herons are a widespread species at Galapagos. They inhabit shorelines right across the archipelago, and are found on all main visitor islands. Keep an eye open for them on black lava rocks - here they blend in with terrific camouflage while hunting for prey. Galapagos lava herons have little fear of humans, so tourists can often get up close for great photo opportunities.

Lava herons are active at Galapagos all year round. The lava heron breeding and nesting season is variable but usually runs from September to March.

Everything you need to know about Lava Herons

How to identify a Lava Heron?

The Lava Heron is also known as the Galapagos Heron or Galapagos Striated Heron. In appearance they look rather small for a heron, averaging just 2.1kg in weight, and 35cm tall, with males slightly larger than females. They have evolved their uniform grey color as camouflage to blend in perfectly with dark grey/black basalt lava rocks where they hunt. Other distinctive lava heron features include a short crest on top of their head, yellow/orange eyes, and typically long thin legs. Juvenile lava herons can be recognised for their brown colored plumage.

Lava herons live and nest along lava rock and sand shore lines, saltwater lagoons, and mangrove forests of the Galapagos Islands. They occupy intertidal zones where they search for tasty morsels in tidal rock pools. They prefer to nest as solitary pairs rather than together as a colony. Males are known to be very territorial, chasing away intruders when necessary by raising its short crest. 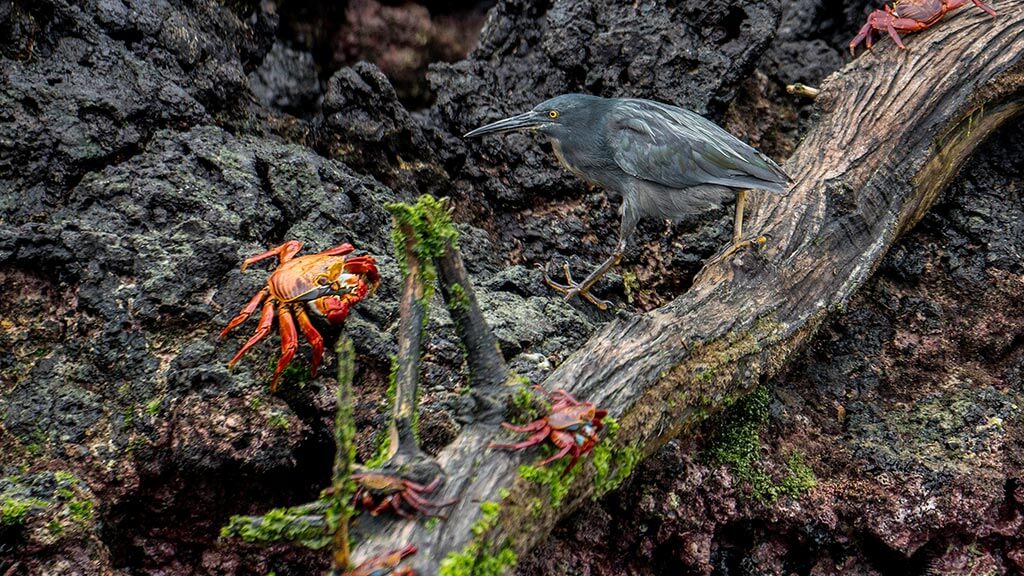 Galapagos lava herons are not big on flying. They prefer to stay on the ground and will only fly short distances when necessary. It is more common to see them walking or wading in search of food.

Lava heron breeding season is usually from September to March, or in periods after heavy rains. Male herons attract a mate by advertising calls and aerial performances. If a female is interested then courtship begins, with displays of stretching, bowing and cooing together.

The parents build their nest together with twigs, usually about 1 metre from the ground, in mangroves or bushes. The female usually lays 1-3 eggs that are incubated for around three weeks by both parent birds. Chicks fledge 34-35 days after hatching, and are already independent just two weeks later. Lava Herons can mate up to three times in a single year.

What do Lava Heron eat?

Galapagos Lava Heron diet consists mostly of crabs and small fish found in rock-pools, or small lizards caught among the rocks. They will also eat insects, shrimp, as well as eggs and chicks of smaller birds.

Lava herons are stealth hunters. They stand motionless for long periods of time, or wade slowly at the waters edge before spearing their unsuspecting prey. Surprisingly for a heron species, the Lava Heron tends to forage along open shorelines rather than in marshy waters. Galapagos lava herons are usually solitary creatures, preferring to hunt alone for better chances of food. They are territorial birds, and will fight one another if necessary to protect their feeding ground territories and favorite foraging area.

Lava herons have become accustomed at eating quickly. Galapagos hawks, Frigate birds and Lava gulls are often on the lookout to steal their meals.

• Lava Herons are monogamous birds. They breed with only one mate at a time during a single breeding season, but may look for a new mate for the following season.

• It is very easy to tell when an individual lava heron is ready to mate. Their legs change color from a dull grey to a bright orange, and the male’s bill turns from grey to black.

• There is still much scientific debate about whether the Galapagos Lava Heron is a species or sub-species in its own right. General concensus today is that they are a sub species or color morph of the Green-backed Heron. At Galapagos they adapted new habits and changed to a greyer tone to give them advantage in this different habitat.

• The Galapagos Lava heron is listed as least concern and not considered to be an endangered species. But that’s not to say that the Lava Heron does not face any threats. Invasive species can be problematic, with cats capable of hunting herons, and rats or pigs happy to dine on heron eggs or chicks. Although there is no direct conservation project to protect this species, they do benefit from general invasive species irradication projects. 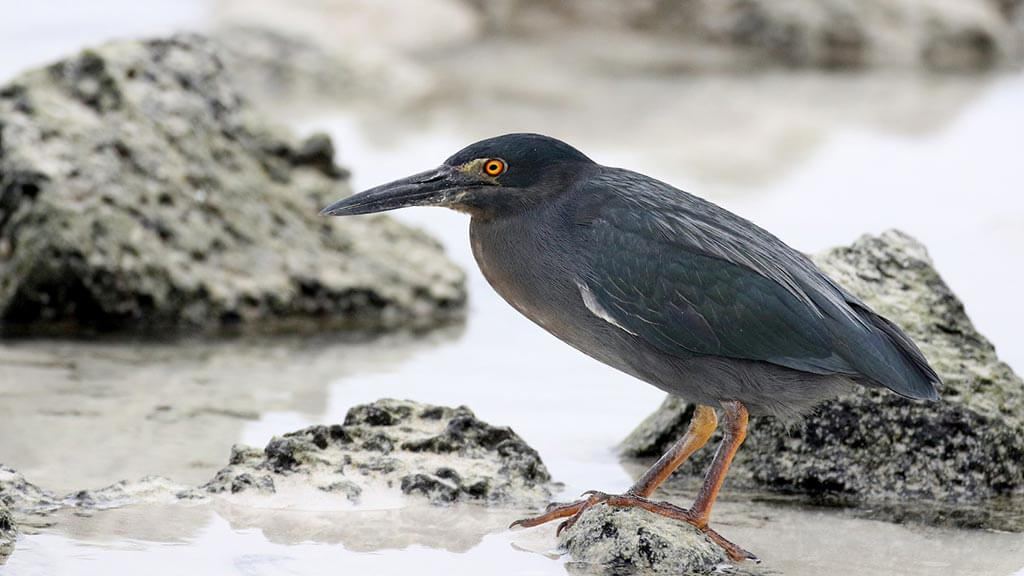 If you enjoyed this post, then we think you’ll also love our Galapagos Birds blog.

In conclusion, the lava heron is an interesting endemic Galapagos bird species. They have adapted unique camouflage to survive and thrive in their Galapagos habitat. They have also learned to practice unique behaviors compared to other heron species. It is quite common for visitors to spot Lava herons hunting on the rocks or wading the shallows. So take a moment to appreciate their skill at stalking prey, and to take a few photos of these impressive birds.