The famous bird with red feet. Visitors to the Galapagos islands can see the largest red footed booby colony on the planet. Not only that but these inquisitive birds are happy to give you a unique close-up wildlife experience. Red footed boobies are the hardest to find of all the Galapagos boobies, hanging-out on just a few select islands. But the reward for visitors who do see them is a more off the beaten path encounter.

Read on for everything you need to know about the Galapagos Red Footed Booby bird. Where and when can you see them? How do they behave, and what do they eat? Plus heaps of other fun red footed booby facts. 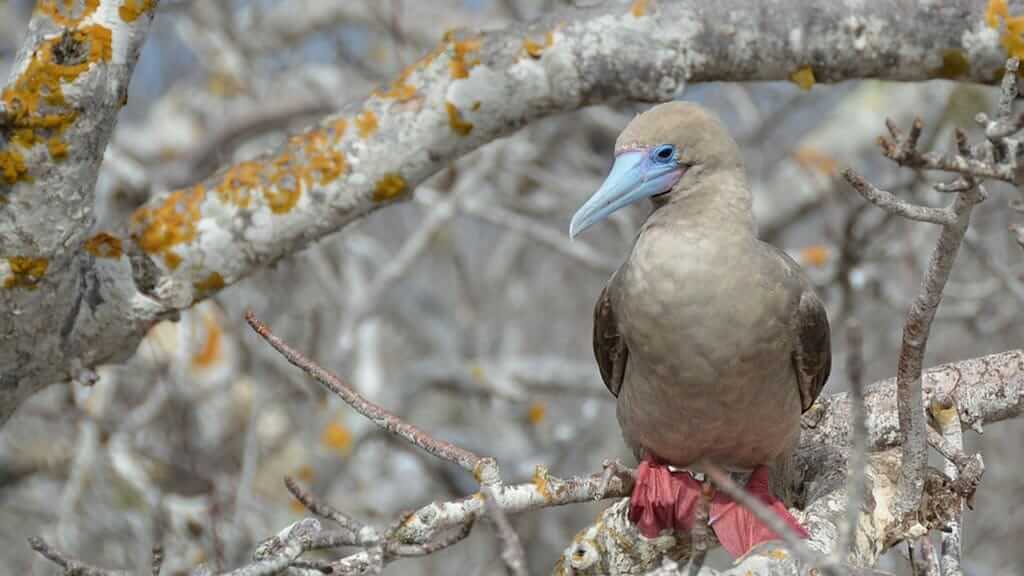 How To See a Galapagos Red Footed Booby?

Between 200 and 300 thousand red-footed Boobies live at the Galapagos islands. Although not a Galapagos endemic species, the population found here are non-migratory.

Galapagos red footed boobies are often hard to spot as they nest on outlying islands. This is somewhat ironic because they are also the most numerous booby species at Galapagos. But with careful trip planning it is easy to include a visit to a red footed booby colony.

Where to look for red footed boobies?

The most trusted way to see Galapagos red footed boobies is at a land colony. By far the largest red footed booby population live on Genovesa island - this is in fact the largest colony on the planet! There is also a smaller colony at Punta Pitt (San Cristobal). Occasional red-footed booby sightings are also possible on a small islet close to Floreana island, or at North Seymour.

Red footed boobies can also be spotted at sea. They fly great distances in search of food, often in large groups, so look our for them when cruising Galapagos. Most commonly they hunt in the more remote waters to the north east and east of the archipelago.

When is the best time to see them at Galapagos?

Red footed boobies inhabit the Galapagos islands all year round. The easiest time to spot them is usually during nesting season, from February to September.

Contact us for a FREE GALAPAGOS TOUR QUOTE, or for more information to plan your Galapagos islands vacation. If you want to see a Galapagos red-footed booby then let us know - we'll match you to the perfect itinerary. 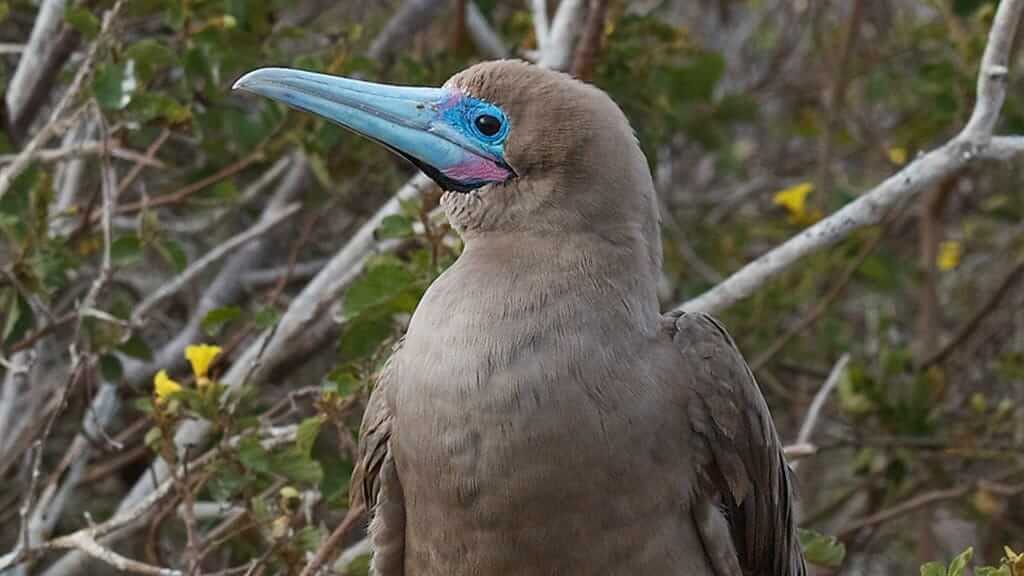 Everything you need to know about the Red Footed Booby

For starters, the red footed booby is the smallest of all booby species. They grow up to 77cm in height (compared to 90cm for blue footed boobies), with wingspan measuring up to 145 cm. The female red-footed booby is usually slightly larger than the male.

Of course the most distinctive feature of a red footed booby is their tell-tale bright red feet. They also have an attractive pale blue beak.

In terms of plumage things are also interesting. Red footed boobies are polymorphic, meaning that individuals vary in physical appearance. There are two different red footed booby morphs at Galapagos: brown and white. The brown morph is most common (95%), with brown feathers, white belly and tail. The less common white morph has mostly white plumage, with black flight feathers. Coloring is the same between both sexes.

Red footed booby chicks are cute and fluffy, ranging from white to grey/brown in color, with black beak.

Red Footed Boobies are a sub-tropical sea bird species, found throughout the Pacific, Atlantic and Indian oceans. They are a pelagic ocean faring bird, coming to land only to mate.

They nest mainly on coral atolls or volcanic islands, making the Galapagos islands the perfect home. Unlike other Galapagos boobies, the Red footed booby nests in the branches of small trees or on top of shrubs. 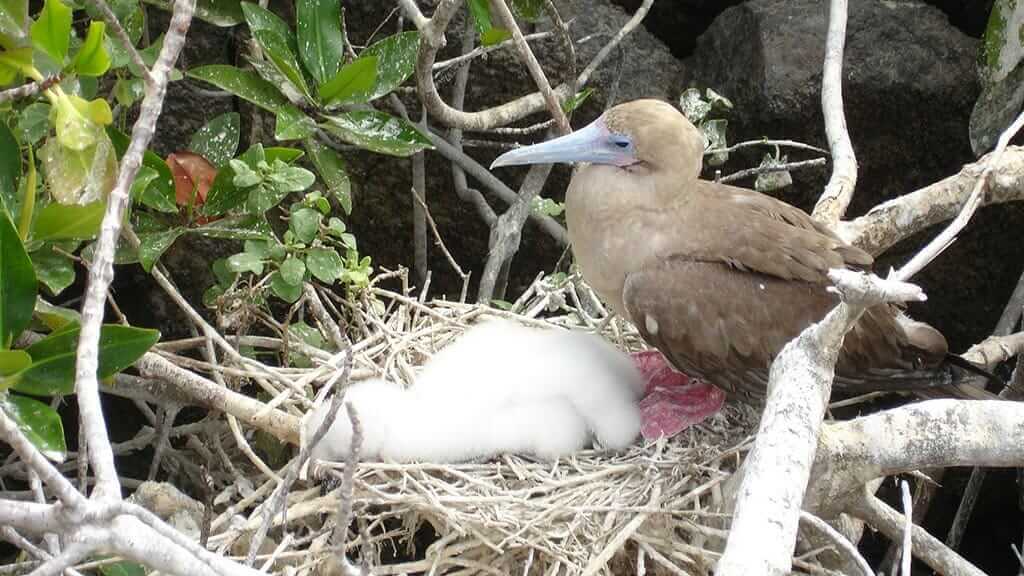 Red Footed Boobies are extremely strong flyers, and have been recorded travelling as far as 90 miles in a single journey in search of food. On land though they can appear rather clumsy. Take-off is challenging for them, and they depend greatly on the wind to do so. On land they take a running take-off, while at sea they use powerful legs to thrust up from the ocean and catch a gust.

Red footed booby courtship is a wonderful spectacle for any visitor lucky enough to catch it. It starts with sky-pointing where a male will lift his head vertically to show-off his attractive blue throat. Of course he also wants to show off his fancy red feet, which is done by lifting alternate feet in an amusing dance. All of this is done while sitting on a branch, so good balance is a must. Fortunately red footed boobies have adapted longer toes than other booby species, which allow them to grip braches.

A successful male builds his nest in a tree, with twigs and sticks collected nearby. A female red footed booby will lay just one egg in each breeding season (every 15 months). The egg is incubated by both sexes for around 45 days before hatching into fluffy booby chicks. Hatchlings fledge at around three months old, and is capable of long flights after five months.

What do red footed boobies eat?

The red footed booby is a sea bird that hunts and feeds on the open ocean. Their principal diet consists of flying fish and squid. Red footed boobies are such fast and agile flyers that they can catch flying fish as they jump out of the water.

Red footed boobies are also incredibly adept divers, plunging up to 30 meters below the surface to catch fish. When diving a red footed booby will wrap his wings close to his body for maximum aerodynamic effect. They enter the water like an arrow, piercing the surface with their long sharp beak. They also have nostrils that close to prevent water entering their respiratory tract. 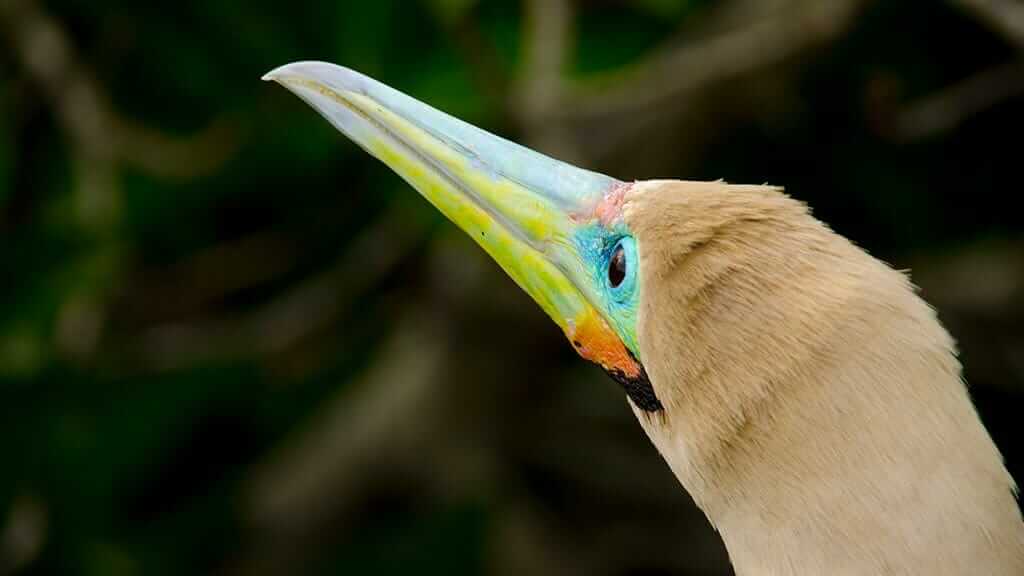 • The name “Booby” comes from the spanish word “bobo”, meaning foolish or stupid. This curious nickname is due to their funny behavior on land when wooing a mate, and their often clumsy take-offs.

• Red-footed boobies are monogamous and faithful to their partners for successive breeding seasons.

• Although the red footed booby is currently listed as ‘Least Concern’ by the IUCN red list, their global population is in decline. Invasive species such as dogs and cats threaten their nests, while feral goats can quickly destroy their nesting habitat.

• Red-footed boobies are also very vulnerable to El Niño weather conditions. During a severe El Niño event the Galapagos red footed booby population can be dramatically impacted. Warmer seas mean less food, which causes booby chicks to perish and adults also go hungry. With just one red footed booby egg laid every 15 months, it can take more than a decade for the Galapagos colonies to recover.

If you enjoyed this post, then check out more about Galapagos Birds, Blue Footed Boobies, or Nazca Boobies.

In conclusion, the Galapagos red footed booby is one of the most fascinating seabird species at the islands. Yes, visitors need to go further afield to see them, but the effort is rewarded. A visit to the huge Genovesa red footed booby colony in particular is a top Galapagos highlight. An entertaining mating ritual, fluffy chicks, and photogenic feet is a great winning combo!