The Pink Iguana of Galapagos certainly has an interesting story to tell. Incredibly pink iguanas spent millions of years undiscovered, right under the noses of visitors and scientists! Today pink iguanas are the most recent species discovery at the Galapagos islands. They were Identified as recently as 2009, proving once again that this remarkable archipelago still keeps secrets.

Read on to learn more about the Galapagos Pink Iguana. Where do they live? What conservation work is happening to protectt them? Plus lots more fun pink iguana facts.

The Galapagos Pink Land Iguana is an: ENDEMIC SPECIES

Let's take a quick peek at the pink iguana on BBC Earth:

How to See a Pink Iguana?

Ok, it's time to break the bad news. Galapagos tourist visitors will not be able to see any pink iguanas. They only live in one very specific area on a single Galapagos island. That area happens to be off-limits to tourists, and perhaps it's just as well. The Pink Iguana population size is aproximately 200 individuals. They are a critically endangered species close to extinction. So for now only scientists may enter the territory where pink iguanas roam.

Where to find pink iguanas?

The Galapagos Pink Land Iguana is found at only one spot on the entire planet: on the northern slopes of Wolf Volcano. Wolf is the northern most volcano on Isabela island, sitting directly on the equator line. Their habitat range covers just 11 sq km, and is shared with regular Galapagos Land Iguanas.

Everything You Need To Know About Pink Iguanas

National park rangers originally spotted a pink iguana by accident back in 1986. But proper scientific studies were not conducted until the year 2000. The long wait was over in 2009 when the pink iguana was finally recognised as a new species. New discoveries of large reptiles are extremely rare, so the pink iguana managed to cause quite a stir!

True to their name, Pink Iguanas have a salmon pink head and body, combined with distinctive black stripes on their back and tail. Their fancy pink colouring is due to a lack of skin pigment, thus revealing their blood underneath. Their unique skin coloring is thought to protect them against solar radiation on the equator. Pink iguanas can grow to over three feet long, and up to 15 pounds in weight. 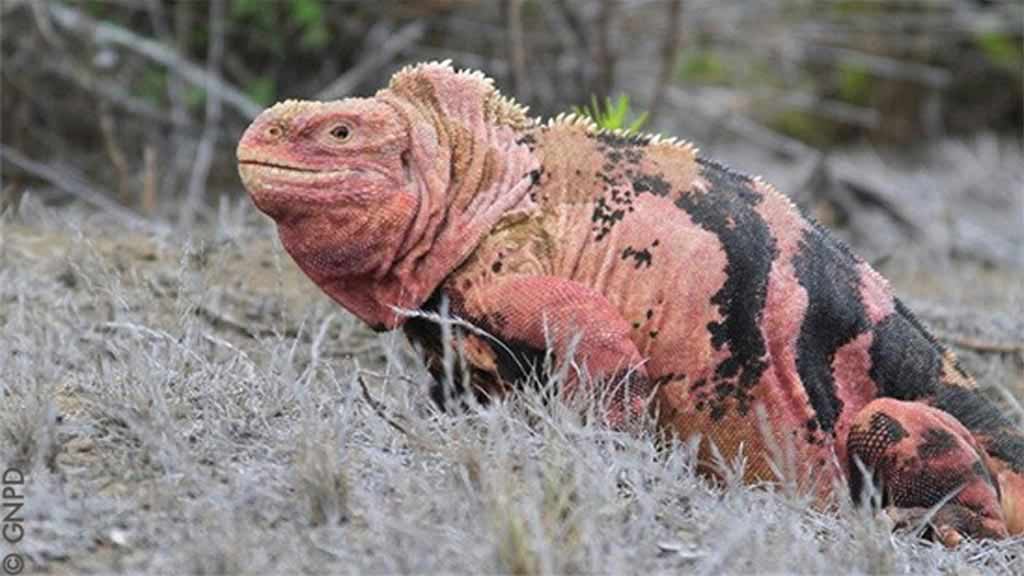 In truth very little is known about the behavior of Galapagos pink iguanas, as they are only recently being studied. What we do know is that they live in burrows dug 2 to 3 meters deep. They enjoy basking in the sun, but timidly retreat to their burrows if approached. Their habitat is dry grassland, providing them with a diet of cacti, shrubs and herbs.

The race is on to save the pink iguana from extinction! Today they number fewer than 200, and are listed as critically endangered on the IUCN Red List.

So, what are the main threats to the pink iguana population?

For starters, the fact that their habitat range is so small and specific does not help. Just one catastrophic event could wipe out their entire population in one go. That could be a climatic change, a habitat change, or threats from other species.

The fact that they live on the slopes of an active volcano is also alarming. Wolf Volcano did erupt as recently as 2015/16, although fortunately the iguana population was not affected. Next time though, who knows if they will be so lucky?

The principal natural predator of pink iguanas is the Galapagos hawk, the apex Galapagos land predator. Threats also come from invasive species like rats and feral cats who prey on eggs and young iguanas.

There could also be genetic issues to deal with. Breeding within such a limited gene pool is asking for trouble. Inbreeding is inevitable, resulting in a lack of genetic diversity and biological weaknesses.

The flip side of all of this of course is that pink iguanas have already survived millions of years by themselves. In spite of all the aformentioned risks. So perhaps human intervention is the last thing that they need. Right now ongoing studies are underway to understand more about this wonderful reptile species. Whether that leads to a full on pink iguana conservation program remains to be seen. 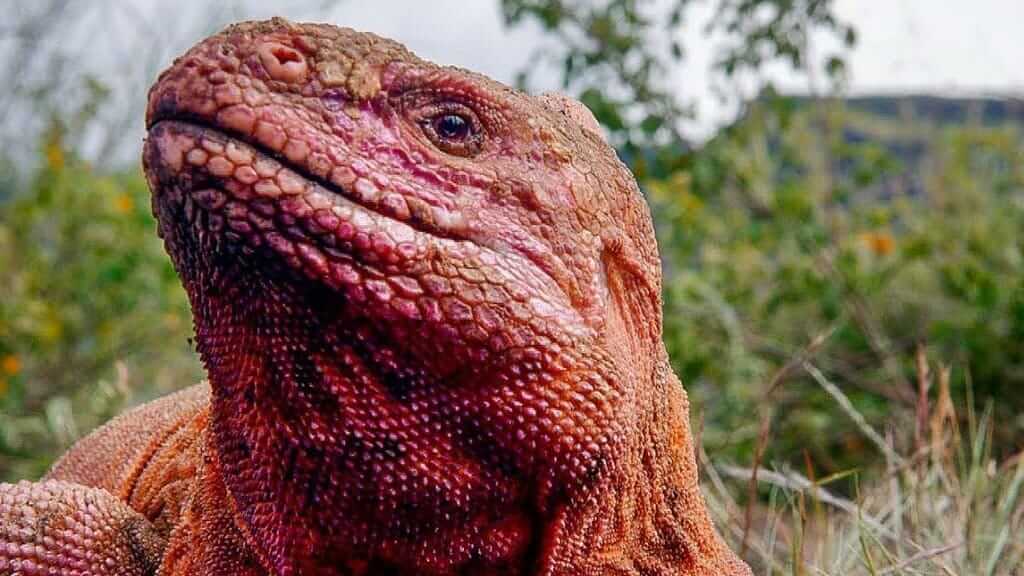 Photo taken from : the kids hould see this

• The pink iguana is one of the oldest reptile species on the planet. Genetic testing suggests that the species divergence happened an incredible 5.7 million years ago. This is an incredible discovery. It was previously believed that Land Iguanas first arrived to the Galapagos Islands only 1.8 million years ago, so scientists have had to rethink past theories. It also makes it all the more remarkable that they were only discovered and classified so recently.

• Much has been made of the fact that Charles Darwin missed out on discovering the pink land iguana during his voyage of 1835. Darwin did in fact set foot on Isabela island, but not at Wolf Volcano in the north. Had he done so then perhaps the existence of the Galapagos pink iguana would have been know long before 2009.

If you enjoyed reading this, then why not check out our posts about Galapagos Land Iguanas and Marine Iguanas too.

In conclusion, visitors may not be able to see a pink iguana face to face, but their story is one that should pique interest. That a unique species has existed for so long without being discovered is quite a romantic notion. It helps add to the whole mystery that surrounds the Galapagos Islands. Even more so to learn how close pink iguanas are to extinction today. If your Galapagos cruise visits Isabela then ask you naturalist guide to point out Wolf Volcano. Then cast your imagination to those 200 or so pink iguanas, and their solitary life there for millions of years.

If you enjoyed reading this, then why not check out our posts about Galapagos Land Iguanas and Marine Iguanas too.

Contact us for a FREE GALAPAGOS TOUR QUOTE with no obligations, or for more information to organize your own Galapagos vacation.