New Years in Ecuador – How to celebrate with the locals!

How is new years celebrated in Ecuador? Set apart from the typical western celebrations in Times Square or Big Ben, and in the bars and pubs around the world – Ecuadorian new years traditions take the celebration to the streets and everyone is welcome. New years in Ecuador is a big deal so be sure to join in the fun!

Many Ecuador new years traditions and customs are quirky and unique, making New Years Eve a great way to gain a glimpse into Ecuadorian culture. Ecuadorian people are especially warm and friendly at this time of year, and relish foreigners joining in their celebrations.

Read on to learn how to celebrate New Years in Ecuador like a local. Where to join the party? What to expect? Plus how to guarantee luck in love and money in the new year to come.

New Years eve in Ecuador – where is the best place to celebrate?

New years traditions take place right across Ecuador during the day of the 31st December, and family parties last through the night.

Generally the larger cities or towns are the best place to be for large scale celebrations, while each city district will often organise their own smaller parties. This means that cities like Quito, Guayaquil and Cuenca are great fun places to be on New Years Eve.

That said, improvised celebrations pop-up literally anywhere, from street corners in out of the way neighborhoods to small villages in the countryside. So wherever you find yourself in Ecuador on the 31st December you need not miss out on the action. 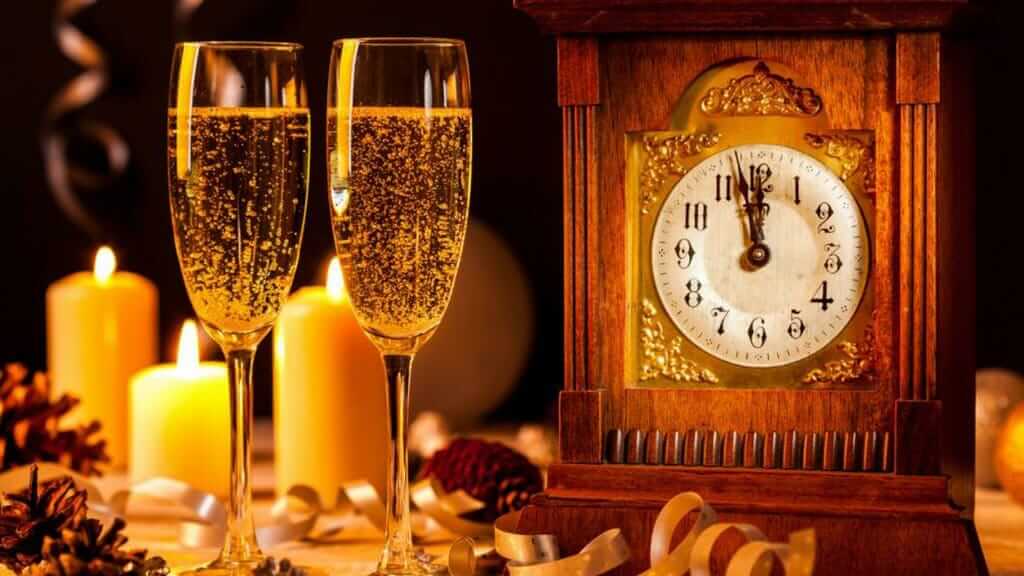 To the uninitiated some Ecuadorian new years customs may need explaining – there’s a lot more to it than hitting the booze in local bars! Some of the most popular traditions of New Years in Ecuador include:

A common question we get asked is: What do they burn on new years eve in Ecuador? This is known locally as the año viejo tradition, read on to learn more!

During the week between Christmas and New Year’s, effigies (known locally as Manigotes) of national and international politicians, celebrities and cartoon characters appear outside the houses and gathering places of the cities and small towns across the country.

Donald Trump dressed in jeans and old button-down shirts, Ecuador’s president, Sponge Bob, Speed Racer, and Shrek quietly appear out of the blue streetside. They are made from papier-mache and stuffed with paper and fireworks, waiting for New years evening to arrive. Similar to UK’s “penny for the guy” tradition, it is traditional to donate small change for the best prepared effigy dolls – this of course goes into the drinking fund for the big night.

There is often a more serious story to these life-sized mannequins. They represent the Año Viejo (the old year). So this is a chance to leave behind all of the trials and tribulations of the previous year and welcome better luck in the coming one. For this reason political figures are very common – people remember the bad things that came from politics that year that adversely affected the country.

At the stroke of midnight on the 31st December, the año viejo dolls are set on fire in the street. What better way to bring better fortunes for the country in the new year?

Tradition also dictates that you jump over the resulting fire twelve times to ensure happiness and prosperity in the coming year. Most companies, families or groups of friends have their own doll, so you will see this tradition repeated in the streets across any town or city.

What many people don’t know though is that the aaño viejo ritual originated from tragedy. Back in 1895, a yellow fever epidemic hit Guayaquil, devastating the port city. Family members stuffed coffins with the clothes of the dead and set them alight, symbolizing purification from the disease and new beginnings. 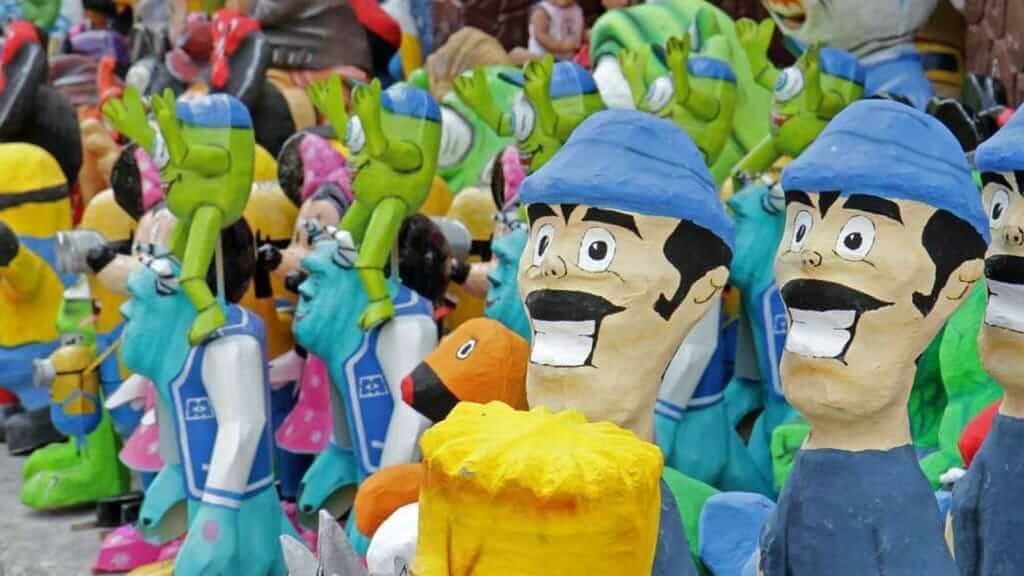 Viudas translates to the “widow of the old year”. Men across the country dress-up in drag, complete with balloons to accentuate their figures, high heels, short skirts and female wigs. They then take to the streets, stopping traffic to ask for small change before letting commuters continue on with their day.

When the afternoon of the 31st December comes around it can be hard to travel by car in the city due to so many viudas blocking traffic on every block. But it’s all for a good cause – the money that they collect goes into a communal pot to fuel the party later into the night.

What do the women of Ecuador do while their men make fools of themselves? They usually take photos to embaress the men with later in the evening, or are trusted to look after the spoils of their hard work. 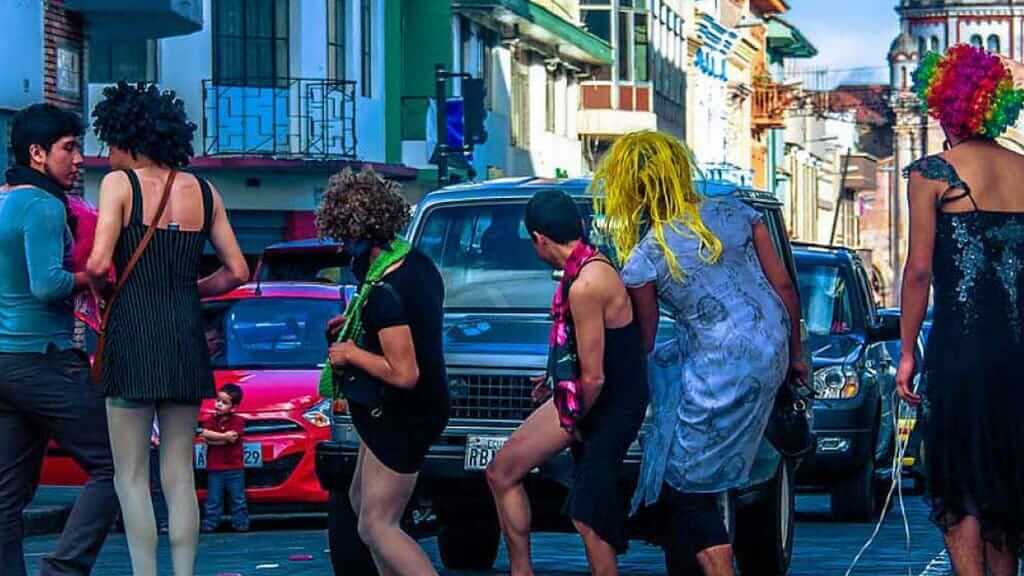 At midnight on New Year’s Eve, families gather and eat twelve grapes per person. This sounds like a curious custom but actually originates in Europe, where the 12 grapes are said to symbolize the twelve apostles. The number 12 could also represent the months of the year.

This tradition does have an interesting Ecuadorian twist though, the 12 grapes must all be eaten during the final minute of the old year! Yes, that’s a lot of grapes to eat in 60 seconds! But the reward for those who manage it is guaranteed good luck in the new year. 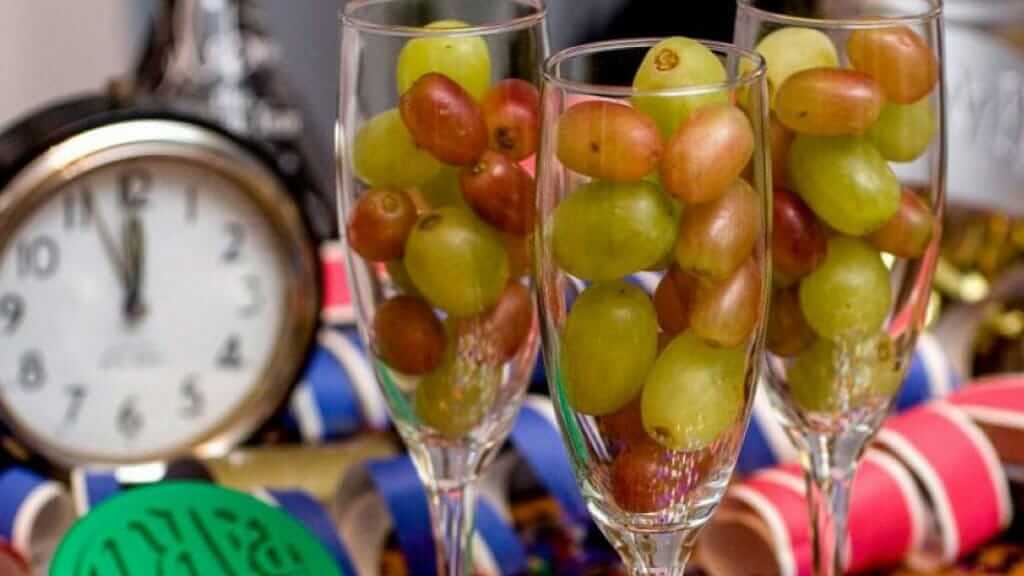 4. Choose the Color of your New Years Underwear carefully!

A lighthearted Ecuadorian tradition on New Years related to the color of the underwear that you use as the clock passes midnight. Vendors crowd the streets selling different colored undergarments. Red is predicted to bring you love in the coming year, while Yellow brings prosperity. Other colors have less significance, but you could always be creative and imagine something for yourself. 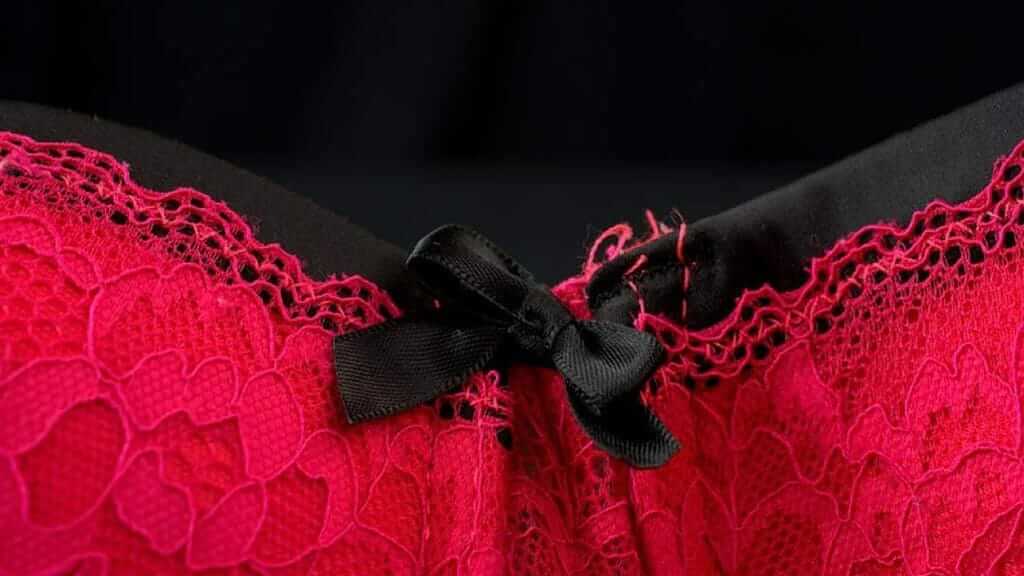 While there is hardly a need for a holiday to light off dazzling displays of fireworks in Ecuador, New Year’s Eve brings out a blitz of color exploding in the skies in the major cities of coast and sierra. Large scale firework shows are usually organised in Quito and Guayaquil, but the real show starts after midnight when hundreds of small family displays erupt in the neighborhoods around the country, often lasting into the wee hours of New Year’s Day. If you have access to a rooftop terrace then the views across the city are spectacular! 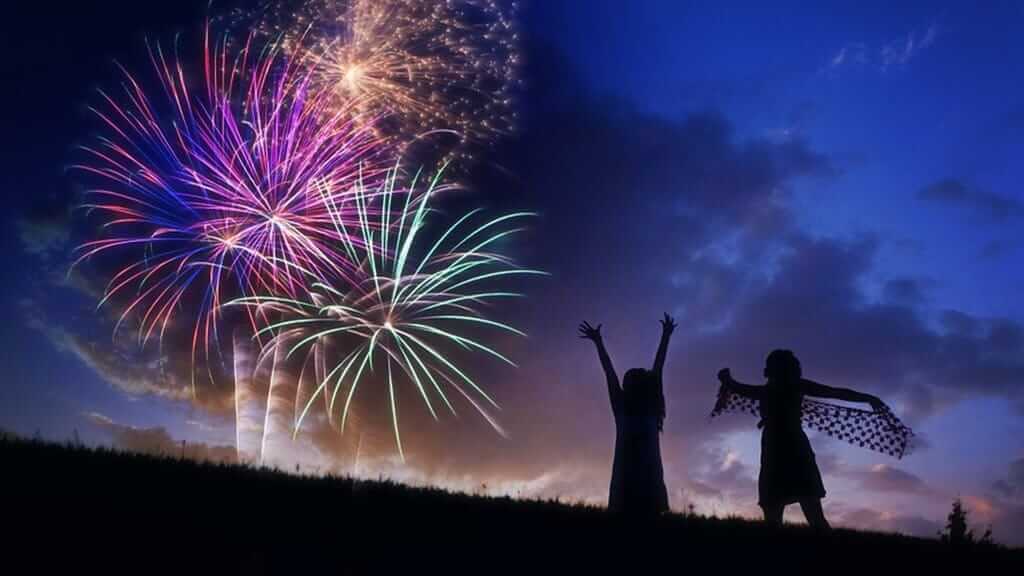 In the major cities across the country, and starting in the days leading up to the New Year, teens take to the streets to block traffic. Using a rope or chain to block the road, groups of youngsters halt traffic, car by car, and demand a small toll (usually a few coins is enough) before letting you you pass.

Other Ecuadorian New Year’s traditions include:

• Running up and down the block with an empty suitcase to signal future travels in the new year.

• Carrying a pocketful of lentils during the countdown to welcome an abundance of good fortune.

• Lighting of different colored candles – blue for peace, red for passion, yellow for abundance, and orange for intelligence. So, wherever you are in Ecuador on New Years Eve, and whoever you are with, you are guaranteed a great outdoors party waiting for you to join in! Just be open to the customs and traditions, and who knows what the new year might have in store for you! 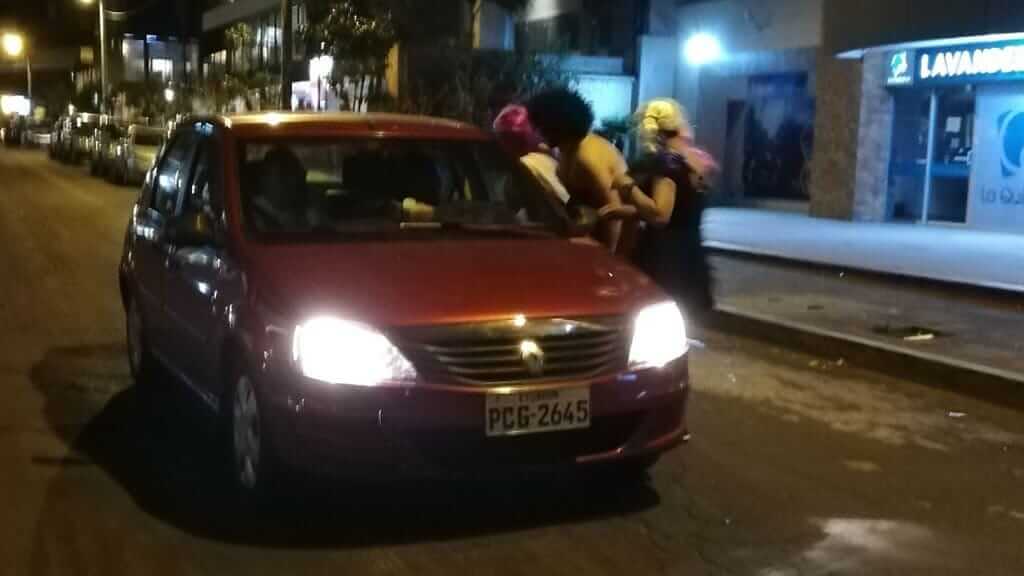 Contact us to custom make a trip which includes enjoying these unique New Years celebrations.

The next time you are looking for a different place to celebrate New Years, instead of the crowded Times Square and the more traditional bars, pubs, and restaurants, why not try something new? Happy Gringo invite you to join us for New Years in Ecuador.